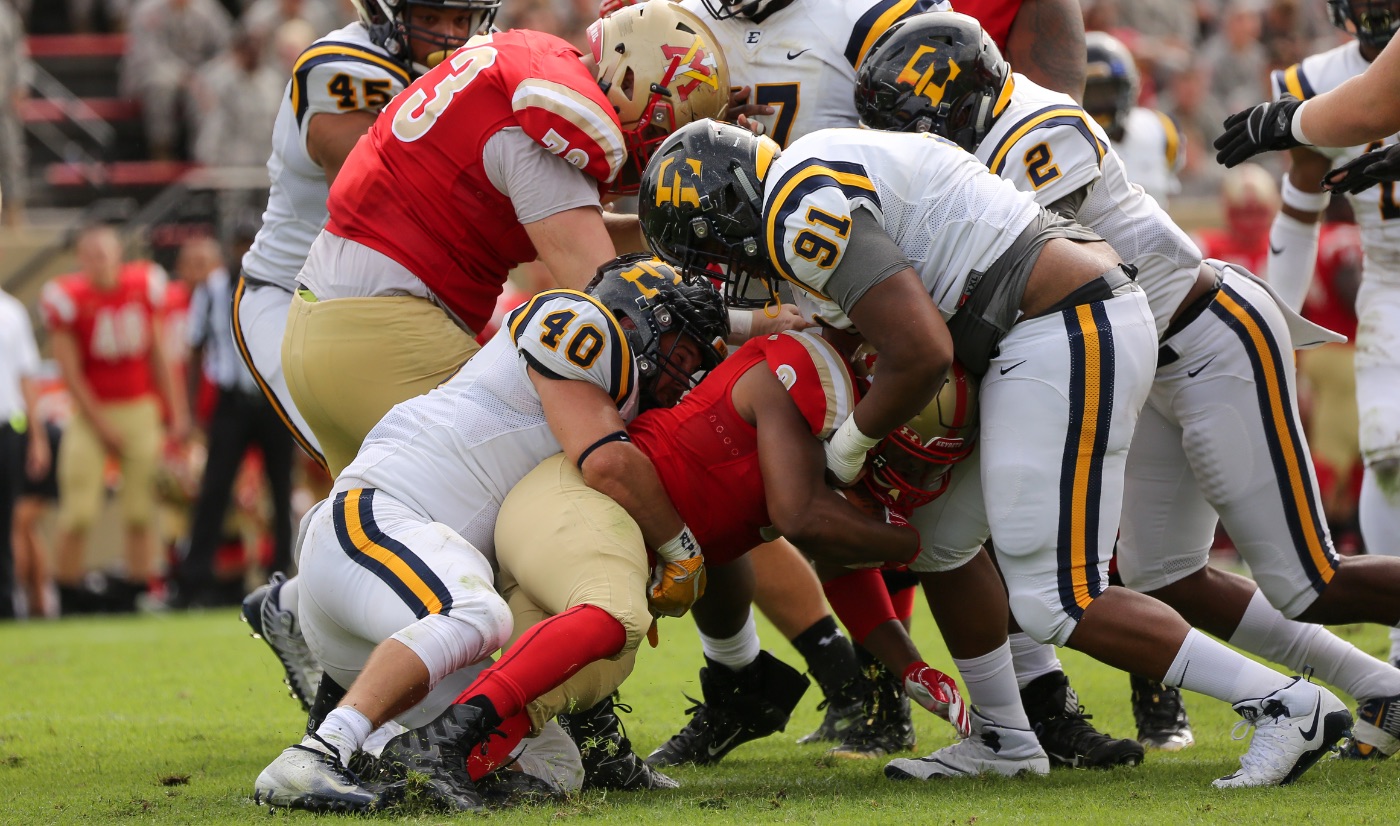 LEXINGTON, Va. (Sept. 14, 2018)– It was not easy, but for the first time since rejoining the Southern Conference in 2016, the ETSU football team enjoyed a road victory in league play as the Buccaneers secured a 27-24 win over VMI Friday afternoon at Foster Stadium.

Shored up by a defensive unit that held VMI to minus 28 yards rushing, collected eight sacks and forced six turnovers on the day – including five interceptions and a fumble recovery – the Buccaneers overcame four turnovers of their own and 142 yards in penalties to take the victory. In fact, the game was still in doubt in the waning seconds until the Bucs defense forced a VMI turnover on downs deep in ETSU territory with 41 seconds left in the contest.

With the win, the Bucs improve to 2-1 overall and 1-0 in SoCon play, as they return to Johnson City for a matchup with rival Furman next Saturday evening at William B. Greene, Jr. Stadium at 7:30 p.m. Counting the Bucs’ absence from football spanning 2002 to 2015, the team went 5,831 days between road wins in SoCon play. The last was a 27-7 victory at Western Carolina back on Sept. 28, 2002.

Meanwhile, the Keydets drop to 0-3 and have lost 20 straight games since last winning in 2016.

“I thought our defense played really well and anytime you force six turnovers that’s a good thing,” said first year head coach Randy Sanders. “But on the flipside, we gave them 14 points with our own turnovers. I thought the guys played hard, but we have to learn to play smart. Sometimes it’s just common football sense, and it seems sometimes we lose that. We have to eliminate those mistakes.”

Sanders said despite those issues, it was good to go home a winner. Along with the first conference road victory in 16 years, it was the Bucs second road win in total since returning to the football field in 2015.

“I told the guys we had a chance to do something that hasn’t happened here in a long time — and we did it,” said Sanders, referencing the Bucs’ win over Kennesaw State in the 2016 season opener. “But when you’re on the road in conference play, it’s always tough and we needed to learn how to do that.”

On the defensive side of the ball, senior transfer linebacker Jared Folks (Harrisburg, Penn.) and junior defensive back Jeremy Lewis (Lawrenceville, Ga.) led the way, as each collected seven tackles and an interception. Folks also finished with 3.5 sacks and a fumble recovery.

As for the offense, the Bucs rushed for 143 yards, marking the third straight game with 100-plus yards on the ground as a team. This is the first time since the 2016 season the Bucs can claim that distinction. However, the offense did struggle to move the ball for much of the contest, as senior transfer quarterback Logan Marchi (Winsted, Conn.) was 15-of-36 on the day for 181 yards and three interceptions.

The Bucs will return to Johnson City and begin a three-game home stand next Saturday when they host Furman at William B. Greene Jr. Stadium at 7:30 p.m.