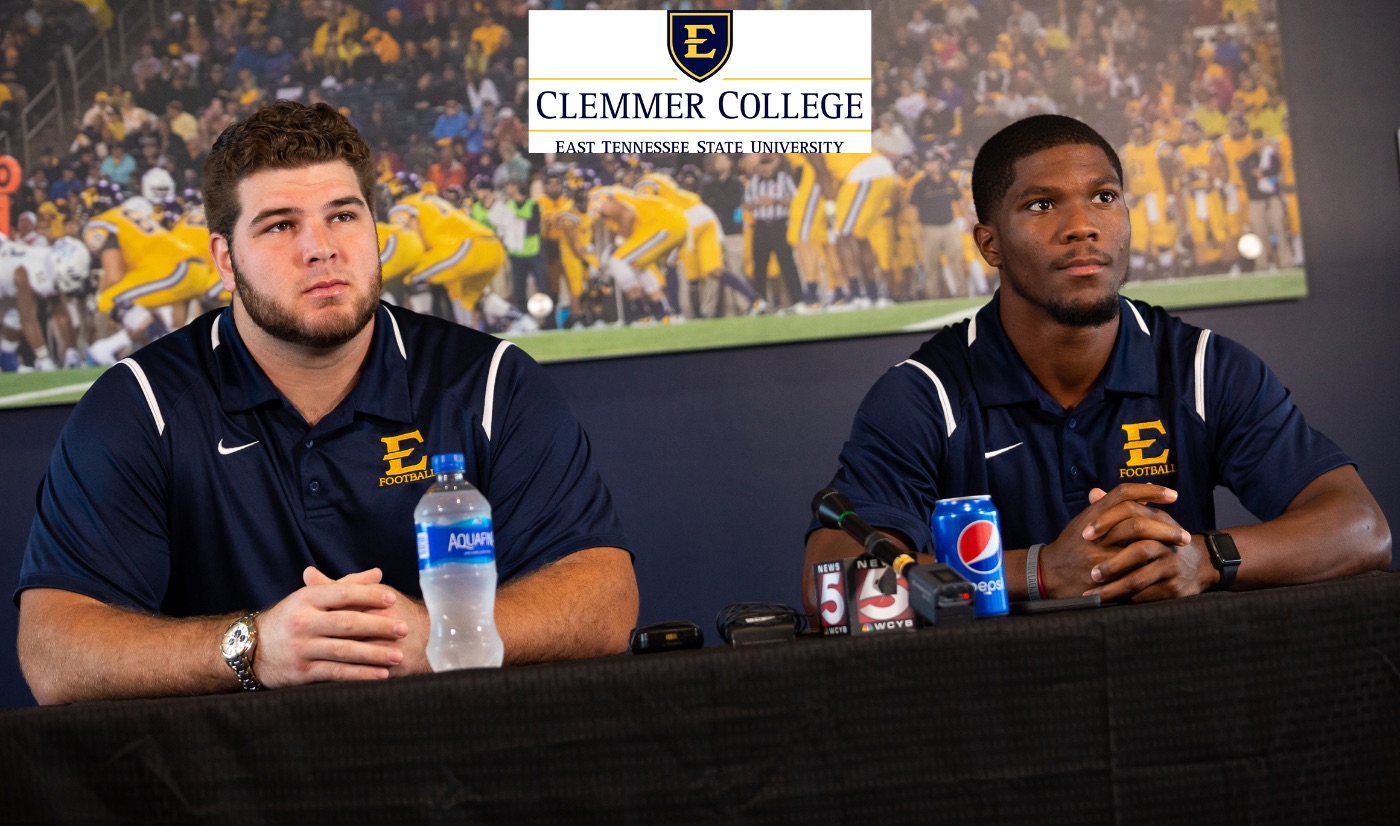 JOHNSON CITY, Tenn. (Sept. 17, 2018)– Coming off its Southern Conference road win at VMI last week, the ETSU football team met the media to look back on that game, while also previewing this weekend’s home matchup with Furman.

Below are comments from Coach Sanders, Blackmon and Francois.

ON GETTING FRIDAY’S GAME AT VMI PLAYED

Sometimes having a few extra days helps, but playing, I think helps as much as anything else. I know with where we are as a football team, we needed to play. We need to get out there on the football field. You practice, you prepare Tuesday, Wednesday, Thursday and Friday, and then Saturday's kind of the test to where you get to see what you've really learned and gauge where you're really at. We need all those days of preparation and all the exams we can get, in order to get where we want to be by the time the season's over.

ON THE PLAY OF SPECIAL TEAMS AT VMI

Specials teams has made a huge improvement, and we challenge them to do that. We had the punt return early, hit the big kickoff return right there before halftime, and JJ stepped up with the two field goals for us in the first half. I thought our protection was better. Our holder is doing a nice job and JJ is kicking them through. Obviously, the punting there in the fourth quarter, to be able to play field position and flip it, played a huge part of the game.

ON GETTING THE ROAD CONFERENCE WIN

First off, we're going to take the win. Anytime you haven't won a conference game on the road in 16 years – granted a few of the years we didn't have football, but it was still 2002 – I even got confused about who was President in 2002. To get the conference road win was big. We have to learn how to win, but we have to learn how to win on the road. If we're going to achieve what we want to achieve as a team and as a program, which is to compete for championships and being in the championship mix, you have to win on the road. So we're awfully proud of that.

ON NEVER LOSING SIGHT ON THE FUNDAMENTALS

You’re always preparing for the opponent. You're always working on schemes, plays, coverages, defenses, blitzes, whatever it may be. But at the same time, as coach, you can never overlook the fundamentals. You can never overlook proper tackling technique, and how to tackle. Having your base, when you're blocking, or taking care of the football, and carrying it high and tight when you're running it, or your footwork, things like that is a quarterback in the pocket. You never let the fundamental things slide.

We still have miles and miles to go on basic fundamental stuff. I haven't been a part of that many football teams where three games in, you had all the fundamentals down. It's amazing how you work on all those things during spring practice. You work on all that here in fall camp. You think you got them, but once you get out there in the game, guys will forget everything they know.

ON DEFENDING THE HOME TURF

We went 4-2, so we had success last year. We want to be undefeated at home this year. That's one of our goals. One of our objectives is to defend Greene Stadium, and we want this to become a hard place to come play. All that being said, we want to win on the road, too. So I want a lot… and that's what I expect. You’re not going to win championships until you learn to win on the road, but you're definitely not going win them until you win at home.

ON WANTING TO GET OFF TO A FAST START VS. FURMAN

ON THE PLAY OF THE DEFENSE

I've been pleased with the way the defense has played this year. There's no question, we have to cut down on some of the penalties. That's one of the things that's hurting us. I think we had three pass interference penalties and a couple of unsportsmanlike conduct penalties. I think we had seven 15-yard penalties in the last game. We have to eliminate those things. If we can eliminate those defensively, I really like where we're at. I like the way the guys are playing. I like the way they're competing.

ON THE OFFENSIVE LINE

I think a lot was made of the offensive line when I first got here. When I watched them on tape, I didn't think it was quite as bad as I was hearing. They have gotten better, no question, they've taken to the challenge. I think they got tired of hearing about them.

Coach McCutchan is coaching them hard and I'm also on them. They are probably get tired of hearing me. I'm not going to settle for less than what I think is championship-level performance. Once we get that, then I'll probably get quiet and they won't hear from me as much at practice.

ON NOT ALLOWING LOGAN MARCHI GETTING SACKED AT VMI

ON THE OFFENSIVE LINE MAKING IMPROVEMENTS

We need to eliminate the mistakes. Whether it’s the little mistakes or big mistakes, we are still making those and we need to fix them. We can eliminate those mistakes. We just have to go out there and do it. It starts with practice and working hard to get better.

ON HOME VS. ROAD PREPARATION

ON THE DEFENSE GETTING FIVE INTERCEPTIONS

Coach Brown is doing an excellent job in practice in getting the defensive backs ready and prepared for games. We have really good defensive backs, and if they play the way they can, they have a lot of confidence in themselves.

They have some pretty big backs. They also have a freshman and a redshirt freshman quarterback, so we need to try and get after them a little bit. They do the same stuff they did last year, which helps us with the triple-option because we practiced it a lot. We go over the triple-option once a week to get ready for teams like this.

ON WINNING AT HOME

Personally, home games are more important than road games, because you don't want to get embarrassed or get beat at home. Our fans show up at home, so we want to give them a show and give them the win.