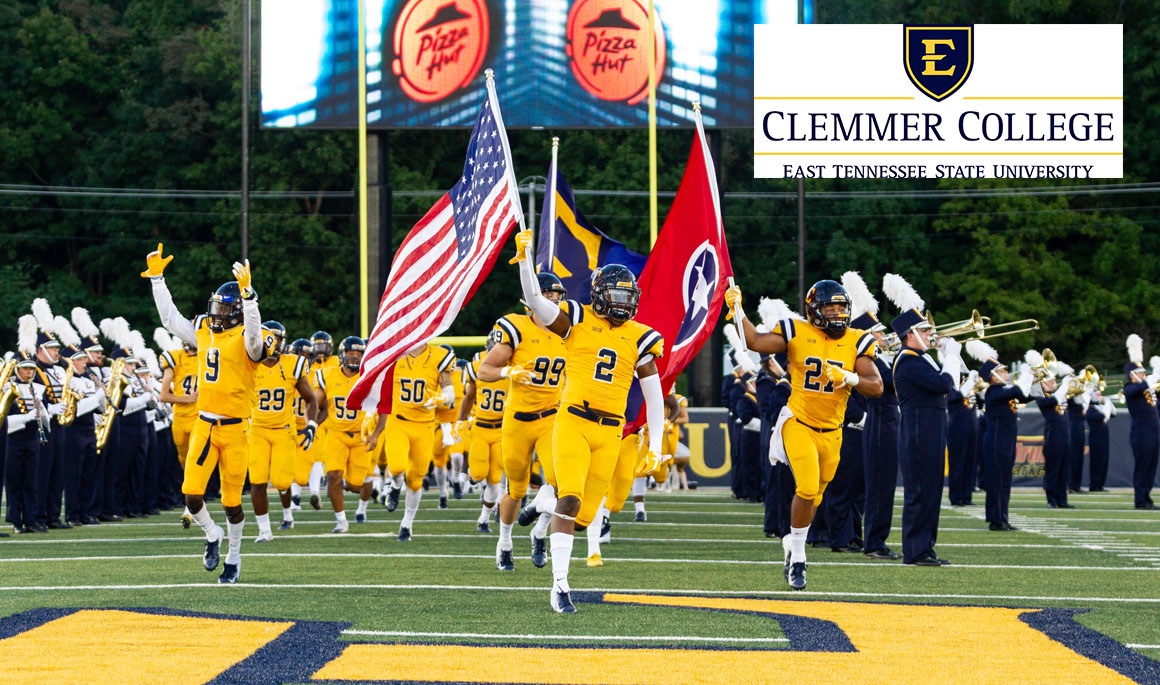 ETSU (2-1, 1-0) is coming off a 27-24 win at VMI last Friday in Lexington, Va., marking the Bucs’ first SoCon road win since rejoining the conference in 2016 …  The Bucs went 5,831 days between road wins in SoCon play with the last was a 27-7 victory at Western Carolina back on Sept. 28, 2002 (Please note, the Bucs were without a program from 2004-2014)  … ETSU’s defense held VMI to 277 yards of total offense – 305 passing and negative-28 rushing … The negative-28 rushing yards ranks as the second-fewest yards allowed by an FCS team this season – Illinois State held St. Xavier to -30 yards on Sept. 1 … The Bucs’ eight sacks were the most since recording eight in last season’s win over Robert Morris (Oct. 7, 2017) … Jared Folks totaled 3.5 sacks which are the most by an FCS player this season and fourth-most in ETSU single-game history … Five Bucs recorded interceptions in the win – Jeremy Lewis, Domenique Williams, Jared Folks, Karon Delinceand MJ Woods… The Bucs five interceptions are the most in a single game since the program returned in the fall of 2015.

A Buccaneer win tonight would mark ETSU’s 347th victory in program history, while also marking the first time ETSU won its first two SoCon games to start a season since 2002 when the Bucs defeated VMI and Western Carolina … A win would also mark the Bucs’ best start to a season since opening the 1999 campaign 4-0 (Please note, the Bucs were without a program from 2004-2014)

ETSU has won five of its first seven games played inside Greene Stadium, with the two setbacks coming within a single score as the Bucs dropped a 31-25 decision to then-No. 13 The Citadel last Sept. 16 and 31-24 game to then-No. 8 Wofford on Oct. 28 … In the seven games played inside its new home, ETSU is outscoring the opposition, 174-111 while holding its foes to 16 points per contest … The Buccaneer defense is limiting opponents to 303 yards per game (154 yards rushing/149 yards passing) … In six home games a year ago, ETSU rushed for only 469 yards (78.2 per game); however, in this year’s season opening win vs. Mars Hill, the Blue and Gold totaled 238 yards on the ground … JJ Jerman is 19-for-19 in PATs in the first seven games inside Greene Stadium … Linebacker Dylan Weigel has totaled 62 tackles and two fumble recoveries in seven career games in Greene Stadium, while Nasir Player has 48 tackles, 11 tackles for loss, 5.5 sacks and one interception in his first seven games played on the new turf.

ETSU linebacker Jared Folks was tabbed SoCon Defensive Player of the Week on Monday following his career performance in the Bucs’ win at VMI on Sept. 14 … Folks led the Bucs with eight tackles, 3.5 sacks, an interception and one forced fumble in Friday’s 27-24 win at VMI. The Buccaneer linebacker was one of five Buccaneers to record an interception in the game, which was one shy of tying the single-game program record. Folks also helped hold the Keydets to -28 rushing yards, which is the second-fewest rushing yards allowed by an FCS team this season … Folks had 3.5 of the Bucs’ eight sacks, which marked the most since recording eight in last season’s win over Robert Morris. The 3.5 sacks are the most by a SoCon player since Furman’s Mitch McGrath totaled four against Chattanooga on Oct. 29, 2011, while ranking fourth in program history.

Quan Harrison also made history in the Bucs’ 27-24 win at VMI on Sept. 14 … The Buccaneer wide receiver returned the first punt of the game 69 yards for a touchdown to put ETSU ahead, 7-0, in the first quarter … Harrison, an all-SoCon return specialist, became the first ETSU player since Anthony Stringfield to accomplish the feat as his return came on Oct. 11, 1997 vs. The Citadel (91-yard return) … Harrison is the first player in the SoCon to return a punt for a score this season and is the fifth-longest punt return in FCS play this season … Harrison is one of 19 players in the FCS to return a punt for a touchdown this season.

Senior kicker JJ Jermanis also kicking his way up the ETSU record book … Jerman, who tied the all-time program record with his two field goals at VMI on Sept. 14, enters Saturday’s game with 37 career field goals … Jerman is currently tied with Jerry Chapman (1995-97) for the most in school history … Jerman also ranks third all-time in Buccaneer history in extra-points (68) and fourth in scoring (179) … Jerman is two points away from passing Mike Shoun (1987-89) for third all-time on ETSU’s scoring chart and five PATs shy of passing Shoun for second all-time.

Furman enters Saturday’s game with an 0-2 record after falling to No. 2 Clemson 48-7 to open the season, while dropping a 45-7 decision at then-No. 15 Elon back on Sept. 8 … Furman’s game vs. Colgate last weekend was cancelled due to Hurricane Florence … Furman entered the year ranked 21st nationally in the FCS.

The Paladins return 15 starters off last year’s team that posted an 8-5 record and advanced to the second round of the Football Championship Subdivision (FCS) playoffs under first year head coach Clay Hendrix, the consensus SoCon Coach of the Year in 2017.  Following an 0-3 start a year ago, the Paladins reeled off seven straight wins and competed for share of the SoCon championship in the regular season finale, dropping a 26-20 verdict to Samford.  A 28-27 road win over Elon in FCS first round playoff action ensured the Paladins a No. 19 ranking in the final STATS FCS poll — Furman’s first Top 25 poll finish in five seasons … 13 Paladins earned All-SoCon honors in 2017, highlighted by All-America center Matthew Schmidt, who extended Furman’s unmatched tradition of producing Jacobs Blocking Award winners by becoming the school’s 13th recipient (and seventh Hendrix pupil) to capture the prestigious honor.

In its first two games, Furman has only totaled 23 passing attempts with Darren Grainger accounting for 16 attempts and JeMar Lincoln making seven attempts … The Paladins have also been sacked six times for negative-25 yards

Kealand Dirks is averaging 4.1 yards per game – 21 rushes for 87 yards and has yet to be stopped behind the line of scrimmage … Corey Watkins has nine rushing attempts for 58 yards (6.4 yards per carry) and also hasn’t been stopped behind the line of scrimmage … Ten different players have accounted for Furman’s 104 rushing attempts

Elijah McKoy leads the team with 18 tackles, while also adding 2.5 TFL and one sack, while Bryan Okeh has 11 tackles … Adrian Hope has accounted for Furman’s other sack this season

Saturday’s game will be streamed live on ESPN3 … David Jackson will handle the play-by-play duties, while former ETSU quarterback and Hall of Fame member Mark Hutsell will be the color analyst and Kasey Marler will handle sideline reporting.

ETSU continues its homestand next weekend as the Bucs host in-state rival Chattanooga on Saturday, Sept. 29 … Kickoff is set for 7:30 p.m. at Greene Stadium.