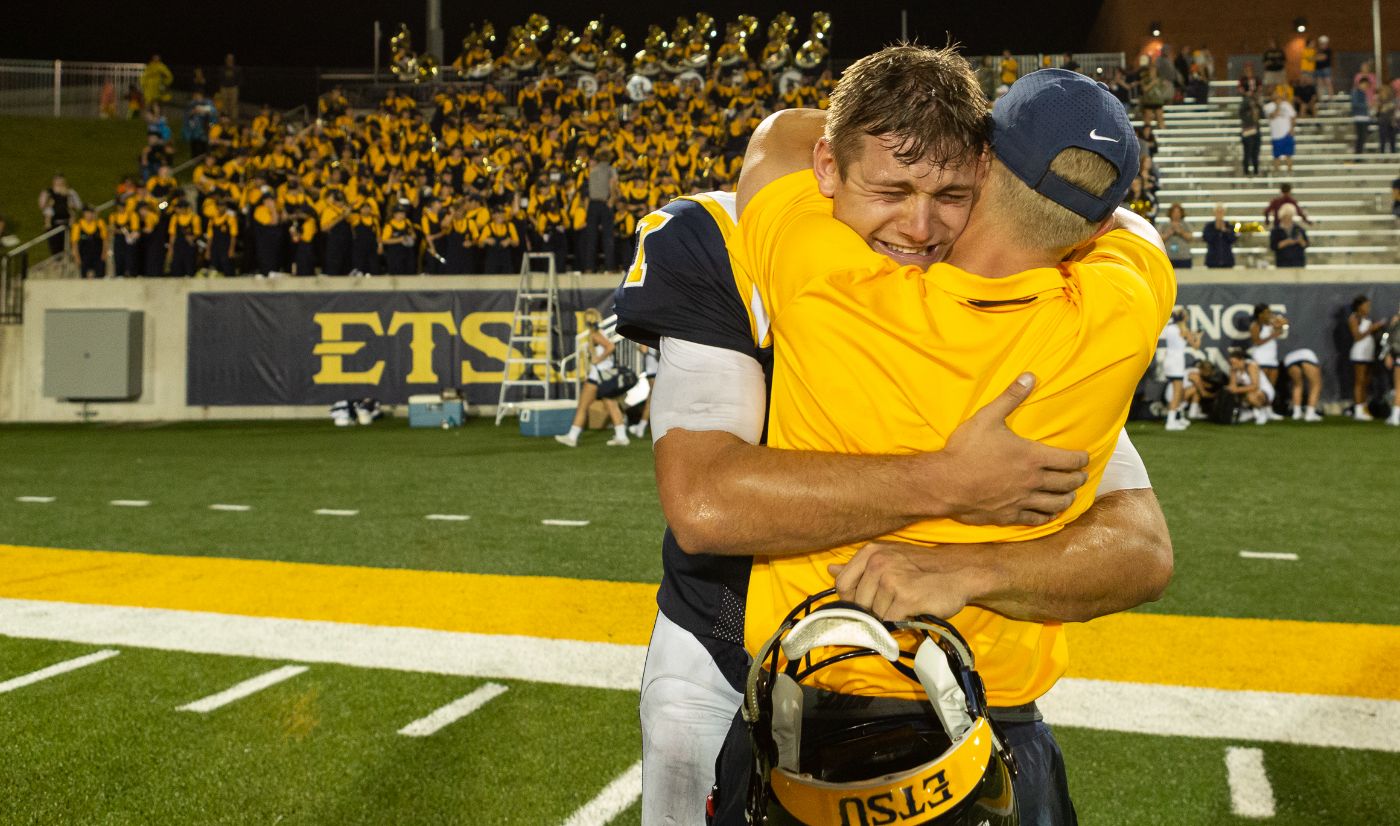 JOHNSON CITY, Tenn. (Sept. 22, 2018) – It will be remembered as one of the storybook games in the history of ETSU football.

Senior quarterback Austin Herink (Cleveland) came off the bench midway through the third quarter with the Buccaneers trailing rival Furman, 27-6, and quickly ignited an improbable comeback that saw ETSU score 23 unanswered points to shock the Paladins, 29-27, Saturday night inside William B. Greene Jr. Stadium. In a fitting moment for such a wacky game, the winning score came thanks to a defensive safety courtesy of senior linebacker Dylan Weigel (Pickerington, Ohio), who tackled Furman running back Darius Morehead in the Paladins’ end zone for the go-ahead score with just over two minutes left in the contest.

With the win, the Bucs moved to 3-1 overall and a perfect 2-0 in Southern Conference play as they prepare for a visit from rival Chattanooga next Saturday night at Greene Stadium. At 3-1, this is the best start for ETSU since the 1999 squad began the year at 4-0. Meanwhile, Furman dropped 0-3, 0-1 before a crowd of 8,453 fans.

In just a quarter and a half of play, Herink finished 9-of-14 on the night for 202 yards and a touchdown through the air. He also added 10 yards rushing. Redshirt freshman tailback Quay Holmes (Powder Springs, Ga.) rushed for 102 yards and two scores on the night, as the Bucs collected 104 yards on the ground, eclipsing the 100-yard mark for the fourth straight game. It’s the first time the Bucs have accomplished that feat since the 2003 season.

Defensively, senior lineman Tremond Ferrell (Washington, Ga.) had a game and career high 12 tackles, while Weigel finished with nine stops. Ferrell also added two sacks in the game. Weigel’s huge play on the safety was only made possible because Furman kick returner Dejuan Bell inexplicably did not make a fair catch signal on the kickoff following ETSU’s game-tying score. Instead, Bell simply took a knee and downed the ball at the Paladins’ 3-yard line. Two plays later, Weigel made his big stop and the Bucs led for the first and only time in the game.

The contest, which also included a 45-minute lightning delay during halftime, was still very much in doubt even after the Bucs took the lead. Following the safety, Furman kicked the ball to the Bucs and then held ETSU on three downs. The Bucs were forced to punt to Furman with 1:38 left on the clock, but again the defense rose to the occasion and ended the Paladins’ hopes.

The Bucs will remain at home for the second game in their current three-game home stand when they host longtime rival Chattanooga at 7:30 p.m. next Saturday inside Greene Stadium.