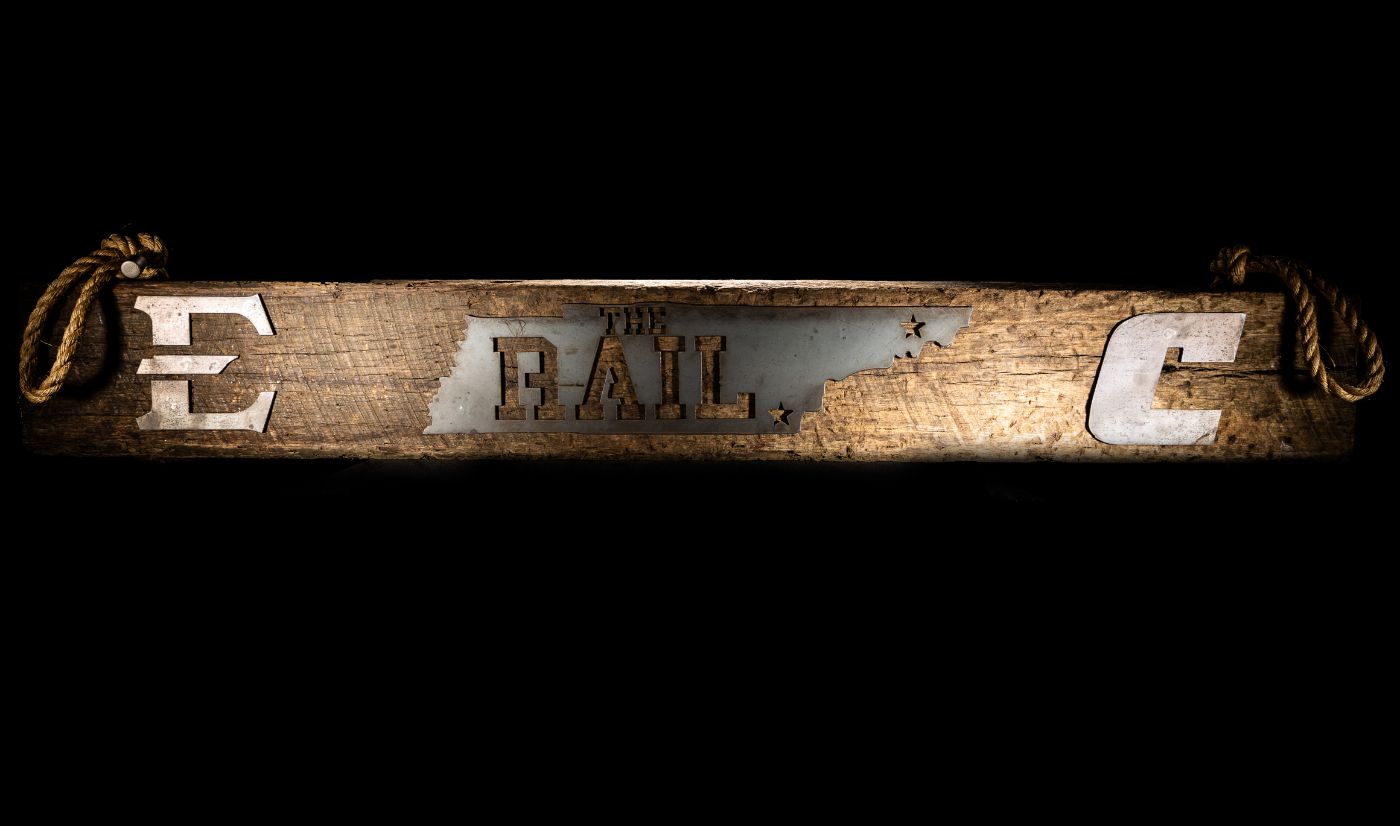 The Rail will add a new element to the long tradition of the ETSU and Chattanooga rivalry.
ETSU, Chattanooga unveil new Rail trophy for football
Related Links

JOHNSON CITY, Tenn. (Sept. 24, 2018) – The rivalry between ETSU and Chattanooga football will take on a new tradition this weekend, as the “Rail Rivalry” will be born with the introduction of a new railroad-inspired trophy that will go to the winner of the annual contest.

Because both universities and the cities in which they are located share a proud history within the railroad industry, the new rail trophy will stand as a symbol of that heritage and provide both teams an extra incentive to bring home The Rail each year. The Rail will move back and forth between the programs depending on the winner of the game and that exchange will occur on the field following each contest. The Bucs and Mocs will meet inside William B. Greene Stadium at 7:30 p.m. on Saturday night to determine who will take home The Rail first.

The Rail, which is made from a former railroad tie that once connected Johnson City and Chattanooga, was produced and constructed in tandem by ETSU’s Assistant Director for Grounds/Landscaping Sean Morris and Science Hill High School instructor Brent Sluder. Weighing 108 pounds – which represents the halfway point of the 216 miles that separate Johnson City and Chattanooga – and measuring five feet, seven inches in length – to represent the 57 years since the teams’ first meeting in 1961 – The Rail incorporates not only the wood of the railroad tie, but steel in honor of the rails that connected the ties on the track. The Rail also includes stars in the state of Tennessee to represent Johnson City and Chattanooga. In addition, the logos of both athletic programs will be included on The Rail.

“The Rail literally personifies a decades-long rivalry between two proud universities,” said ETSU Athletics Director Scott Carter. “Having personally participated in this series, it’s special to work alongside Chattanooga’s athletics program to provide an added incentive for the student-athletes that will play in this rivalry game for years to come. This already meaningful game will now have its own classic, annual award for the victor.”

Chattanooga’s Vice Chancellor and Director of Athletics Mark Wharton agreed that The Rail will only add to an already strong tradition.

“UTC has a long and storied history of competition with ETSU,” Wharton said.  “The introduction of the “Rail Rivalry” enhances the level of competition between our two great institutions and brings an even bigger sense of pride to the winning side each year.

While most people think of the Glenn Miller Orchestra’s 1940s song, Chattanooga Choo Choo, when asked about the city’s connection to the rail industry, the fact is Chattanooga was a major hub long before the song became popular. As a popular connection point and major southern terminal stop, the city’s roots with the railroad are deep.

Meanwhile, in Johnson City, George L. Carter was building 277 miles of tracks through Eastern Kentucky, Tennessee and the western Carolinas in the late 19th century to move coal throughout the region. Carter, whose 120-acre farm was located in Johnson City, later granted the property and offered an additional $100,000 toward the establishment of a normal school that would ultimately become East Tennessee State University.

On the football field, the Bucs and Mocs have met 41 times overall, with Chattanooga holding a 22-18-1 advantage over ETSU in a series that dates back to 1961. The Bucs have won seven of the last 12 meetings, but the Mocs have a two-game winning streak heading into Saturday’s game.

“ETSU has been an outstanding rival throughout the history of our program,” said Chattanooga head coach Tom Arth. “We are glad they are back in the Southern Conference and look forward to continuing that tradition for years to come.”

“I’ve had the opportunity to play in rivalries where a trophy went to the winning team, and it adds something special to those games,” Sanders said. “This will give our team another goal and a since of tradition when we line up every year against Chattanooga. We’re looking forward to doing that again this weekend.”