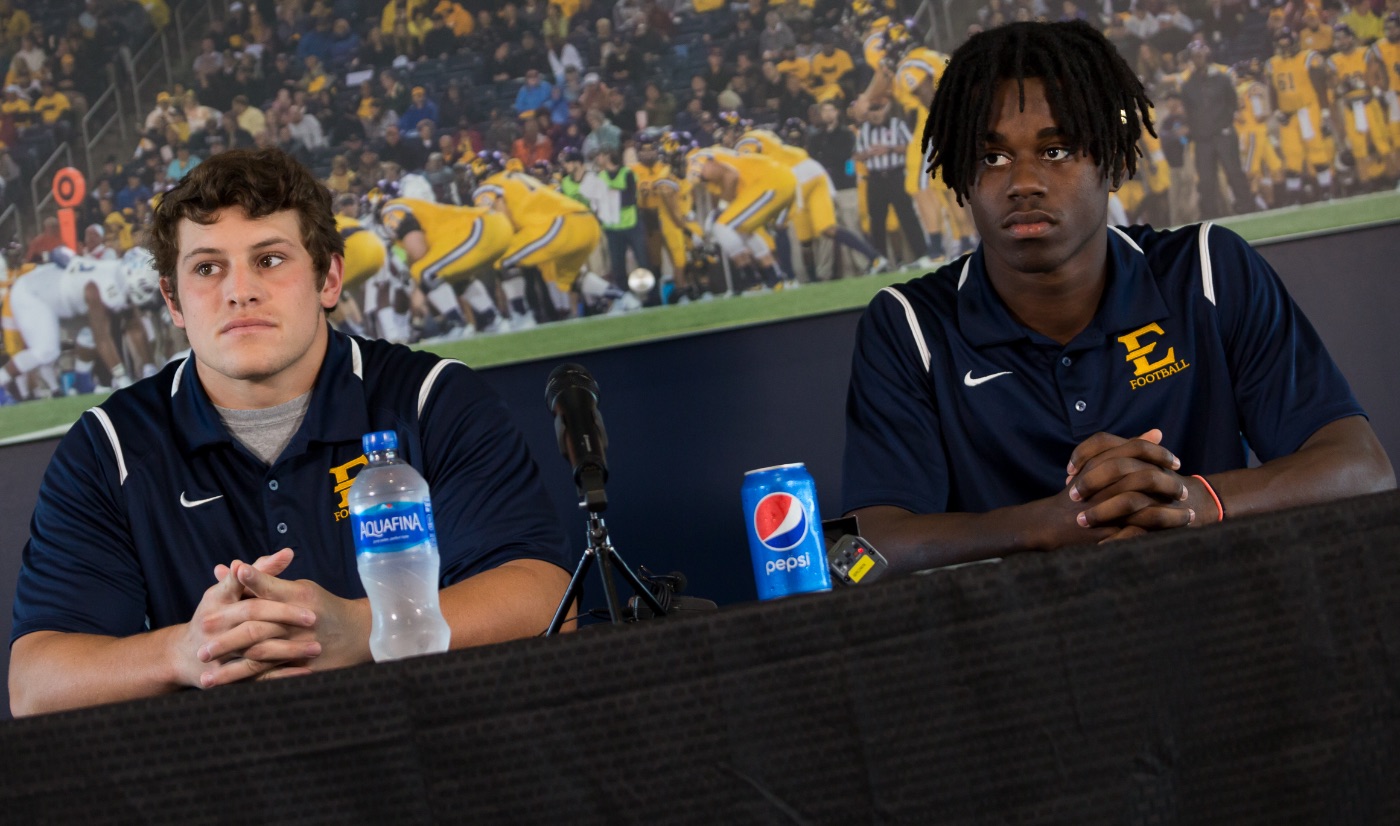 JOHNSON CITY, Tenn. (Oct. 8, 2018)– The ETSU football team began preparations for Week 7 as the Buccaneers met the media on Monday to recap last week’s win over Gardner-Webb and look ahead to this Saturday’s Southern Conference road game at The Citadel.

Below are comments from Coach Sanders, Lewis and Hill.

I hope our fans enjoy it. It's week seven. It doesn't matter at this point. What matters is once the season's over where we are ranked. I'm not going to enjoy it right now. I hope our players don't enjoy it too much. I hope our fans do and I hope they're enjoying it again next week at this time. We have to go take care of our business on Saturday. What is happening outside the program is beyond our control. I want our guys to worry about what we can control, and that's what I'm worried about.

ON MAKING EVERY POSSESSION COUNT VS. THE CITADEL

ON PREPARING FOR THE OPTION

It's difficult obviously, because you normally don't have a quarterback that's doing this. The other thing that's really difficult to replicate in practice is sometimes the amount of cutting, where the linebackers get cut and the defensive linemen get cut, and just the nature of that offense. It's certainly legal, it's not illegal, it's not "dirty football" or anything like that. That's just the way they play football with that offense. It’s the part that's hard to replicate because obviously you have to practice it and your guys have to get used to playing those type of blocks. You don't want to do it so much that somebody goes into the game limping.

Coach Taylor and the staff talk about option football, and we talk about defending the option. We took time back there in fall camp and worked on defending the option, because we knew these weeks were coming. It's hard to get prepared in just one week. It takes some time. So, if you don't start early, and you don't build it into what you're doing, it's certainly more difficult than the way Coach Taylor and the defense prepares. Starting from day one, the way the defenses are installed and taught, it gets us prepared for these weeks. It's going to be a challenge.

CAN THIS DEFENSE STOP THE OPTION

I certainly expect them to. They play good defense and we have good players. I think they (The Citadel) have a good attack. They certainly know what they're doing. They're good football coaches but they're good football players, too. In a lot of ways, it's almost a battle of wills. Defensively, you have to maintain your eye discipline. You cannot get outside the discipline of the defense because every piece has to fit together. Somebody has to take the dive, somebody has to take the quarterback, somebody has to take the pitch. At the same time, the secondary has to be defending the pass, and if any one of those aspects of the defense breaks down, you give up plays. To do it over and over and over and over, takes a lot of mental toughness from your defensive players.\

ON PLAYING THE CITADEL AT FLORIDA STATE

In 2014, when I was at Florida State and we played Citadel in Tallahassee and beat them 37-7. I think a lot of the fans were disappointed, but we scored on I think seven of the nine possessions – the first seven possessions that we had the ball – we scored. We only had it nine times. The two times we didn't score was late in the game when we were playing a lot of the backups. So, as good as that football team was at Florida State, they (The Citadel) were able to limit us to only nine possessions against our defense. It makes you execute when you get your opportunities and it makes you stay locked in from a mental standpoint. When you get the opportunities to make plays, you have to make them. You can't let those opportunities go by the wayside. That's one thing I think we are getting better at offensively is hitting plays when they're there, whereas earlier it seemed like we were wasting a lot of those opportunities.

ON LETTING THE DEFENSIVE COACHES COACH

I look at the opposing team's offense each week and if there's anything in particular I see or I think may help, I certainly throw it out there. For the most part, I tell Coach Taylor and the defensive staff, "If you need my help, holler at me." We have good defensive coaches and they know what they're doing. I don't need them coming over trying to tell me offensively what we need to be doing, so I'm not going to stick my nose in it more than what I feel is necessary.

ON CLOSING VS. GARNDER-WEBB AND NOT VS. CHATTANOOGA

I thought Gardner-Webb was going to be a challenge for us going into the game. It was probably the best game we played on both sides of the ball to date. As far as playing together.  It was definitely the best 60 minutes of offensive football we've put together at one time. It’s all a process and we are always looking to get better.

ON THE PLAYERS ECHOING WHAT HE HAS TO SAY

It’s a 60 minute game and you have to always continue playing. You hear all the coaching clichés about it's one game at a time. They're clichés because they're true. I tell the players all the time, when the reasons for winning change, I'll change.

ON HIS NEW POSITION THIS SEASON

Last year I was playing the field side and now this year I am on the boundary side, so everything comes quicker and there’s less field to work with. I can get in there a lot more than I usually would on the field side.

It's easy to get caught up with all the motions and stuff going on in the back field, but if you tune that out, take care of what you need to take care of, then we should have no problems dealing with any surprise pass plays.

Coach Sanders is a very strong leader and he’s passionate about what he coaches. It helps us all love the sport even more, especially when we're winning. Coaching us how hard he is coaching us is making us practice even harder, play even harder, because we have a certain expectation he wants us to get to. As we are trying to reach the expectation he wants us to get to, this is pushing us to the next level.

ON PLAYING THE CITADEL AND WOFFORD BACK-TO-BACK

Playing them is always fun. That's when you get down and dirty and get to fill gaps more than I normally would. I know that the defensive line and linebackers are really looking forward to it because that's where they shine at. That's where their stats come from. With the game plan set up, I have no doubt that we'll be able to handle both teams back to back.

ON BEING RANKED IN THE TOP 25 POLLS

It's good that this has finally come true because Coach Sanders says every week that we're continuing to play for respect, but we have to treat success the same way we treat failure. We have to come out and win every week.

I think Coach Sanders is definitely setting a new standard of expectations. It's never good enough, and that we have to continue to improve every week. He always focuses on what we can do to get that extra yard or that extra first down; that may make the difference later in a close game.

ON RISING TO COACH SANDERS’ EXPECTATIONS

Part of that is we have a very good group of veteran guys that have been around here for a while. They're trying to set the standard and make sure that all of the young guys know to get on board, lead, follow or get out. We're going to try to get in and continue to get better every week.

ON THE OFFENSIVE LINE

There's a lot of communication up front, and the offensive line right now is playing some of the best ball that they've played since I've been here. In the tight ends room, all we're doing is just trying to capitalize on them, and make the blocks at the point of attack that can get the running backs in some space.

ON QUAY HOLMES AND JACOB SAYLORS

It’s great to play with them. Quay and Jacob both add an element of explosiveness that our offense hasn't seen. Having both of them being able to come in when one of them gets tired or takes a big shot, we don't lose a step anytime with our offense. Their ability to make big plays and capitalize on things like turnovers turns the game really quick.