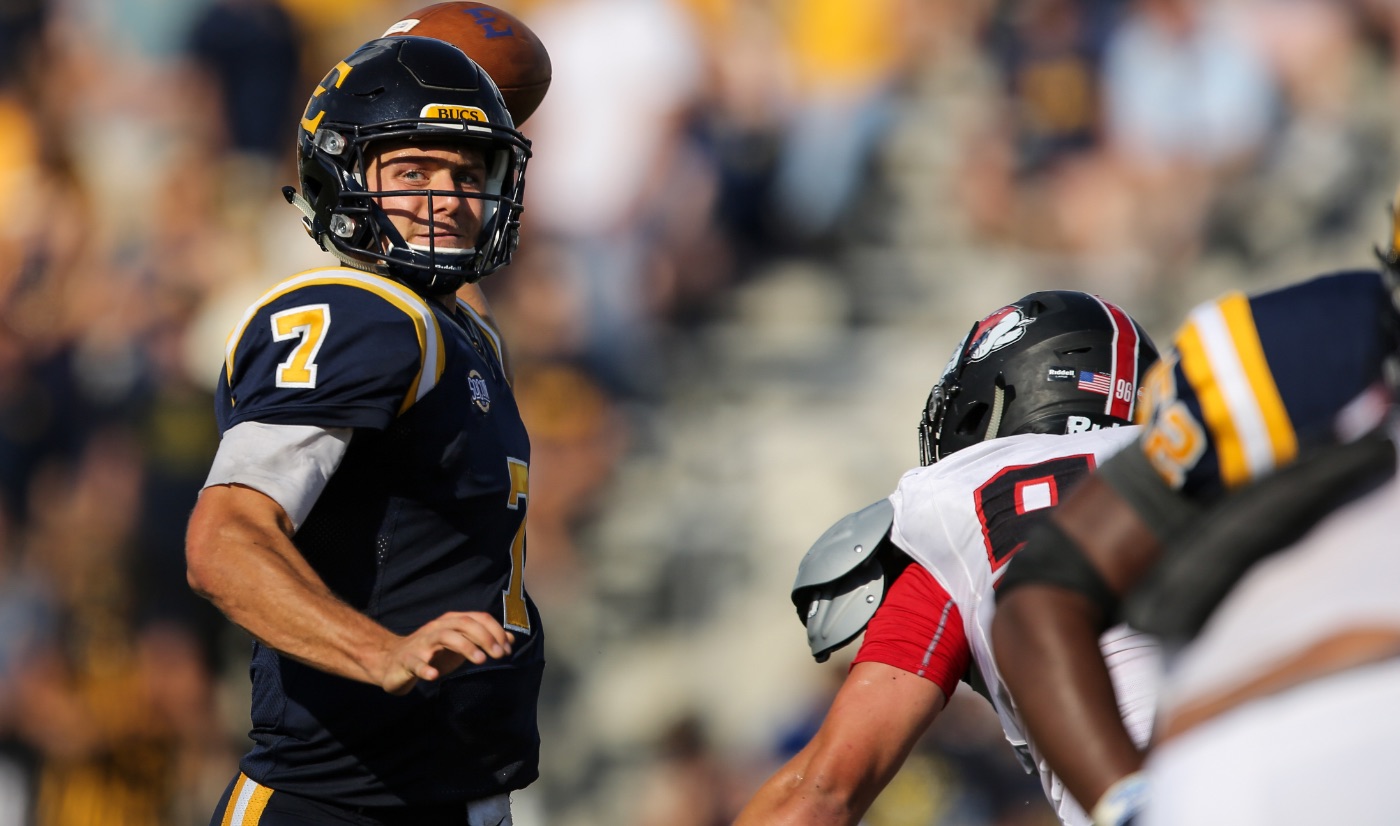 CHARLESTON, S.C. (Oct. 12, 2018) – After stepping out of non-conference play for the final time last weekend, ETSU football returns to Southern Conference action this Saturday when the Buccaneers head to Charleston to take on The Citadel. Kickoff is set for 2 p.m. inside Johnson Hagood Memorial Stadium.

After receiving votes in the Top 25 the last two weeks, ETSU football has finally cracked through in both major polls. The Buccaneers are ranked No. 23 in the STATS FCS Top 25 Poll and No. 24 in the AFCA Coaches’ Poll, as both polls were released on Monday afternoon. The Bucs, who are off to a 5-1 start (3-0 in the Southern Conference), are ranked for the first time since the program returned in 2015. ETSU was last ranked on Oct. 30, 1999 at No. 18.

A BUCCANEER WIN WOULD

A Buccaneer win on Saturday would mark ETSU’s 350th victory in program history, while it would mark the Bucs’ best six-game start to a season since starting 8-1 in 1996 (ETSU’s best start in program history was in 1969 when the Bucs won their first six games en route to going 10-0-1 and defeating Terry Bradshaw’s Louisiana Tech squad 34-14 in the Grantland Rice Bowl) … A win would also be the Bucs’ fifth straight victory, which would be the team’s longest streak since rattling off seven straight games from Sept. 14-Nov. 2, 1996 … A Buccaneer win would also be their fourth straight SoCon victory, marking their longest conference win streak since the 1996 squad won six straight games … ETSU’s three-game SoCon win streak matches the longest since the Bucs won their final two SoCon games in 2003 and then defeated Western Carolina in their return to the league in 2016.

ETSU redshirt freshman running back Quay Holmes was named to the initial STATS FCS Jerry Rice Award Watch List, which was announced by the selection committee on Thursday. Holmes has been a spark for the Buccaneer offense as he has totaled 467 rushing yards and eight touchdowns in six games. Holmes has also added 14 receptions for 124 yards and one touchdown, along with accumulating 753 all-purpose yards. Holmes ranks among the FCS national leaders in numerous statistical categories. The Buccaneer running back ranks fourth in rushing touchdowns and total touchdowns (9) and 34th in rushing yards and all-purpose yards per game (125.5).

The Bucs have won four straight games, marking the first time they have accomplished this feat since opening the 1999 season, 4-0 … During this four-game win streak, the Bucs won their first three games by a combined eight points, while then defeating Gardner-Webb, 45-0, last Saturday in Greene Stadium … During this four-game run, ETSU is outscoring the opposition 31-7 in the first quarter and 37-14 in the fourth quarter … Overall, the Bucs have held the opposition scoreless in eight of the last nine quarters played ... ETSU’s defense has held opponents to 276.8 yards per game over the last four games, while also totaling 268 tackles, 42 tackles for loss, 20 sacks, seven interceptions, seven forced fumbles, five fumble recoveries and one safety … Linebackers Dylan Weigel (30) and Jared Folks (28) have accounted for 58 tackles and 15 tackles for loss, while Nasir Player (3.5) and Folks (5.5) have combined for 9.0 sacks over the last four games … Offensively, Quay Holmes has rushed for 314 yards (78.5 per game) and seven touchdowns, while adding 13 receptions for 108 yards and one touchdown during this run …. Keith Coffee has totaled 15 receptions in the last four games, while Kobe Kelley has nine receptions for 162 yards (18.0 yards per catch) … During this win streak, ETSU has overcome two halftime and two third-quarter deficits – trailing 17-13 at the half and 24-20 at the end of the third quarter at VMI, and was down 13-6 at half and 27-13 at the end of the third quarter vs. Furman.

Follow its 45-0 win over Gardner-Webb last Saturday, ETSU improved to 5-1 on the season … The five wins match the best win total since the Blue and Gold restarted their program (in 2015) as the 2016 team also totaled five victories … Furthermore, the Bucs’ three SoCon wins are the most since the 2001 Bucs finished 4-4 in league play.

With its 27-24 win at VMI on Sept. 14, the Bucs snapped a 15-game losing streak in SoCon road games as it marked ETSU’s first road win since defeating Western Carolina 27-7 back on Sept. 28, 2002 … The Blue and Gold are now looking to win two straight SoCon road games in the same season since November of 1997 when ETSU defeated Wofford (Nov. 8) and VMI (Nov. 22) … The Bucs won their final road SoCon game at VMI to end the 2001 season and then won their first road SoCon game of 2002 at Western Carolina.

The Bucs snapped their shutout streak with a 45-0 win over Gardner-Webb last Saturday in Greene Stadium … The shutout was the first for ETSU since defeating Concord 44-0 back on Sept. 4, 2003 … The Bucs ended a 49-game streak without blanking an opponent, which spanned 5,512 days between shutouts for the Blue and Gold defense … Ironically, Billy Taylor was the Bucs’ Defensive Coordinator for both games in separate stints.

ETSU freshmen running backs Quay Holmesand Jacob Saylorsboth rushed for over 100 yards in last Saturday’s 45-0 win over Gardner-Webb … Holmes rushed for 105 yards and three touchdowns, while Saylors added 101 yards and two touchdowns en route to becoming the first Buccaneer players to accomplish the feat since Sept. 16, 2000 when Todd Wells rushed for 108 and Corey Carter totaled 107 yards in a 38-3 win over VMI … Holmes and Saylors became the first ETSU running backs to rush for over 100 yards in a game since Sept. 11, 1999 when Terrance Sims (123 yards) and Brandon Walker (110 yards) did so in a 61-0 win over West Virigina Tech … Like Holmes, Sims also rushed for three touchdowns and like Saylors, Walker totaled two rushing scores of his own.

ETSU’s defense has made it a nightmare for opponents in the backfield as the Bucs lead all FCS teams in tackles for loss per game (10.0) and total sacks (25), while ranking third in rush defense (70.5) and fourth in sacks per game (4.17) … The Bucs’ eight sacks vs. VMI are the third-most in a single game among FCS teams this season.

The Citadel has lost three of its first four games and the Bulldogs are coming off their open week … All three of the Bulldogs’ losses have come against teams who are either currently ranked or have been ranked – then-No. 10 Wofford (28-21), Chattanooga (29-28, OT), and then-No. 25 Towson (44-27) … Citadel defeated Mercer 38-31 in Macon

The Citadel is allowing 33 points and averaging 28.5 points per contest

The Bulldogs are being outscored 42-10 in the first quarter but they are outscoring opponents 38-24 in the third quarter … Overall, 69 of Citadel’s 114 points have been scored in the second half

Noah Dawkins and Aron Spann III have accounted for four of Citadel’s five interceptions – both have two this season … Willie Eubanks III leads the team with 23 tackles, while Dawkins has 21 tackles, five tackles for loss and 1.5 sacks to go with his two interceptions

Saturday marks the 27th all-time meeting between ETSU and The Citadel with the Bucs holding a 15-11 lead in the series. … The Bulldogs hold a slight 7-6 advantage in games played in Charleston … The Bucs’ longest win streak in the series is a four-game stretch, which happened twice from 1981-84 and 1993-96, while the Bulldogs won three consecutive games from 1990-92 … The Blue and Gold have won seven of the last 12 meetings, including a 56-34 win in 1994 … ETSU’s largest win in the series came in 1983 when the Bucs shutout The Citadel, 45-0, while the Bulldogs’ largest win was the 45-10 win in 2016… Jonathan Godfrey connected on a 22-yard game-winning field goal on Nov. 22, 2003, lifting the Bucs to a 16-13 victory, which at the time marked the final football game for the Bucs until they reinstated the program in 2015.

Saturday’s game will be broadcast live on ESPN3 with Kevin Fitzgerald (play-by-play), Dominique Allen (color) and Danielle Hensley (sideline) on the call.

The broadcast team of “Voice of the Bucs” Jay Sandos, color analyst and former ETSU quarterback Matt Wilhjelmand studio hosts Mike Gallagher and Trey Adams will provide ETSU fans all the information they need to complement their game-day activities.

In addition to following the Bucs on your mobile device and/or tablet with live audio and video, fans can get up-to-the-minute stats by following the action via CitadelSports.com.