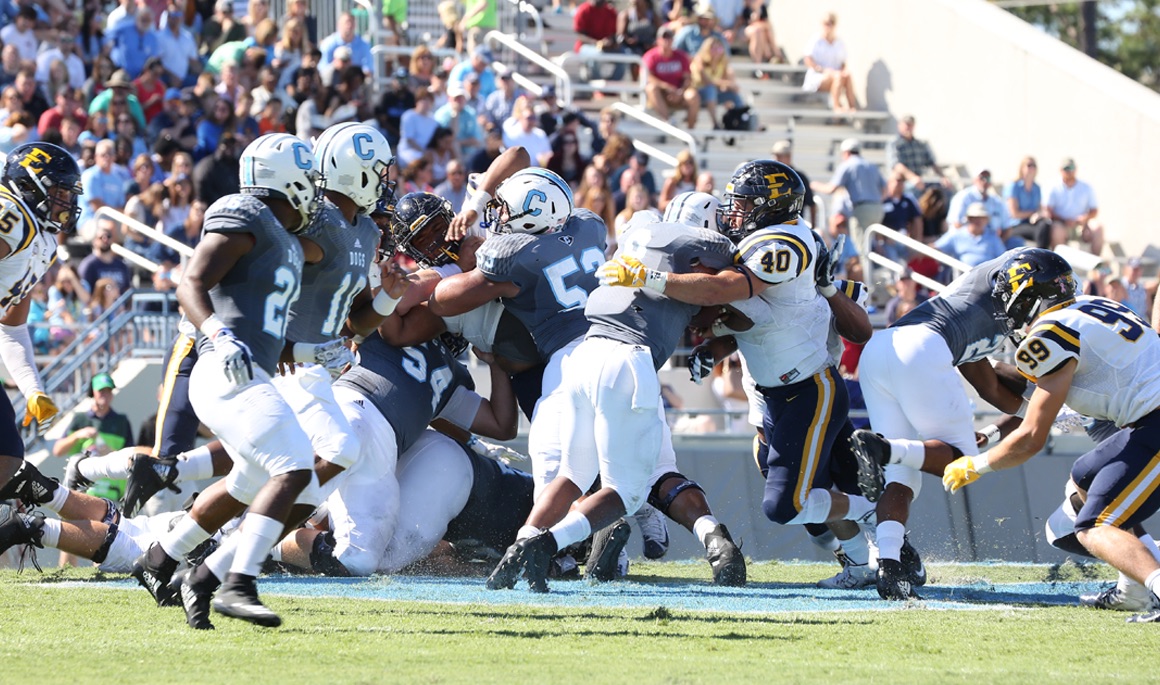 CHARLESTON, S.C. (Oct. 13, 2018) -- Who is that team all alone at the top of the Southern Conference football standings? That’s right … the No. 23-ranked ETSU Buccaneers.

Senior placekicker JJ Jerman (Seymour) set a personal best and tied the school record for field goals with four in the game – none bigger than a go-ahead, 36-yard kick with four minutes left in regulation – and sophomore safety Tyree Robinson (Gainesville, Ga.) collected a pair of interceptions – one of which was returned for a touchdown in the final minutes – to lift the Bucs to a 26-23 win over Southern Conference foe The Citadel Saturday afternoon inside Johnson Hagood Stadium.

The Bucs, who improved to 6-1 overall and are a perfect 4-0 in SoCon play, are now off to their best start since the 1996 squad opened that season 8-1 on its way to a berth in the playoffs. Along with No. 4 Wofford’s upset loss to league rival Furman, the Bucs are now in sole possession of first place in the SoCon and have won back-to-back league road games for the first time since 1997. ETSU will travel to face Wofford next Saturday at 1:30 p.m. in Spartanburg, S.C.

Meanwhile, The Citadel dropped to 1-4 overall, 1-3 in SoCon play.

Picking up the program’s 350thwin all-time did not come easy for the Bucs. In an extremely physical game and with The Citadel relying on their methodical, triple-option offense, the Bucs’ defense was left in the position of bending but not breaking. In the end, the Bulldogs collected over 200 yards rushing and nearly 400 yards of total offense. However, Robinson’s two interceptions were huge, as one stopped a potential scoring drive and the other was returned for an ETSU touchdown. In addition, the Bucs twice stopped The Citadel on fourth down (4th-and-1 plays) conversion attempts at midfield, which led to two of Jerman’s field goals.

Offensively, senior quarterback Austin Herink (Cleveland) posted a 162.5 quarterback rating on the afternoon, hitting on 15-of-20 pass attempts for 169 yards and a score. He collected those numbers despite being sacked four times and facing a relentless pass rush from The Citadel throughout the game. Senior wide receiver Kobe Kelley (Knoxville) collected a team high 80 yards receiving on the day and a touchdown.

The Bucs will now head on the road for the second of two straight Southern Conference road games, as they travel to face Wofford in a 1:30 p.m. matchup with the No. 4-ranked Terriers next Saturday, Sept. 20 in Spartanburg, S.C.