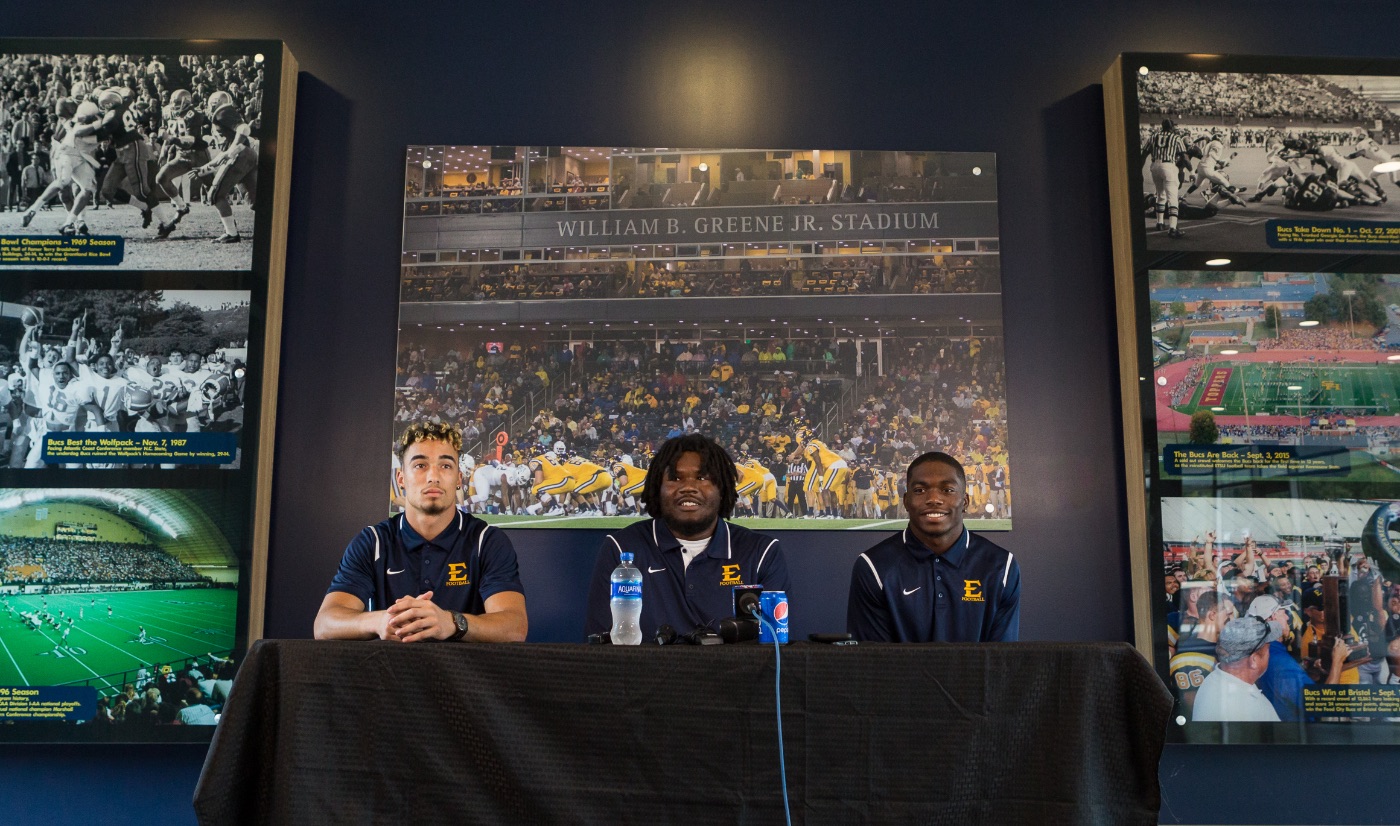 JOHNSON CITY, Tenn. (Oct. 15, 2018) -- For the second straight week, ETSU football will face an option-style attack as the Buccaneers take on No. 12 Wofford on Saturday afternoon inside Gibbs Stadium.

The Bucs faced the media on Monday to recap last week’s road win at The Citadel, while looking ahead to this weekend’s SoCon Top 25 matchup between ETSU and Wofford.

Below are comments from Coach Sanders, Ferrell, Robinson and Spagnoletti.

ON BEING WOFFORD’S HOMECOMING GAME AS MOTIVATION

Well, I hope so. Obviously I'm going to push that narrative. I don't know that it’s always the case. I remember one year at Tennessee we played Miami on Homecoming and they beat the brakes off of us. They had a pretty good football team. Regardless, that's one of those circumstances, again, we have no control over and what does it matter? Let's just go play. We're getting ready to go play a good football team, whether it's their homecoming, whether the stadium's packed, whether it's raining. We have no control over that. The only thing we can control is what we do when we kick the ball off and while the plays are going on. Let's go focus on doing our job and hopefully we'll come away from there with a win. Anytime you beat somebody on their Homecoming it's a little more satisfying. That's not something they asked us about before the season, so let's just focus on what we have to do.

ON REACHING THE TEAM GOALS

ON SECURING A WINNING SEASON

In 30 years, I've only had three seasons that weren't winning. I don't mean that egotistically or that I ever take it for granted. If I ever get to where I'm just purely satisfied with a winning season, then I'm going to get out of this business.

ON THE FIRST HALF PERFORMANCE OFFENSIVELY AT THE CITADEL

We did not play anywhere close to the way we needed to in the first half, and also I didn't do a good enough job helping those guys. The Citadel did a nice job, they had a good plan. At the same time, when we turn people loose upfront, you don't line up correctly, you drop a pass, or the quarterback's eyes are in the wrong spot, there's not a whole lot you can do to help them other than try to get them focused and get them heading in the right direction. Fortunately, we were able to do that. Coming out and having that long drive to start the second half was huge not only for the offense, but for the whole team.

No. We get 11 guaranteed opportunities to play. If you have to find motivation to play, something's wrong with you to start with. It's a game that we put ourselves ina position to make it a game. As I said after the game (at Citadel), we have to finish. We have to finish this season. That's going to be the critical part. We're off to a great start. How we finish is going to determine how this team is remembered. What is our legacy as a football team. At some point, 20 years down the road, 30 years down the road, this group of guys is going to get back together. How are they going be remembered? How are they going remember this season,20 years from now, 30 years from now? That's what I want them to think about. I tell them every day, “every day you go out there and play, you're making a memory.” Let's make a memory that we look back on fondly 20, 30 yearsfrom now, whenever that time comes that the team gets back together, let's make sure we got the right memories to look back on.

It probably helps in preparation a little bit. I'm sure if you asked some of our defensive lineman, they'd like to have a week where they don't have two and three linemen hitting them every play. The wear and tear on your body, there's no question, it's a little tougher. The challenge offensively, I think we really had three possessions last week in the second half. We were able to score on two of them, we took a knee on one of them, and technically, Tyree's interception counted as a possession, but we drove down got a touchdown, got a field goal and had to punt one time. It limits your possession. Playing the same type of team, not only helps the defense, but I think it helps the offense a little bit too– being prepared for what type of game it will be.

KEYS TO THE WOFFORD GAME

The defense is going to have to play well. I thought one of the big keys against The Citadel is we had to limit their big plays in the passing game, even though they were triple option. They've made big plays in the passing game every week. Other than the second play of the game, I thought we did that very well. They completed some passes, but they were all in front of us. We were able to make the tackle and keep making their offense execute.

That's going be a big key for our defense this week– eliminating big plays. Whether it's in the passing or the running game, we have to keep everything in front of us. Make them keep snapping the ball.

Offensively, we have only turned the ball over twice in the last four games and that's been a huge thing for us. We haven't turned the ball over and the defense has been creating some turnovers. If we can win the turnover battle andtake advantage of those turnovers… Not give them anything easy and make them earn what they get offensively, that's going tobe key.Then the kicking gameisgoing tobe big,too. I expect JJ (Jerman) to quit hitting uprightsand knock them through the uprights without trying to give us all a heart attack. We have tokickandpunt it well. We have tocover our kicks. We need to do everything well.

ON MARGIN OF VICTORY NOT PLAYING A FACTOR

I tell the players all the time, "Play the game as if the scoreboard is 0-0. We're pretty good at that – just keep playing.

Our four conference wins have been by a combined 11 points. I'll take it. I tell the quarterbacks all the time, "Be needy, not greedy." Well, I'm just going to be needy. We just need wins, need more points than the other team. Whether it's one more or 10 more or 25 more, it doesn't matter.

ON WHAT YOU HAVE TO DO TO BEAT WOFFORD

We have to finish. Last year we had a chance to beat them here, but we didn’t finish. We need to finish this year.

ON PLAYING AN OPTION TEAM FOR THE SECOND STRAIGHT WEEK

It helps to be in that mindset, be in that mood, so that the cutting and playing with our hands isn’t a surprise. We are already in that mood to play with the cuts and all that.

ON BEING WOFFORD’S HOMECOMING GAME

It's all about respect. That's how we play the game. Being somebody's homecoming opponent, it's hard, but we're going to go in there and give it everything we got.

ON BEING NAMED SOCON DEFENSIVE PLAYER OF THE WEEK

ON THE JUMP FROM FRESHMAN TO SOPHOMORE YEAR

I feel like last year I was getting my feet wet and trying to get used to the program, the system. I've been working hard to prepare myself to get ready for this season, and our coaches have been doing the same. I feel like I've grown a lot because of my teammates and my coaches. I feel like that jump has just comefrom God, honestly. It really has helped me develop into the player that you see.

ON PLAYING WOFFORD COMING OFF ITS LOSS TO FURMAN

Well, I just feel like we're the underdog anyway, so going into the game we're already looking at being doubted. We're just going in with our confidence, and if they look at us as underdogs, so be it. We have been the underdog this entire season.

ON TRUSTING THE KEYS VS. WOFFORD

We have to remember our assignments. It all comes down to eyes and alignment. We're used to playing spread teams. Our offense is spread. We just got done playing Citadel, so it comes down to assignments and being disciplined.

ON FOCUSING ON THE LITTLE THINGS

Coach (Sanders) talks a lot about focusing on the crumbs, meaning the little things. I think that's really important. Especially, when they (Wofford) came here last year, we know how that game should've ended. Unfortunately, it didn't end the way we wanted to. The last time we went to Wofford two years ago, especially on offense, we didn't play as good as we should've. I think we all have that in the back of our head on what we need to do when we get over there on Saturday.

ON THE IMPROVED RUN GAME HELPING THE PASSING GAME

It's really, really beneficial to have Quay, Jacob and all our running backs play the way they do. It really helps us on offense, and plus it sets up the path for us as receivers. Quay and Jacob are both really good backs and that's all credit to them. Our offensive line has stepped it up tremendously this year. That and just the coaches calling the right plays. It all helps out a lot.

ON WOFFORD BEING HUNGRY AFTER A LOSS

It's great to win on the road. With this being their Homecoming, it'd be really be nice to win. We all know what Furman did to them, so they're going to be really, really hungry to play us and beat us. As long as we match that mentality, I think we'll be all right.

ON HAVING A TARGET ON YOUR BACK

It's really fun. It's nice knowing going into a game that there is a target on your back, and the other team really does want to beat you because they look at you as a threat. We know it's tough. We know we play in a really tough conference, and we know that in order to win the conference, we're going to have to play really good football, especially offensively against some of these teams, like Citadel and Wofford coming up. Wofford has a really good defense that does things fundamentally sound, so it'll be tough but it's really fun.