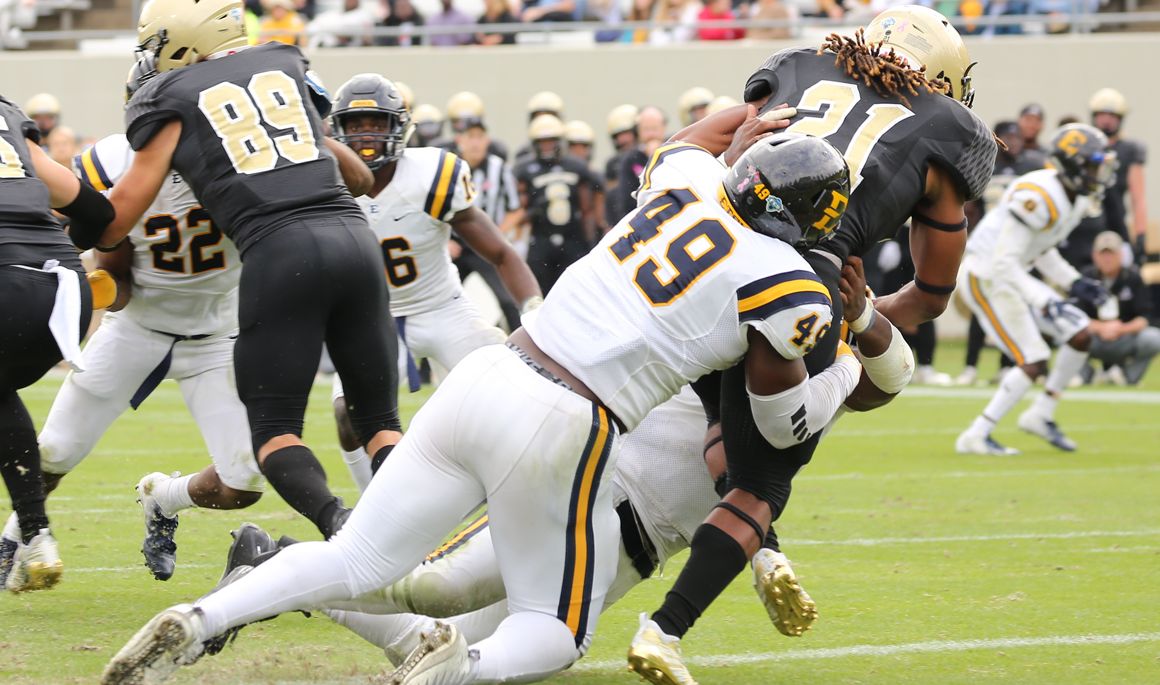 SPARTANBURG, S.C. (Oct. 20, 2018)– Rushing for a season low 39 yards and turning the ball over three times on the day, the No. 21-ranked ETSU football team was unable to defend sole possession of first place in the Southern Conference Saturday afternoon at Gibbs Stadium, falling to No. 12-ranked Wofford, 30-17.

The Bucs, who dropped to 6-2 overall, 4-1 in SoCon play, watched their five-game winning streak come to an end. Meanwhile, Wofford rebounded from a loss to Furman last week to improve to 5-2, 4-1. ETSU, which remains tied atop the league standings, will now return home to face SoCon rival Western Carolina next week at William B. Greene Jr. Stadium. Kickoff for that contest is set for 3:30 p.m.

The game got off to an inauspicious start for the Bucs, who fell behind 17-0 late in the first half. However, ETSU managed a defensive score and a field goal over the final two minutes of the half to make it 17-10 at the break and take some momentum into the halftime.

Unfortunately for the Bucs, that momentum did not carry into the second half.

Instead, an ill-timed penalty for roughing the punter gave one Wofford drive new life and resulted in a score, and later one of ETSU’s three fumbles on the day gave the Terriers a short field and ultimately another score. In the end, the Bucs trailed 30-10 midway through the fourth quarter and were unable to manufacture another rally despite a one-yard scoring run by freshman tailback Quay Holmes (Powder Springs, Ga.) that made the final 30-17 late in the contest.

Offensively, the Bucs collected 240 yards in the game compared to Wofford’s 327. Senior quarterback Austin Herink (Cleveland) was 21-of-33 through the air for 201 yards and a score, but also had two interceptions in the contest. Meanwhile, the Terriers collected 295 of their 327 yards on the ground.

Defensively, sophomore linebacker Blake Bockrath (Loveland, Ohio) and defensive back Titus Tucker (Lenoir, N.C.) both collected a game high 10 tackles to lead the Bucs. Ironically, the Bucs defense did hold the Wofford offense to their lowest offensive yardage number of the season against SoCon opponents.

The Bucs will return home for the first time in three weeks next Saturday, Oct. 27, when they host Western Carolina at 3:30 p.m. inside William B. Greene Stadium.