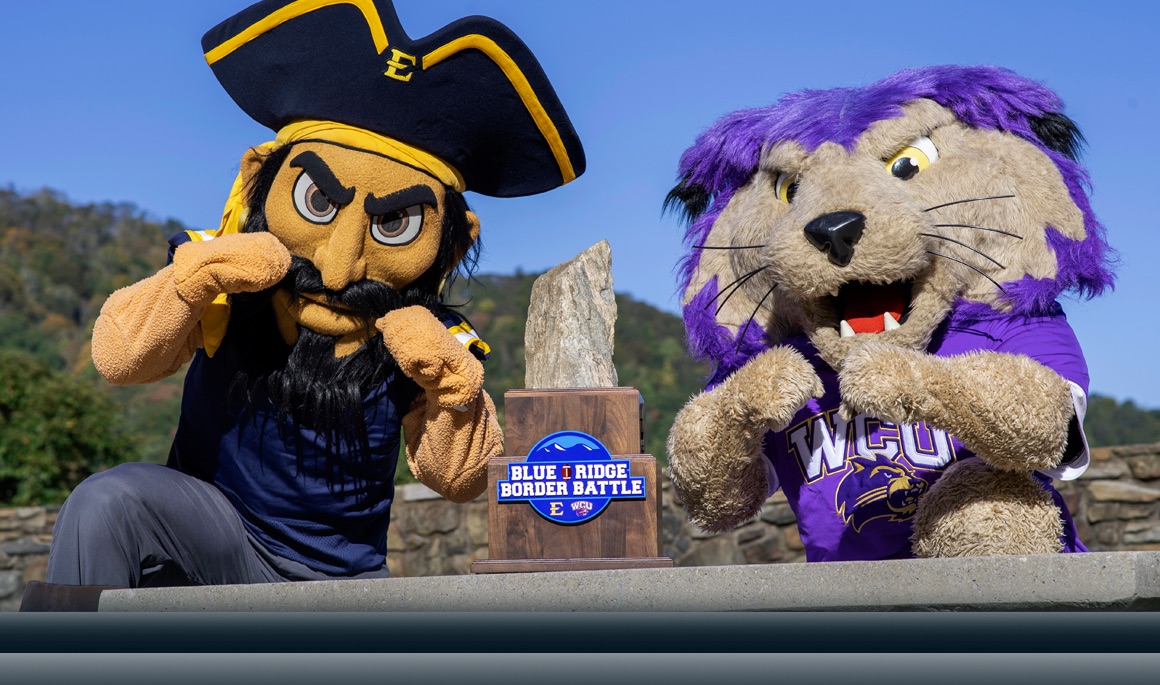 JOHNSON CITY, Tenn. (Oct. 22, 2018) –From the hills of East Tennessee to the rolling mountains of Western North Carolina, the longtime mountain border rivalry between Western Carolina University and ETSU has a new name. The rivalry between the two mountain schools will now be personified in the “Blue Ridge Border Battle” beginning this weekend as the two schools meet on the gridiron in Johnson City, Tenn.

The longtime on-field rivalry between the two schools makes sense. Both public universities come from similar beginnings and share similar missions to serve their mountain communities. The two campuses are separated by just 112 total miles and share a common border through the Blue Ridge Mountains.

This year, emblematizing the mountain-rivalry is the “Blue Ridge Border Battle” trophy that includes a two-tiered wooden pedestal adorned on opposite sides by the two school’s respective logos and the moniker of the football rivalry series. Atop the trophy is a rock that was taken from the Appalachian Trail on the North Carolina – Tennessee border in the heart of the Great Smoky and Blue Ridge mountains.

As the series progresses, the trophy will include engraved plates with the date and score of the game which will be placed under the respective logo of the winning team each season.

“We’re very excited to work with ETSU on formalizing this rivalry,” said WCU Associate Athletic Director for External Affairs, Chad Gerrety. “As the series records show, over the years this have been an extremely competitive rivalry on the field. Competing for the ‘Blue Ridge Border Battle’ trophy will only work to enhance this rivalry and be a source of pride for the teams and both strong fan bases.”

“The Blue Ridge Border Battle trophy will add to what has already been a competitive rivalry due to proximity of our Blue Ridge Mountain campuses. We are both regional, public universities with rich Southern Conference traditions. Now the winning program will have an actual trophy that came from the beautiful Blue Ridge Mountains that we both call home. I think it is something that our players, coaches and alumni will all take pride in battling for annually,” said Speir.

“An already proud rivalry built on competitiveness and geography will now be enhanced by the Blue Ridge Border Battle,” said ETSU Athletics Director, Scott Carter – one of many champions of the inception of the rivalry series. “We appreciate the collaboration with our friends in this great rivalry at Western Carolina in working together in the execution of this concept. The student-athletes, fans and alumni of both programs now have a name and a trophy to identify this great rivalry.”

Dating back to 1932 but lying dormant from 2003 until 2016, the WCU-ETSU football series was rekindled in a big way early in the 2016 season. The Catamounts and Buccaneers renewed the rivalry with a meeting at the “World’s Fastest Half-Mile” – the “Last Great Colosseum” – the Bristol Motor Speedway in one of two football games played on the infield.

ETSU overcame an 18-point, first-half deficit in front of a program-record crowd of 13,863 to win that match-up – its first league game in the program’s return to the Southern Conference. The Bucs celebrated with dual trophies including a Goodyear racing tire adorned with both teams’ logos and school colors, and a large trophy that mirrors the trophy awarded to the winner of the NASCAR race on the high-banks of the bullring short-track.

A season ago in the first meeting back in Cullowhee since the rivalry restarted, tailback Donnavan Spencer sparked the Catamounts with a career-best 139 rushing yards and a school record-tying four rushing touchdowns as No. 25/21 WCU stormed past the upset-minded Bucs, 49-10, in Cullowhee.

“We look forward to building on our rivalry with Western Carolina. This rivalry game makes a lot of sense due to the proximity of both schools and a series that dates back to 1932. Playing for this trophy will add another element to the game,” said Buccaneers’ first-year head coach Randy Sanders.

For more information on ETSU football, visit ETSUBucs.com and click the football tab.

Likewise, for additional information on Western Carolina football, visit CatamountSports.com and click on the football link.