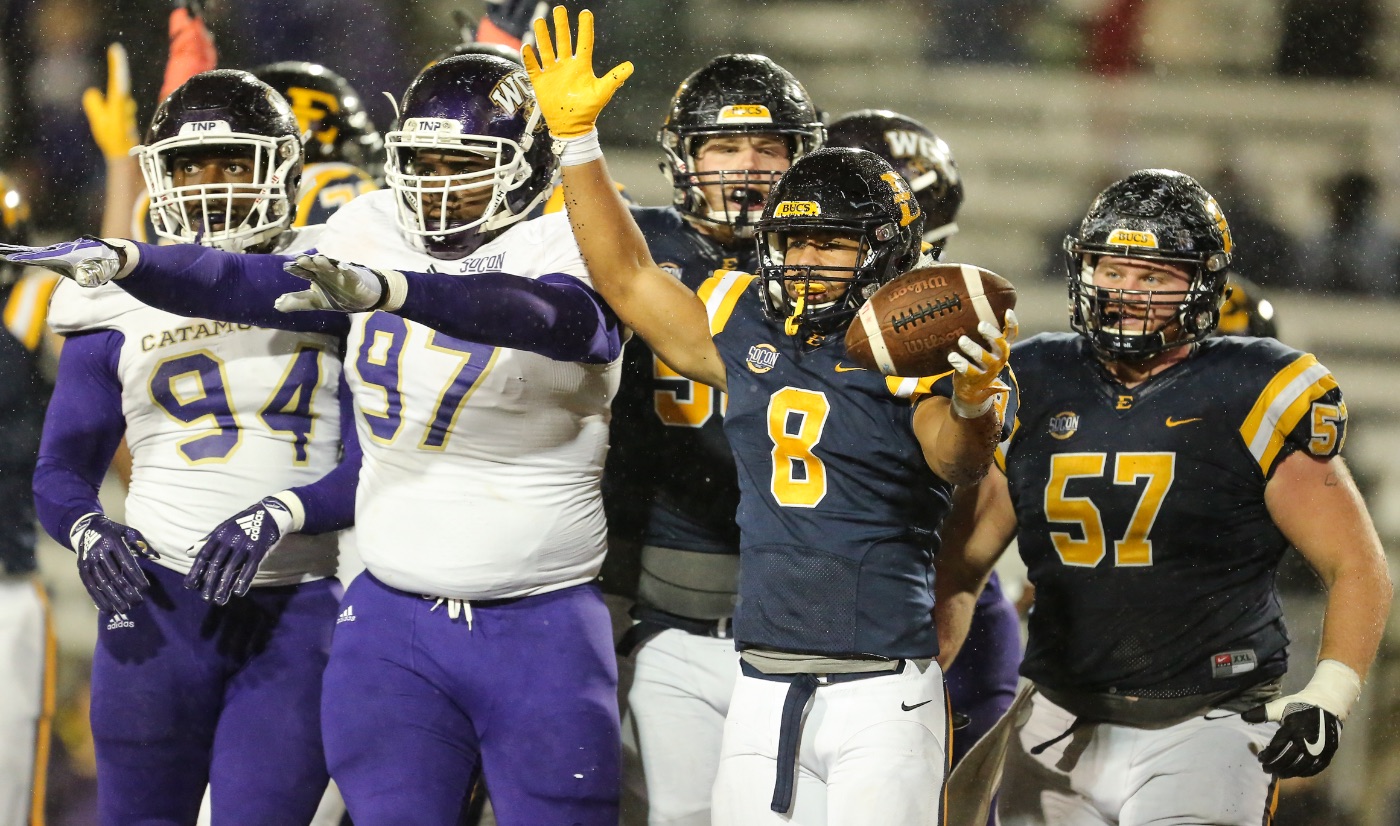 Trailing by 15 points with just over six minutes left in the fourth quarter, the No. 25-ranked ETSU football team battled back to tie Southern Conference rival Western Carolina with 10 seconds left in regulation. Then – after a missed 27-yard field goal by the Catamounts that would have ended the game in the first overtime period – the Bucs took advantage of the good fortune to ultimately win in the third overtime, 45-43, in the first edition of the Blue Ridge Border Battle Saturday evening inside William B. Greene Jr. Stadium.

The “Cardiac Bucs” – who have now won five Southern Conference games by a total of 13 points – remain tied for first place in the conference standings, improving to 5-1 in SoCon play and 7-2 overall. Meanwhile, the Catamounts dropped to 3-5, 1-5. The Bucs are off to their best start since the 1996 season and have seven wins for the first time since the 1997 season.

ETSU had led the game on and held a 12-7 advantage early in the second quarter. However, the Catamounts highly-touted offense seemed unstoppable for the next two-plus quarters of play, ultimately outscoring the Bucs 23-3 to take a 30-15 lead before ETSU collected the final 15 points of the contest to tie it in the final seconds.

In a game where both team’s combined for 1,043 yards of total offense – season-high 541 for the Bucs and 502 for the Catamounts – redshirt senior Austin Herink (Cleveland) continued to write new chapters in the storybook tale of his final season in Johnson City. Going 28-of-46 through the air for 294 yards and rushing for another 45 yards, Herink threw for a score and rushed for another, while also collecting the game-tying two-point conversion in regulation and the game-winning two-point play in the third overtime.

Some of the game’s most defining plays came courtesy of ETSU’s freshmen class. Freshman tailback Jacob Saylors (Jasper) finished with a team high 123 yards rushing on the night, including two touchdowns – one of which was a 16-yard rumble that was the final overtime score. Meanwhile, freshman tight end Nate Adkins (Knoxville) capped the game-tying scoring drive in regulation, snaring a one-yard pass from Herink with just 10 seconds left on the clock. In addition, freshman tailback Quay Holmes (Powder Springs, Ga.) collected 79 yards on the ground with one rushing touchdown, while senior wide receiver Kobe Kelley (Knoxville) had a team high 84 yards receiving on the night.

Defensively, the Bucs were led by Blake Bockrath (Loveland, Ohio), who picked up a career-high 13 tackles on the night.

The Bucs will be back on the road in Southern Conference play next week, traveling to Macon, Ga., to face Mercer at 3 p.m.