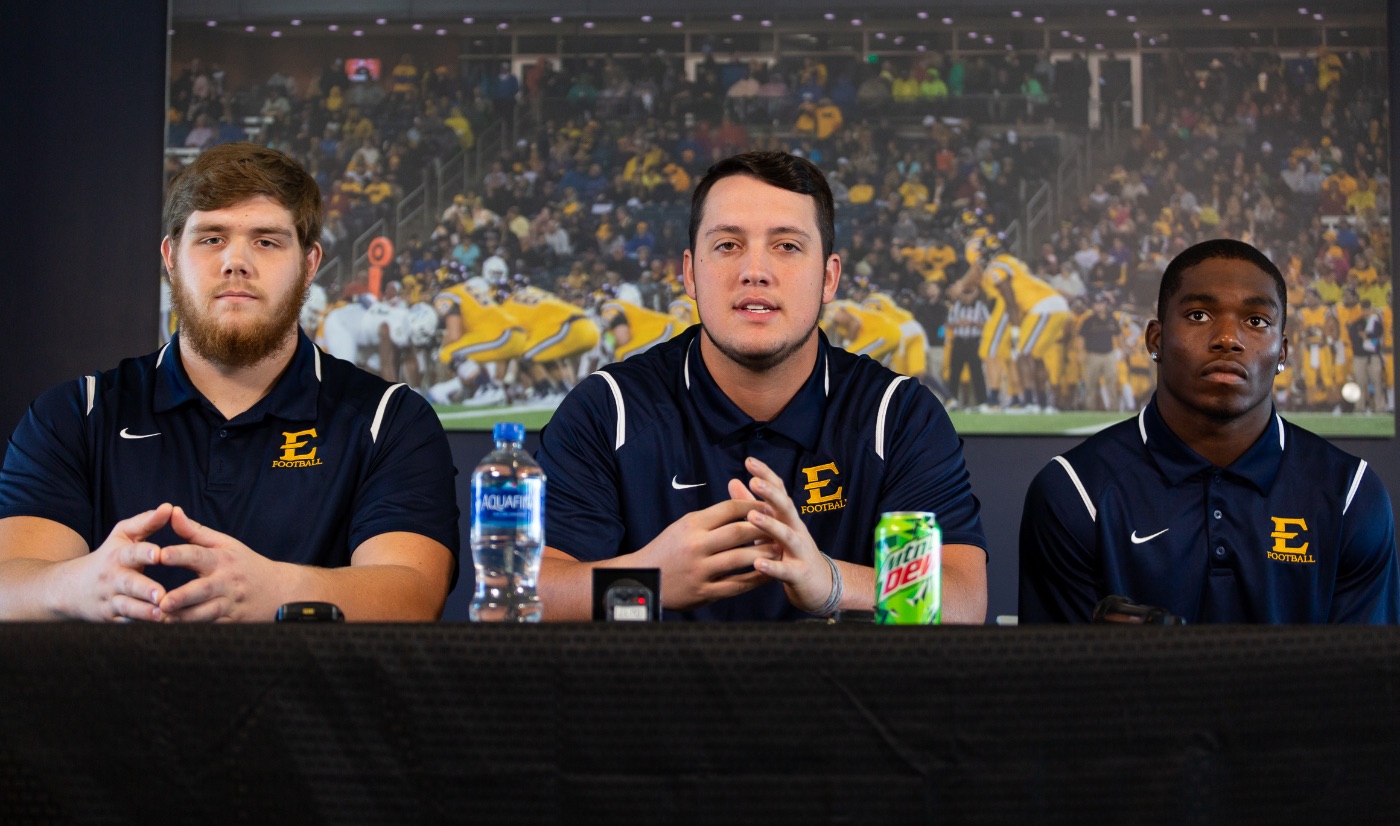 JOHNSON CITY, Tenn. (Oct. 29, 2018) -- The ETSU football team met the media on Monday to recap last week’s win over Western Carolina and to preview this Saturday’s road game at Mercer.

Below are comments from Coach Sanders, Robinson, McCloud and Parker.

We win game 10, that's our encore. We talked about you don't let game eight affect your game nine. We didn't want the Wofford loss to make us lose another one, so we tried to put that one to bed when we came back to work on Sunday. I know I keep saying the same things, but when the reasons for winning change, I'll change. But at this point, it’s one game at a time, one day at a time. Let's focus on what we have to do today to get better as a football team. Focus on what we have to do to go win game 10.

Offensively, they have a number of weapons. The quarterback is playing very well. They have some receivers that make a lot of plays and they can change the game. The running backs are playing well, and then defensively, they do a nice job. They're playing well as a team right now. They made a change at quarterback after the first game. They had one get hurt. Then they had to go back, and they've done a good job responding. They could easily have a much better record than what they have. It's going to be a big challenge for us on the road. I'm sure they're probably still a little upset about the way the game ended here last year. I'm sure they'll have a pretty spirited week of practice getting ready for us, but I expect us to have a pretty spirited week as well.

ON THE GOALS SET AT THE BEGINNING OF THE YEAR

We set some (goals) that are pretty high. I think we set some that we felt were pretty attainable. If they're goals, you don't want them to be easy. You need to have something out there, you have to dangle the carrot out there that you want to accomplish, you want to achieve. None of them are easy to accomplish, and we still haven't accomplished our goals, yet. They're all still very attainable. We have to go finish this season this right. We have to go do it. We wanted to set goals that made us work and challenge us, but yet were attainable.

ON THE CLOSE GAMES

We've made a living out of winning close ones – no question about that. I guess we've had two games that weren't exciting right until the end. One of them I was about ready to leave a little bit before it was over, and the other one I wish we could have stayed and played a while longer because it was fun. Whether it's a one-point win or a 40-point win, it doesn't matter. Wins are wins, losses are losses, and it would be nice to be able to relax a little bit. For the most part, I sleep pretty well after the games, because I'm usually tired when they're over.

ON THE PLAY OF AUSTIN HERINK

Austin shows a lot of a lot of grit, integrity and a lot of character in the way he plays. It's far from perfect – it's far from what I want out of my quarterback. But at the same time, he keeps playing. He keeps competing. He keeps battling.

He's tough. He's physically tough. He's proven to be pretty mentally tough. The thing he did when he came in there was he did a great job taking care of the football. We didn't turn the thing over. The last couple of games we turned it over too much. We have to fix that because you're not going to beat a good team on the road… Or you're not going to beat a team like Samford when they come in here. We have do a much better job taking care of the football. Get back to why we were winning games.

If we win the turnover ratio, the field position game and the penalty game; usually it gives you a good chance to win the football game.

ON AUSTIN ELEVATING HIS GAME LATE

He does elevate his game late. I want the game elevated when we start. If we do that, we won’t get into those late-game situations. That's kind of the situation I think where we are at as an entire team. We need to learn to play every play like it's the most important play of the game.

The first play of the game or when there's two minutes left and it's 4th-and-10 – they're both just as important. If you do it with the same intensity, the same sense of urgency on the first play of the game, a lot of times you don't get in those situations late. That's where we have to grow as a football team – understand how every play is important. You don't wait till you have to elevate your game. Now, fortunately we've been able to do that for the most part. This year with only a couple of exceptions, we have been able to elevate our game. But when I get this program to where I want it to be, we'll start the game elevated and there's no change as you go along.

ON PLAYING THE ENTIRE 60 MINUTES

I'm trying to get them to understand, you just keep playing. You never know what's going to happen. The first challenge of a coach is to get your guys to play hard. If your guys aren't playing hard for you, as a coach, you have a problem. That's one thing our guys are doing, they play hard. They're competing. They're battling. We're still understanding how to win. We're understanding what it takes, and I think they're starting to understand that you play the game for 60 minutes. You can't win it in the first quarter, but sometimes, you might be able to lose it. If you get off to a good start, great. If you get off to a bad start, ok. Just keep playing. It's 60 minutes, and they keep score for all 60 minutes, and sometimes they keep it even after you finish the 60 minutes as we found out the other night. So, you just keep playing until they tell you to go to the locker room.

ON PLAYING MEANINGFUL GAMES THIS LATE INTO THE SEASON

ON WHAT THE FOOTBALL PROGRAM CAN DO FOR THE UNIVERSITY

Athletics does a lot of things for the university. I think one of the most important things they can do is the good publicity, represent the university well and to get the brand out there. The more the brand is out there, the more it can help get more people applying to school. At the very least it gets them to come see what our city and university is all about. Once they do that, this place sells itself because we have great academic programs, great administration and a great city to live in.

They are going to bring a lot of intensity. We have to come prepared. We need to be ready to play because they are a good football team.

It’s the, “so what, now what” mentality that coach has implemented here. Play the next play, whatever happens, happens. That's what Coach Sanders is saying. If they (the opponent) score, we have to come out and score. If they (the opponent) have a turnover, we need to capitalize on that turnover. We have to play the next play and not focus on the past.

I came in as a true freshman the first year we had started the program in 2015. I came in and started that season and got off to a pretty good start. Then, I came in as a starter the second year and suffered a knee injury the first game. I missed the rest of that season and last season as well. By the grace of God I got to come back. Thanks to our athletic trainers like Nathan Barger preparing me, I was able to come back and play again. I've just been blessed to be able to come back, be part of the team and be able to play some games this year.

ON TWO YEARS NOT PLAYING

It was tough being out there on the sideline. You're not even practicing. I'm over there working out while everyone else in practicing. I didn't even feel like I was part of the team. That was difficult, but I got to come back and it's awesome.

ON STAYING POSITIVE DURING HIS REHAB

It was pretty difficult, but I had to keep my mind right the entire time. I was going to rehab early in the morning every day to try and get right for just that hope and chance that I might get to play again. Like I said, by the grace of God, He brought me back. I got to fulfill my dream.

We've had some plays we've blocked pretty well, but when it came down to it, we did what we had to do. When we needed to do it. Our number was called. We made it work.

ON THIS WEEK’S GAME VS. MERCER

ON THE TEAM ALWAYS FIGHTING UNTIL THE END

It's like Coach Sanders says, "Always play like the score is zero to zero, every play from the first one to the last one can make a difference in the game.” It does show some more leadership now that we have some experience with some of us been playing for four and five years now. We've shown some signs of maturity since our first two seasons where we got down early, we kind of quit and we've grown from that. Obviously, we've shown we don't have any quit in us anymore.

ON PLAYING MERCER THIS WEEKEND

ON THE TEAM’S SUCCESS

There's a group of guys on the 25 (yard line), we always pray before games, and something that our chaplain said at one of our away games… He said, "Don't play for yourself. Don't even play for the team. Play for God. Play to give glory to God." This is something that I have prayed on the sideline with that group of guys, just saying, "Lord, keep us safe, and above all, let us just play for You. It's not about us. It's for Your glory. You're the reason we're here. You're the reason we have the ability to play this amazing game." It's our faithfulness to Him, and just continuing to put in the hard work as well, on top of that. So if you just take those two amazing things, it creates an unstoppable force.

Something our position coach (Matt McCutchan) says is, "Don't let one bad play affect the next five." So for me, if I were to give up a sack, I can't let the next five plays be a sack. So you need to have a short-term memory, and just continue to fight no matter how much we're down, or how bad you're playing. You just have to continue to fight and make sure that the next play isn't affected by that previous play.