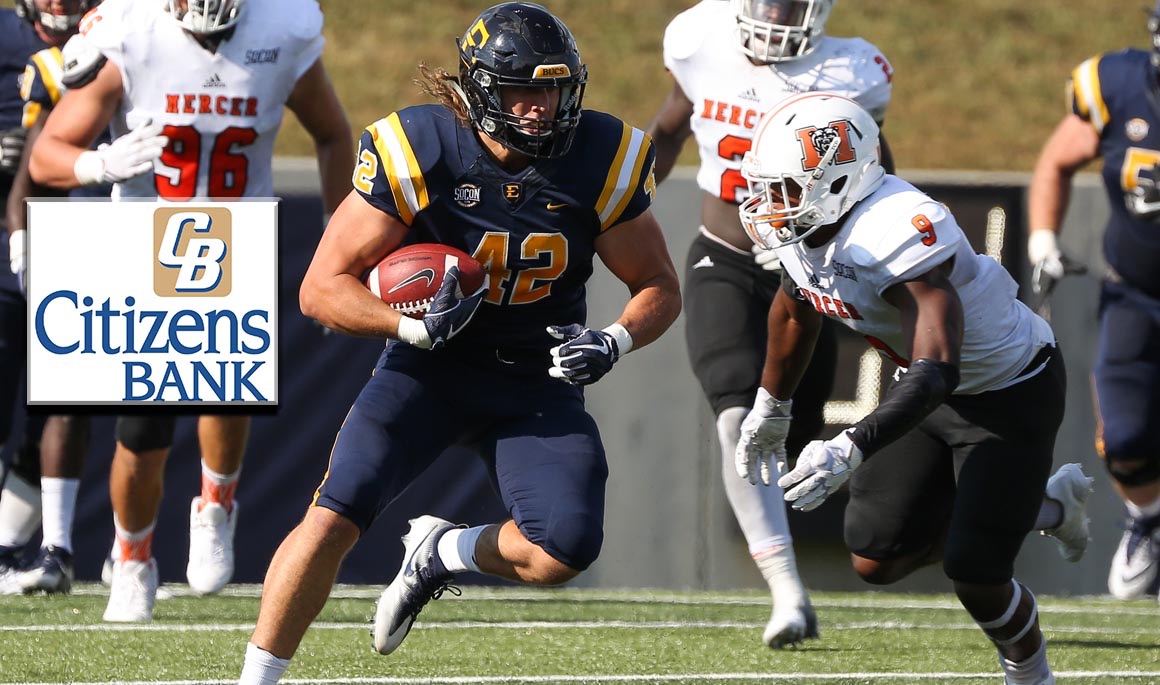 Top Five Things to Know for ETSU at Mercer

MACON, Ga. (Nov. 1, 2018) – Coming off its thrilling triple-overtime win over Western Carolina, the ETSU football hits the road this weekend as the No. 22 Buccaneers take on Mercer Saturday afternoon at Five Star Stadium. Kickoff is set for 3 p.m.

No. 1 – Kickoff Time: The Bucs and Bears will kickoff at 3 p.m. Saturday afternoon inside Five Star Stadium.

No. 3 – Series History: This marks the fourth straight season ETSU and Mercer are meeting on the gridiron with the Bears winning two of the previous three matchups … However, the Bucs won the last meeting as ETSU defeated Mercer 26-23 in overtime last September in Greene Stadium … The Bucs trailed by 10 points entering the fourth quarter before mounting their comeback thanks to a 49-yard field goal by JJ Jerman and a one-yard touchdown run from Blake Rodgers with 4:35 remaining in regulation … In overtime, Mercer took the ball first and went ahead on a 29-yard field goal by Cole Fisher, while the Bucs needed just one play on their first possession to win the game as Austin Herink hit Jajuan Stinson on a 25-yard pass play to end the ballgame … Last year’s contest was a game of runs as ETSU jumped out to a 10-0 lead, before Mercer scored 20 unanswered and ETSU scored 16 of the final 19 points … Herink was 26-of-33 for 284 yards and one touchdown, while adding 34 rushing yards and one score … Defensively, Kaman Cooper added a team-high eight tackles, while Dylan Weigel had a 50-yard fumble return, which led to Herink’s 3-yard touchdown run … ETSU held the ball for nearly 36 minutes of the game and did not turn the ball over ... The defense held Mercer to 2-of-10 on third down and forced one takeaway … The Bears have won both meetings in Macon as they defeated the Blue and Gold 52-0 in 2015 and 21-13 in 2016 … Dylan Weigel has 24 career tackles and three fumble recoveries all-time against Mercer, while Austin Gatewood has totaled 21 tackles (two tackles for loss) in three outings against the Bears … In three career games vs. Mercer, Austin Herink is completing 67% of his passes (57-for-85) with two passing touchdowns (one rushing) and 601 yards passing (one interception).

No. 4 – Inside the Numbers: The Bucs’ five SoCon victories have been decided by 13 total points with ETSU’s largest margin of victory in those games being three points – vs. VMI, Chattanooga and Citadel … ETSU is 4-0 this season when scoring first … The Bucs are 5-0 in games decided by three points or less and 6-0 when hold opponents to less than 30 points … When ETSU outrushes the opposition, the Bucs are 4-0, while also going 4-0 when winning the time of possession and turnover battle … The Blue and Gold are 4-0 when leading after three quarters, while also picking up three wins when trailing at halftime and trailing after three quarters – ETSU trailed at the half and after three quarters vs. VMI, Furman and Western Carolina.

Tickets for Saturday’s game can be purchased by calling the Mercer ticket office at (478) 301-5470 or purchase tickets online by clicking here.