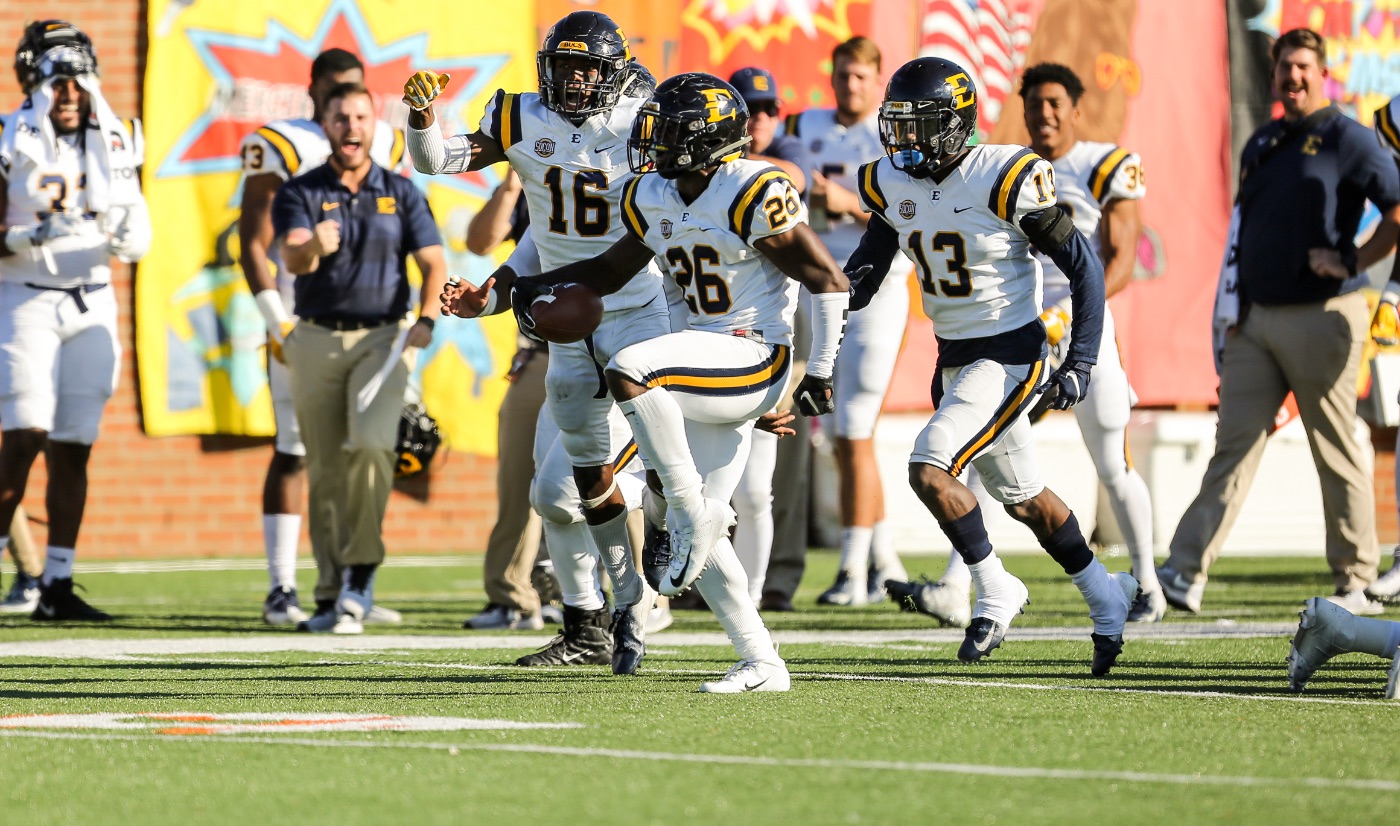 Bucs to play for outright league championship Nov. 17 against Samford at Greene Stadium

The No. 22 ETSU football team clinched a share of the Southern Conference championship following its 21-18 win at Mercer on Saturday night in front of 10,002 fans at Five Star Stadium.

The Bucs, who have now won six conference games by a combined 16 points, improved to 8-2 overall, 6-1 in SoCon play. The eight wins this season mark the third-most victories in program history. The conference championship is the first SoCon title for the Blue and Gold, and ETSU will play for the outright crown and automatic bid to the FCS Playoffs on Saturday, Nov. 17 when they host Samford at 1 p.m. inside Greene Stadium.

The Bucs moved into sole possession of first-place in the SoCon standings thanks in part to Samford defeating No. 9 Wofford, 35-20. Both teams sit one-game back of the Bucs with Samford playing at The Citadel and Wofford traveling to Western Carolina next Saturday. ETSU will be on its bye week.

Redshirt junior defensive back Artevius Smith (Birmingham, Ala.) played a significant role in the Bucs’ victory as he came off the bench to record two key interceptions, marking the first two of his collegiate career. Smith, who replaced starting defensive back Titus Tucker (Lenoir, N.C.) after he was ejected from the game in the first half following a controversial penalty for targeting, gave the Bucs great field position following both takeaways. The Buccaneer offensive orchestrated scoring drives on both interceptions as redshirt freshman running back Quay Holmes (Powder Springs, Ga.) scored on touchdown runs to cap off the scoring drives.

Overall, Holmes registered his fourth 100-yard rushing game of the season as he totaled 114 yards and two rushing touchdowns, while also added four receptions for 17 yards and one score. Holmes moved his rushing touchdown total to 12 on the season and he has now accounted for 14 of ETSU’s 27 offensive scores on the year. Redshirt senior quarterback Austin Herink(Cleveland, Tenn.) finished 19-of-25 for 161 yards, one touchdown and one fumble. Following his six-yard touchdown pass to Holmes in the second quarter, Herink moved into a tie for sixth-place all-time in program history with 32. Of his 19 completions, 10 were hauled in by redshirt sophomore wide receiver Braxton Richburg (Hoschton, Ga.) as he finished with career highs in receptions and receiving yards (89). Richburg became the first Buccaneer wide receiver to finish with double-digit receptions since Cecil Moore totaled 12 in a win over Chattanooga on Nov. 11, 2000.

Defensively, linebackers Dylan Weigel (Pickerington, Ohio) and Jared Folks (Harrisburg, Pa.)led the team with 10 tackles each, while junior defensive back Jeremy Lewis(Lawrenceville, Ga. )added seven tackles and three pass break ups. Weigel became the third ETSU player in school history to register over 400 career tackles as he moved his total to 406 en route to joining Mario Hankerson (452) and Shannon Depew (425) as the only players to accomplish the feat.

As a unit, ETSU totaled 330 yards of total offense (179 rushing/161 passing), while Mercer was held 100 yards below its season average as they finished with 310 yards (186 passing/124 rushing). The Bears’ 18 points was their second-lowest total of the season (14 at Memphis) — 16 points below their season average.

Mercer, whose Homecoming game was Saturday, moved to 4-5, overall, 3-3 in conference play.

In a series that just dates back to 2015, the Bucs have won the last two meetings to even the series at 2-2 … Saturday marked ETSU’s first win over the Bears in Macon.

ETSU has forced at least one turnover in 18 of its last 25 games and in 28 of its last 38 contests ... The Bucs have registered 15 games with at least two turnovers since restarting the program in 2015 – ETSU is 11-4 in those contests

The Bucs’ eight wins and six SoCon wins are the most by a Buccaneer team since 1996 ... The eight wins are also the third-most in program history with the 1996 and 1969 teams finishing with 10 victories

Randy Sanders became the first ETSU head coach to win eight games in the first season at the helm, as he passed Paul Hamilton’s mark of seven wins which was set in 1997

Following Quay Holmes’ 100-plus yard rushing game, ETSU improved to 9-1 when having a player rush for over 100 yards … Holmes’ 12 rushing touchdowns this season are the fourth-most by a Buccaneer as Brandon Walker had 13 in 1996 and 1999, while George Searcy holds the single-season record with 17 in 1989

The Bucs will enjoy an off week next Saturday before returning home to Greene Stadium for the regular season finale against SoCon foe Samford at 1 p.m.