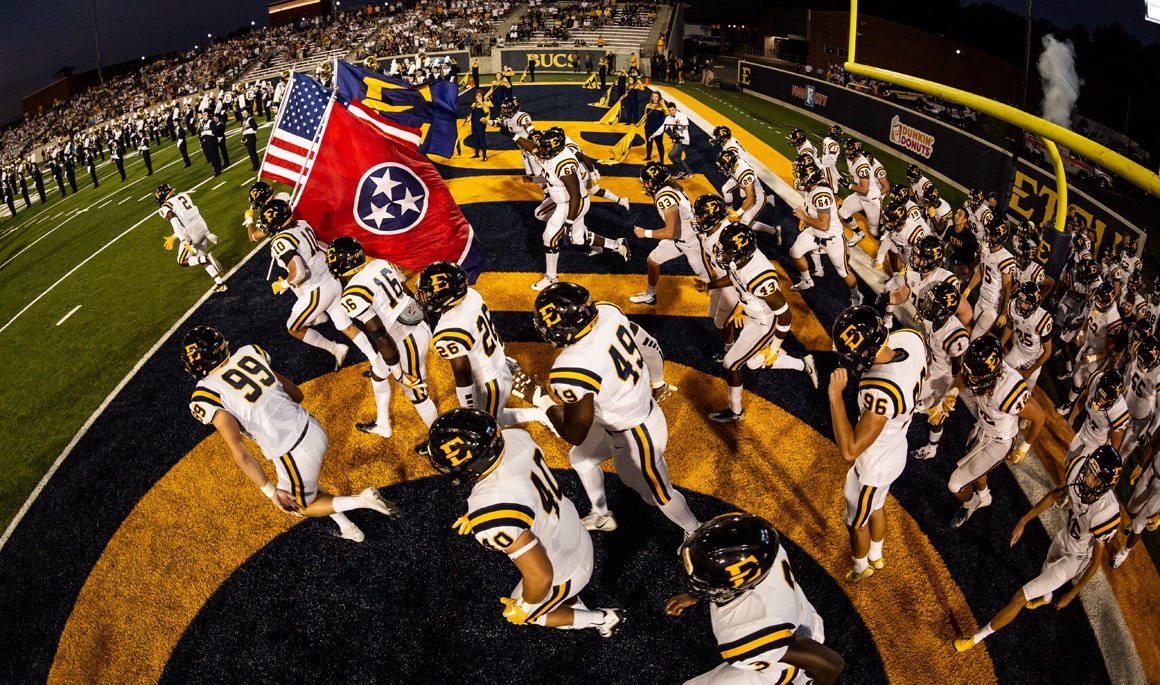 As fans make their plans for the game, the ETSU Department of Intercollegiate Athletics has released its “Things to Know” presented by Citizens Bank.

No. 1 – OUTRIGHT SOCON FOOTBALL TITLE GAME THIS SATURDAY AT HOME: In what is arguably the most significant football game to be played on the ETSU campus in school history, the Buccaneers will host Samford this Saturday at 1 p.m. inside Greene Stadium for an opportunity to capture the outright Southern Conference football championship and secure the league’s automatic bid to the Football Championship Subdivision national playoffs. The Bucs, who are 8-2 overall and 6-1 in SoCon play, have already won a share of the program’s first-ever SoCon title, but can take sole possession of the championship with a victory. Food City is Saturday’s presenting game sponsor.

No. 2 – Ticket information: Only a few hundred tickets remaining for this weekend’s game … To purchase tickets, call 423-439-3878 or click here.

No. 3 – Heroes' Day: The ETSU Department of Intercollegiate Athletics will host Heroes’ Day at this Saturday’s football game with Samford. Veterans, active military, police and first responders with a valid ID will receive a free ticket and be recognized during the game. The first 50 Heroes who enter the gates on Saturday will also receive a voucher for a free turkey courtesy of Food City.

No. 4 – Weather Forecast: Saturday’s weather forecast is the best the Tri-Cities has had all week with it scheduled be 60 degrees and sunny.

No. 6 – Student ticket information: Student tickets will be released online the Saturday prior to each home game. Students can also pick up tickets in person by visiting the Student Organization Resource Center (SORC), which is now located inside the second floor of the CPA, from Sunday through Thursday at noon on game week. Standard hours for the services desk are Monday-Friday, 9 a.m.-6 p.m.; Saturday, 10 a.m.-2 p.m.; and Sunday, 2-5 p.m. More student ticket information is available by clicking here and scrolling to the bottom of the page on the Game Day Central page. Students can order their tickets on-line by clicking here.

No. 7 – Clear Bag Policy and Enhanced Security: ETSU has a clear bag policy for all home football games inside William B. Greene, Jr. Stadium. In addition, new security procedures including metal detectors and security wands will be employed at entry gates. Fans are asked to arrive early to insure access to the stadium. Prohibited items inside the stadium will include the following:

No. 8 – Mobility Assistance Shuttle Service: Located at the Alumni Pavilion area on the west side of the ETSU parking garage and convenient to Lots 21 and 22, the Mobility Assistance Shuttle Service will consist of golf carts that will provide rides to the stadium for disabled fans and those with mobility issues. The carts will begin service one hour prior to kickoff and take fans from the Alumni Pavilion to the Bank of Tennessee East Arch roundabout. The carts will also provide service from the roundabout back to the Alumni Pavilion area at the conclusion of the game. Signs designating the pickup area prior to games will be visible on game days. The ETSU Department of Intercollegiate Athletics asks that only fans in physical need of this service utilize the shuttles.

No. 9 – Food City Zone: The Food City Zone will open three hours prior to kickoff for all home games, with inflatables for children and other fun-filled pregame activities. The Food City Fan Zone is located between Lots 21 and 22 near the main roundabout entering campus from State of Franklin Road.

No. 10 – Public Parking – Parking for the general public will be available in the parking garage and in Lot 22 (located behind Bojangles on Go Bucs Trail). Parking is $10 per car. Click the link below for the parking map. Students are reminded they can still access normal student parking by displaying their parking pass and ID.

Saturday is Senior Day at Greene Stadium as 33 players will be recognized prior to the game in a special pregame ceremony ... Of the 32 players, 11 players are part of the Bucs’ first 2014-15 class ... Those 11 players include: Cory Colder, Dylan Dockery, Alonzo Francois, Austin Gatewood, Asley Haynes, Austin Herink, Keanu James, Adam Mullins, Matt Pyke, Michael Scates and Dylan Weigel.

For the sixth straight week, ETSU was ranked in both the Coaches and STATS FCS Top 25 Polls … The Bucs cracked both polls for the first time since the program returned in 2015 back on Oct. 8, marking the first time ETSU was last ranked since Oct. 30, 1999, when the Bucs were No. 18 … The Bucs were ranked No. 23 in the STATS FCS Poll and No. 24 in the Coaches Poll on Oct. 8 ... ETSU is now ranked No. 17 in the coaches poll and No. 19 in the media poll ...  The Bucs are one of two teams in the SoCon who are ranked (No.  14/13 Wofford), while Chattanooga, Furman and Samford are all receiving votes.

ETSU has won all five home games this season while outscoring opponents 164-91 inside Greene Stadium in 2018 … The Bucs’ five home wins match the most since posting five in 1999 – the school record for home wins is six, which was done in 1996 and 1962 … ETSU is averaging 431.0 yards per game (251.0 passing/180.0 rushing) at home this season, while holding opponents to 317.6 yards per contest (212.2 passing/105.4 rushing) … The Bucs’ defense has forced eight turnovers (six fumbles/two interceptions) and turned those takeaways into 31 points, whereas, ETSU’s offense has turned the ball over eight times at home, but opponents have only turned those miscues into seven points … The Buccaneer defense has registered 18 sacks (-129 yards) at home, along with totaling 48 tackles for loss (-208 yards) … As a team, ETSU has scored 20 touchdowns in five games at Greene Stadium, while the opposition has scored 12 touchdowns.

BUCS ONE OF 22 FCS TEAMS UNBEATEN AT HOME

Sitting at 5-0 at Greene Stadium, ETSU is one of 22 FCS teams that are unbeaten at home this season … Of the 22 teams, the Bucs are one of 11 who are undefeated at home and have won at least eight overall games this season.

MORE ON THE CLOSE ENCOUNTERS

Overall, the Blue and Gold have scored 165 points (27.5 per game) and have given up 145 points (24.8) in these contests … Along with the points being nearly identical in these games, the Bucs are only being outgained by 1.5 yards in the six games – 348.5 to 347.0, while both teams have scored 18 touchdowns during this stretch (ETSU outscoring opponents 38-21 in points off turnovers) … The Bucs’ defense has generated 46 tackles for loss (-186 yards) and 18 sacks (-131 yards), while limiting the opposition to 20 first-quarter points … As a team, ETSU is 26-of-28 in red zone scoring with 15 touchdowns coming in those trips, while opponents are 22-of-24 with 14 touchdowns coming in the red zone.

The Bucs’ five SoCon victories have been decided by 16 total points with ETSU’s largest margin of victory in those games being three points – vs. VMI, Chattanooga, Citadel and Mercer … ETSU is 4-0 this season when scoring first … The Bucs are 6-0 in games decided by three points or less and 7-0 when hold opponents to less than 30 points … When ETSU outrushes the opposition, the Bucs are 5-0, while also going 5-0 when winning the time of possession and turnover battle … The Blue and Gold are 5-0 when leading after three quarters, while also picking up three wins when trailing at halftime and trailing after three quarters – ETSU trailed at the half and after three quarters vs. VMI, Furman and Western Carolina.

Redshirt freshman running back Quay Holmes has been a touchdown scoring machine as his 14 total touchdowns ranks fourth among FCS players and his 12 rushing scores ranks sixth … Holmes has accounted for over 50 percent (52 percent) of the Bucs’ 27 offensive touchdowns this season as he ranks 20th among FCS players in scoring per game (8.4) … Holmes leads the team in scoring with 84 points and he’s looking to become the first offensive player to lead the Bucs in scoring for a season since the program returned in 2015 – kicker JJ Jerman has led the team in scoring from 2015-17 … Holmes’ 84 points are tied for third-most in single-season history, while he’s four points shy of passing Hal Morrison for second-most by a Buccaneer … Holmes’ 84 points are the most by a Buccaneer since Brandon Walker ended the 1999 season with 84 points … Holmes’ 14 total touchdowns are tied for the second-most in program history, while he’s four shy of tying George Searcy’s record of 18, set in 1989.

Randy Sanders picked up his eighth victory of the season after the Bucs defeated Mercer on Nov. 3 in Macon … With that win, Sanders set the program record for victories by an ETSU head coach in his first season … The previous record of seven was set by Paul Hamilton in 1997.

Samford had its four-game win streak snapped following a 42-27 loss at The Citadel on Saturday … The Bulldogs, who were receiving votes in both major Top-25 polls last week, moved to 5-5 overall, 4-3 in SoCon play

Samford has gone to the FCS Playoffs in each of the last two seasons, while it is looking to post its eighth consecutive winning season

The Bulldogs went 4-1 at home this season, while dropping four of their five road games this season … Of their five losses, three have been decided by 10 points or less, including two conference losses by one possession – 30-24 vs. Mercer and 27-20 at Chattanooga … Samford also dropped a 36-26 decision at Florida State

Samford is outscoring its opponents by 80 points in the first quarter, 130-50

In their wins, the Bulldogs are averaging 55.6 points per game, which includes 66-point efforts vs. Shorter and Western Carolina and a 73-point effort vs. VMI … In their losses, Samford is averaging 21.4 points per game … Overall, Samford has not been shutout in 200 consecutive games with its last shutout coming on Nov. 9, 2000 when they lost 29-0 at Tennessee

Senior linebacker Aaron Harris leads the team with 85 tackles, while Ahmad Gooden has totaled 47 tackles, 15 tackles for loss, 5.5 sacks, 10 hurries and two fumble recoveries … Freshman defensive lineman Nelson Jordan is second on the team in TFLs (7) and sacks (4) … Freshman defensive back Jordan Montgomery and Nick Barton both lead the team with two interceptions, while senior defensive back Darius Harvey has forced two fumbles with two recoveries

Saturday marks the sixth all-time meeting with Samford winning four of the first five, including a 42-7 win last year in Birmingham … The Bucs’ lone win in the series was a 15-14 victory to end the 2016 season when JJ Jerman connected on a walk-off 28-yard field to knock of the 18th-ranked Bulldogs … At the time, that was the first win over a ranked team since Oct. 27, 2001 when the Bucs defeated No. 1 Georgia Southern … The first-ever meeting in the series was in 1989 when Samford defeated ETSU 38-23 in Birmingham, while the teams also played in 1990 and 1991 in Johnson City … The most points ETSU has scored in the series came in that first meeting, while Samford’s 42 points scored last year marked the most by the Bulldogs in the series.

Saturday’s game will be streamed live on ESPN3 … David Jackson will handle the play-by-play duties, while former ETSU quarterback and Hall of Fame member Mark Hutsell will be the color analyst and Kasey Marler will handle sideline reporting.

At halftime, the crew will have the Zaxby’s Halftime Show, while fans can tune into the General Shale Post Game Show for a full wrap up with game statistics, players and coach interviews and other post-game information.