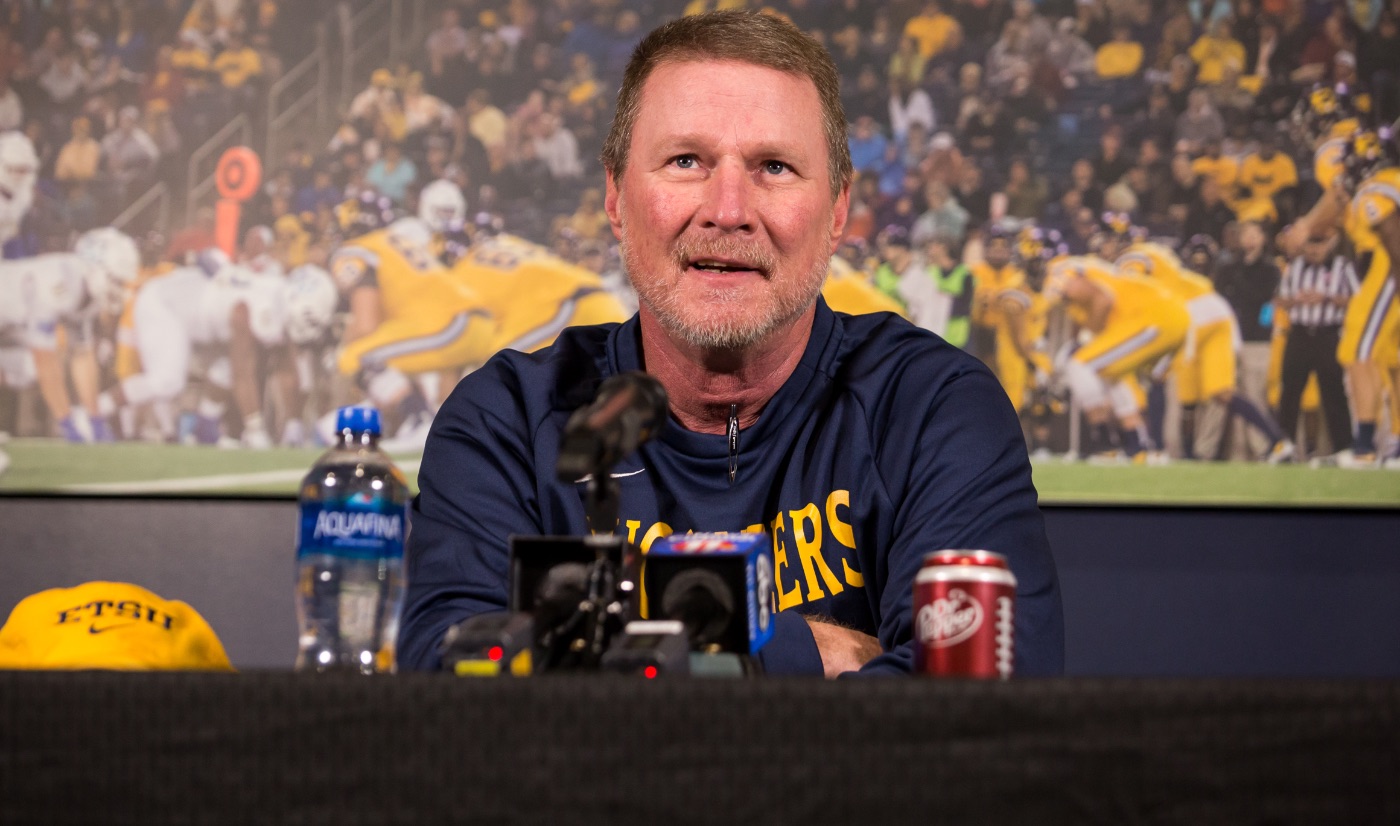 JOHNSON CITY, Tenn. (Nov. 18, 2018)– After learning its postseason fate earlier in the day, the ETSU football team met the media following Sunday night’s practice to talk about its first round matchup with Jacksonville State.

The Bucs face No. 7 Jacksonville State this Saturday at 7:30 p.m. ET inside Burgess-Snow Field in Jacksonville, Ala.

Below are comments from Coach Sanders, Gatewood, Herink, Player and Weigel.

It's nice when you control your own destiny. When we didn't control it anymore, and it's in someone else's hands, you can sit around worrying about it. But, as I've said a million times, I don't worry a whole lot about what I can't control.

ON EXCITEMENT AROUND THE TEAM

Obviously, we would have liked to had the only one and not to have had shared it, but just to get the trophy with our name on it is special. The opportunity to get to go play again, keep this team alive one more week. Every team has a one year life expectancy, and when the season's over, that team is done. We get to keep this team alive one more week. We had 11 guaranteed games and now we're in overtime. We are preparing for 12, and our hope is to get to 13.

I would've believed it was possible. It is the goal. It's why you do this. Once I was around the guys through spring practice, I was around them through the summer, around them through August, I knew this was a unique collection of individuals that had an unbelievable desire to do well and a desire to win. They wanted to buy into what I was trying to sell and what our coaches were trying to sell. They were hungry to win. That's the one thing. If you go back through all my comments through the spring and summer, everything was about how hungry this team was and how much they wanted to win. It's amazing how once you get a little taste of success, you want more.

It's kind of like eating potato chips. You eat a couple of chips or eating Cool Ranch Doritos. You have a couple of them, you then have to finish the bag. Right? Once we started having some success, we wanted more success and we plan on having a little run here. Who knows? We have to go play well. We learned yesterday that if you don't play well and play your best, you can be knocked out at any moment. This team is hungry. It's a unique collection of young men that I've been very fortunate to be around.

Game 12 is no different than game one. The field is the same size. They will have 11 guys on the field and we will also 11 guys out there. It doesn't matter how many people are in the stands or whether there are television cameras there. Whether it's in the playoffs or whether it's game two, you have to win it to have a chance to get to the playoffs… so every game is important. Every play of every game is important. You play them all the same. We intend to prepare like we've prepared every week. We need to worry about ETSU and try to get ETSU to be the best team we can be. If we are, that's probably going to be good enough.

ON WHEN STUDYING JSU FILM STARTS

As soon as we get back over to The Dome. The tape was coming in as we were coming out here on the practice field, so a couple of our young coaches were still back at the Dome getting it in, getting it loaded into computers. We are all eager to get started on it.

They're a good football team. This isn't a new experience for them. They're used to going to the playoffs. It's not going to be new. It's not going be different. It's what they expect. It speaks volumes for their program and what they've been able to do. It's new for us, but it doesn't change how you go approach the game or how you play or anything else. I don't think that will have any impact on the outcome Saturday.

ON THIS YEAR BEING DIFFERENT THAN PREVIOUS YEARS

In the past after our last game we knew it was going to be our last game, so after the game yesterday, it just didn't feel like it was the last one. Knowing that we still had a shot to keep playing felt great.

ON GETTING THE SOCON TROPHY

Dr. Noland (ETSU President) and Scott Carter (Athletic Director) always said that we came here on a vision. When they pulled that SoCon trophy out and we got to see our name it, everything really sunk in there. It was awesome to see it, but we still have a lot of work to do.

We are done with classes on Tuesday this week, so that will give us plenty of more time to film study and check them out more. But we just need to approach it just like any other week. We don't need to do anything special, we need to focus on having a good week of practice.

ON WHEN HE FOUND OUT THE BUCS WERE IN THE PLAYOFFS

I was in the training room watching the show, and I was thinking if we don't get this one, then we're not getting in. So it was good to see our name pop up there, and it’s just a really cool feeling to know that we're about to experience this playoff.

It is really exciting. I was more excited than I thought I would be, and that puts it in perspective. Even though we have had the 12-year break and now we're back, football was still played here a long time. So to only be the second team to ever do this is something really special.

We played at Montana State, JMU and Tennessee and all of those environments were really cool. It really feels like you're playing big time college football. I think it helps that we have so much experience (playing in large venues) that it really won't shock many guys. It'll be a great experience and we are all looking forward to going down there.

ON WORK STILL TO BE DONE

We still have three more practices this week and then a walk-through on Friday, so we still look at that as the reason why we're out here is to win the game. It's great that we have this experience, but it's opportunity 12, so let's go out there and make the most of the opportunity.

ON NOT GOING HOME FOR THANKSGIVING

It's a good thing. We've been home the last four Thanksgivings, so it’s good that we won’t get to be home for this one. We'll get to go home for a long time after this season, so we're soaking up every last second up here now. It will be cool to experience Thanksgiving with the team and it'll be another chapter of bringing football back.

ON SEEING THE SOCON TROPHY FOR THE FIRST TIME

Dr. Noland (ETSU president) and Scott Carter (ETSU Athletic Director) came in today and showed off the SoCon trophy. I had chill bumps because I remember two years ago, that was my screen saver on my phone. I knew those were pretty lofty goals, but I thought it's something to look at, so when I saw it in person it was special. You dream about things like that and then when it actually come to fruition, it's a pretty cool moment.

ON TRYING TO EARN RESPECT

Personally, I think this entire season has been really cool because it's another trailblazing path that we've been on. So hopefully like Kennesaw State did last year, they were able to garner some respect for their program. I think their ranking showed that this year. If we can get that level of respect nationally for this program, I think that's just another way we've done our job in starting this program.

ON HOW HE FOUND OUT THE BUCS MADE THE PLAYOFFS

ON KNOWING MAKING THE PLAYOFFS WAS POSSIBLE

We felt it was possible before the season even started. Even in the spring, we felt like we had a chance to do something because most of the people on the team that played the major parts have all been together since the beginning. We knew we were different. We knew nobody was going to expect us to do what we did this year. But we have a little phrase that we say – "Been them? We been like this." It all came together this year, but we already knew what we had. We just had to put it all together.

ON THE LAST 24 HOURS

We wanted to win the title outright, but we still won a title. Then we had to wait and see if our season was going to continue. We got up and hung out this morning. Then when we saw that we made it, we went to the Dome and got back to work. We got in the recovery mode, got back out here practicing, getting loose.

I was hoping we could get in. It’s exciting to get a chance to come out and play another game against an opponent like Jacksonville State. It's a good opportunity for this program to get into the playoffs.

ON TO STILL BE PLAYING

It’s exciting just to be able to have this opportunity with all these guys that we came in with. We have gone through so much adversity and had some tough losses. There's a lot of stuff we've gone through that a lot of people don't normally have to deal with. We built this program from the ground up. I think we've built a good foundation coming up. Now we have to show these younger guys what it takes to win, practice, what practice has to be like in the weight room. I think we were able to show them that, so it's exciting we got another opportunity to go out, play and hopefully win.