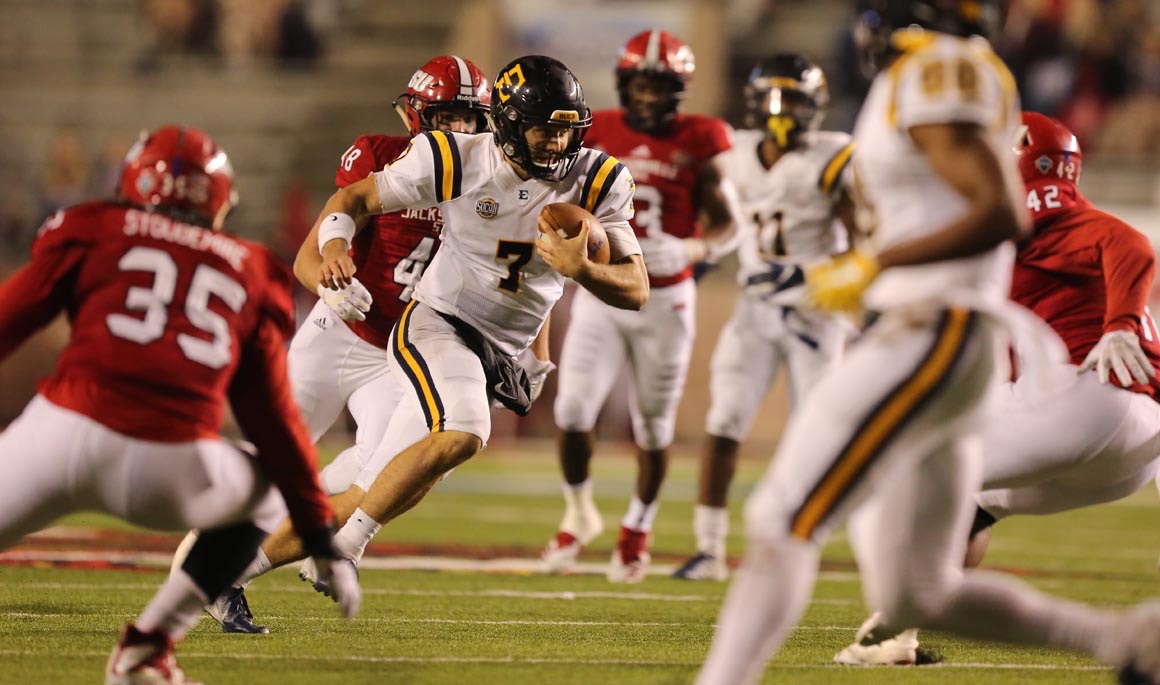 JACKSONVILLE, Ala. (Nov. 24, 2018)– The ETSU football team saw its historic season come to an end in the first round of the FCS Playoffs, as the 21st-ranked Buccaneers suffered a 34-27 setback to No. 8 Jacksonville State on Saturday night at Burgess-Snow Field.

The Buccaneers, who were making just their second playoff appearance in program history, led 20-10 at halftime, but saw the Gamecocks score 24 of the final 31 points to finish off their comeback.

Like they did all season, the Blue and Gold fought until the very end but fell one inch short of a game-tying touchdown late in the fourth quarter. After seeing JSU cap off a stretch of scoring 24 unanswered points to go ahead, 34-20 with 7:34 remaining in the fourth quarter, ETSU responded with a two-minute scoring drive as a 10-yard touchdown run by redshirt senior quarterback Austin Herink (Cleveland, Tenn.) made it a one score game with five and a half minutes remaining. Following the Buccaneer defense recording their fifth three-and-out of the night, ETSU got the ball back on its own 46-yard line with 4:22 remaining. In just five plays, the Bucs marched down to the JSU four-yard line, thanks to Herink finding Southern Conference  Freshman of the Year Quay Holmes (Powder Springs, Ga.) for a 25-yard completion on a fourth down play. Unfortunately, on first-and-goal from inside the five, Holmes took an outside toss and had the ball jarred loose at the goal line, resulting in a touchback. The Bucs had one final drive as they got the ball on their own 17-yard line with 1:39 remaining; however, the drive stalled on their 44 and the Gamecocks were able to run the final minute and nine seconds off the clock.

The Buccaneers outgained one of the top offenses in the FCS as ETSU totaled 436 yards – the most given up by the Gamecocks this season. The Bucs threw for 260 yards and rushed for 176, while JSU ended with 421 yards (226 passing/195 rushing).

Herink finished 17-of-39 for 260 yards with one touchdown, while rushing for 17 yards and one score. Holmes and Saylors combined for 159 yards on the ground, while Braxton Richburg (Hoschton, Ga.), Evan Wick Hallettsville, Texas) and Kobe Kelley (Knoxville, Tenn.) each finished with three receptions.

Defensively, the Bucs forced two takeaways, including a 60-yard pick-six by sophomore defensive back Titus Tucker (Lenoir, N.C.) to end the first quarter. Fellow sophomore defensive back Tyree Robinson (Gainesville, Ga.) posted his SoCon-leading sixth interception of the season in the second quarter, which led to JJ Jerman’s (Seymour, Tenn.) 45-yard field goal to end the first half. Junior linebacker JD Griffin (Kodak, Tenn.) made his first collegiate start and totaled a career-high nine tackles, while Robinson added eight to go with his interception.

The Bucs ended their season with the third-most wins in program history as ETSU finished 8-4, while JSU, who advances to take on No. 7 national seed Maine next Saturday, moved to 9-3.

ETSU’s 436 yards of total offense was the most put up against Jacksonville State’s defense this season.

Saturday marked the Bucs’ first playoff game in 22 years and just the second in program history – first came in 1996 … It was also just the third-ever meeting between the two programs and first since 1960.

The Bucs’ eight wins this season are the third-most in program history, with the most wins coming in 1969 and 1996 when those ETSU teams finished with 10 victories … The eight wins were also the most by a first-year head coach as Randy Sanderscompleted year one in Johnson City at, 8-4.

ETSU was one of two teams to represent the SoCon in the FCS Playoffs this season, while the Bucs won their first-ever SoCon title after going 6-2 in league play.

Titus Tucker recorded the Bucs’ second pick-six of the season (Tyree Robinson at The Citadel) and the third since the program restarted in 2015.

ETSU has forced at least one takeaway in 20 of its last 27 games and 30 of the last 40 contests … Saturday was the 16th time the Blue and Gold posted two or more takeaways since the restart in 2015.

JD Griffin made his first collegiate start on Saturday night and totaled a career-high nine tackles to lead the Buccaneer defense.

Weigel, who totaled four tackles on Saturday, finished his career with 420, placing him third all-time among the Buccaneer greats.

Jerman finished his career as the all-time leader in field goals made (53), second in extra-points (94) and second in scoring (253).