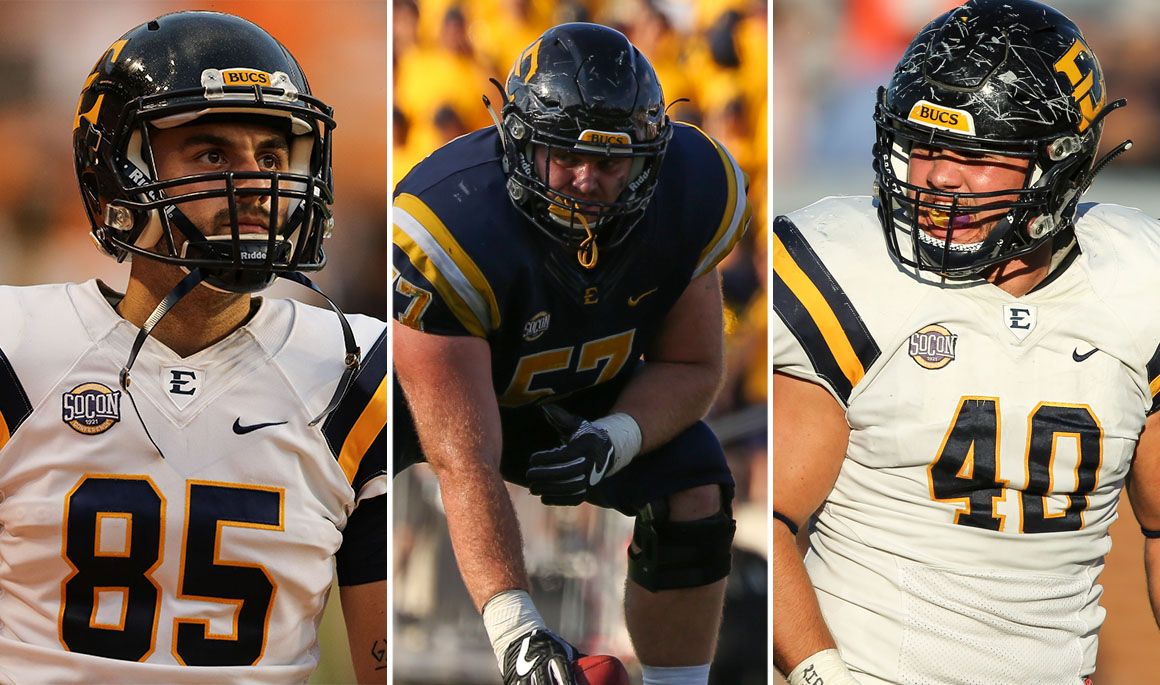 This marks the third All-American honor for Pyke, as he also received the accolade from The Associated Press and STATS FCS. The Buccaneer offensive lineman started all 45 games over his career for the Blue and Gold, while he played in 789 of the 795 possible snaps this season for the Bucs. Pyke’s blocking helped ETSU turn in nine 100-yard rushing games and four games of over 200 yards. The Clinton, Tenn. native also received the Jacobs Blocking Award, which is given to the top offensive lineman in the Southern Conference, while also earning first team all-SoCon honors.

Jerman, who was a finalist for the Fred Mitchell Award, went 19-of-23 in field goal attempts, 33-of-33 on extra-points and totaled 17 kickoffs for 1,028 yards and six touchbacks. The all-SoCon kicker set the new single-season school record for field goals made, while also breaking the all-time career mark with 53. The Seymour, Tenn. native also finished his career second all-time in program history in extra-points (94) and in scoring (253). Jerman also tied the single-game record with a personal-best four field goals in the win over The Citadel this past October. This marks the first All-American honor for Jerman.

Weigel also collected his first career All-American honor after finishing the 2018 season with 95 tackles, 14 tackles for loss, two sacks, one safety and three quarterback hurries. The Buccaneer linebacker earned first team all-SoCon honors for his production during his final season in the Blue and Gold. Weigel registered four double-digit tackle games in 2018 and finished with 25 for his career. Weigel, who started all 45 games in his ETSU career, finished third all-time on the Buccaneer tackles list with 420 – becoming just the third player in program history to eclipse the 400-tackle mark.

The Buccaneer trio helped guide ETSU to an eight-win season, a share of the SoCon title and the program’s first playoff appearance in 22 years this past 2018 campaign.