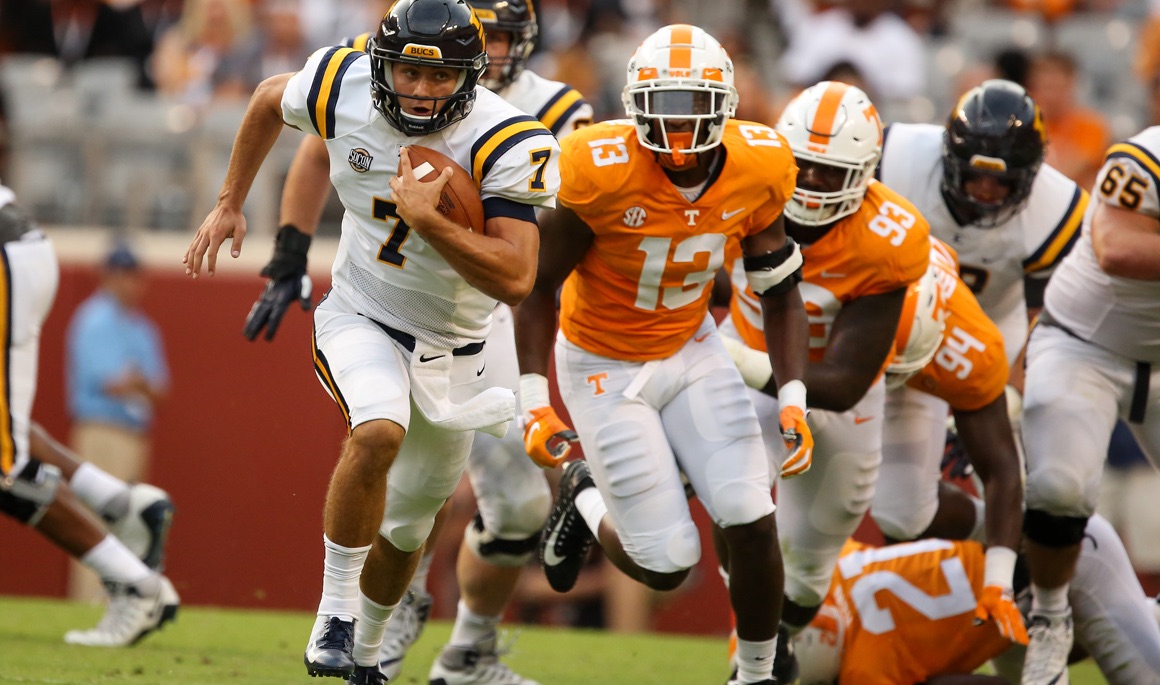 Herink signs to play professionally with the Vienna Vikings

The former ETSU Buccaneer quarterback has signed to play professionally with the Dacia Vienna Vikings, which was announced by General Manager Lukas Leitner on Tuesday.

“I am very excited to join one of the best Football teams in all of Europe,” said Herink, who will arrive in Vienna on Monday March 11 and will start practicing with the Vikings. “Being with the Dacia Vienna Vikings, I plan on competing for a Championshipand enjoying the experience of playing professional football in Europe. I can’t wait to get started.”

“Austin was instrumental for us in winning the 2018 Southern Conference Championship,” said ETSU head coach Randy Sanders. “Winning championships is in his DNA and something that he has become accustomed to. Austin has a tremendous work ethic on and off the field, and his career numbers reflect his ability to lead a team. The Vienna Vikings and Coach Calaycay are signing a young, talented quarterback in Austin and we wish them nothing but the best.”

Herink, who started the first 33 games for the Blue and Gold once the program was restarted in 2015, overcame some adversity in his final season in 2018. The Cleveland, Tenn. native lost the starting job at the beginning of the year; however, after leading the Bucs to a historic win over Furman on Sept 22, Herink regained the starting job and led ETSU to a Southern Conference Championship. After rallying the Blue and Gold from a 21-point second-half deficit against the Paladins, the Bucs went on to finish with an overall record of 8-4 and a 6-2 mark in conference play, which secured ETSU a spot in the FCS Playoff for just the second time in program history. The eight wins ranked third-most in Buccaneer history, while ETSU claimed its first-ever SoCon title and fourth conference crown in school history – the first since 1969.

“I really enjoyed my time at ETSU and have great memories of being a Buccaneer,” said Herink. “I was fortunate to build a lot of great relationships during my time at ETSU and want to thank everyone for their support. I am looking forward to this new chapter and new challenge.”

Head coach Chris Calaycay is excited to have Herink join the Vikings and hit the ground the running.

“Austin will join the Vikings next week,” said Calaycay. “Our team is prepared and ready to accept him into the Vamily heading into our season opener versus Prague.”

“Austin’s skill set – tall, mobile, with an outstanding arm and a high football IQ – along with his personality and work ethic convinced us to pick him,” said Koessler. “He is exactly what we were looking for in a quarterback and in a team leader.”

The Vikings open their 2019 season on Saturday, March 16 against the Prague Black Panthers. Many of the Vikings’ home games will be streamed live via http://streamster.at.

ABOUT THE DACIA VIENNA VIKINGS

The Dacia Vienna Vikings is an American Football Club based in Vienna, Austria. Founded in 1983, the Vikings are known as one of Europe's most dominant clubs, having won the prestigious Eurobowl title five times as well being the runner-up five times. In the national championship the Dacia Vienna Vikings are holding the record of 14 Austrian Bowl victories. Currently over 700 athletes in the fields of American football, Cheerleading and Flag Football are members of the Vikings (www.daciavikings.com).

For more info on the Dacia Vienna Vikings in English, please visit: https://kikiklepsch.wixsite.com/daciaviennavikings