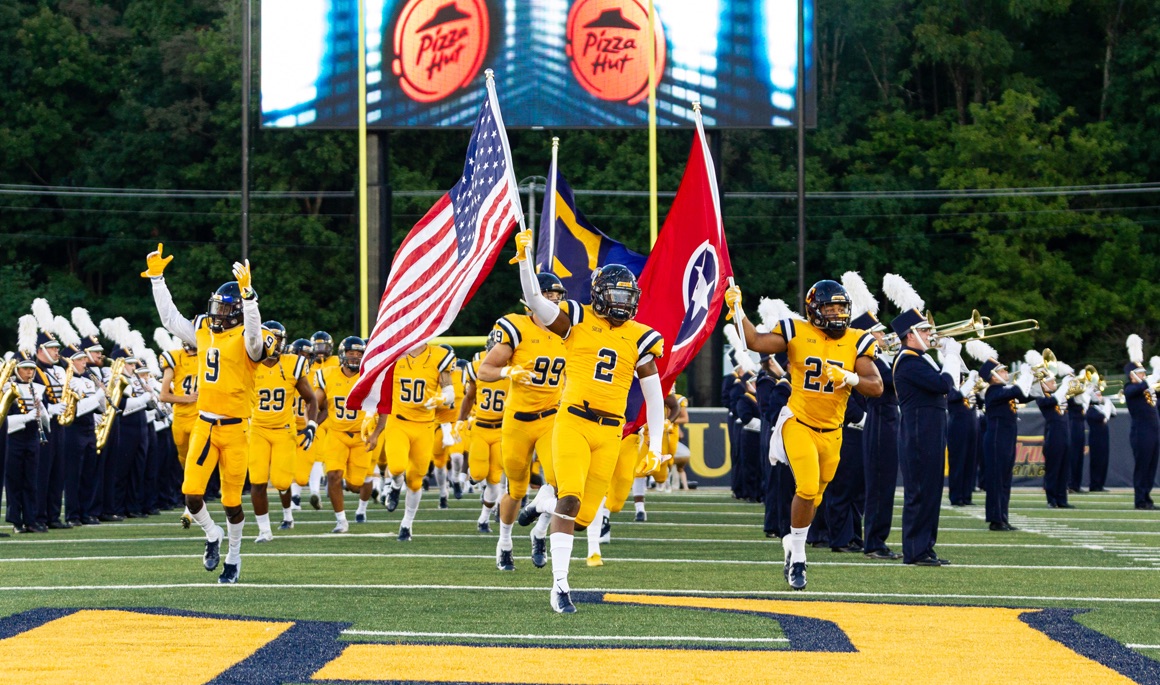 JOHNSON CITY, Tenn. (Sept. 6, 2019) – The ETSU Buccaneers will showcase the 2019 roster in front of the home crowd for the first time this season as the Bucs gear up for the 2019 home opener against Shorter University. Kickoff is scheduled for 7:35 p.m. at William B. Greene, Jr. Stadium.

Next Man Up
Trey Mitchell provided a spark off the bench for the Bucs in the season opener at Appalachian State. Following the injury to starting quarterback Chance Thrasher, Mitchell stepped in and delivered a convincing performance after finishing 12-of-19 for 117 yards and one touchdown against a Top 25 defensive unit. Mitchell orchestrated ETSU’s lone touchdown drive, finishing 7-of-7 for 71 yards and finding Nate Adkins for a five-yard touchdown pass, the first collegiate touchdown pass in Mitchell’s career. Adkins’ receiving touchdown was the second of his career. The touchdown drive lasted 6:56, the longest scoring drive for the Bucs since a 7:51 drive against Gardner-Webb on Oct. 6, 2018. The Bucs had two drives last season that were longer than Saturday’s 6:56 drive, both resulting in JJ Jerman field goals. The longest drive of the 2018 season was 9:39, with Jerman capping off a 15-play, 70-yard drive with a 25-yard field goal.

The Richburg Keep Getting Richer
Braxton Richburg led the Bucs in receiving yards in Boone, finishing with four recep- tions for 77 yards, just five shy of tying his career high. Richburg has elevated as a premiere target for ETSU quarterbacks in the last six games, pulling down 25 catches for 363 yards, averaging 60.5 yards per game. During the six-game span, Richburg has accounted for 20+% of receiving yards in five of the six contests.

Record in September
The Bucs hold a 71-100-2 record in the month of September, including 8-9 since bring- ing football back to Johnson City in 2015. This will also be the sixth game played on Sept. 7 in program history. ETSU is 1-4 in previous games played on Sept. 7, defeating Mars Hill in 2002 by the final score of 20-10 in the most recent Sept. 7 contest.

How about the Hawks?
Shorter will kick off its 2019 season with the Bucs on Saturday, hoping to turn things around from previous seasons. In 2018, the Hawks finished 0-11 and have fallen in 39 consecutive games heading into Johnson City. The Hawks last victory came against Mississippi College on Oct. 3, 2015 where they prevailed, 42-23. Shorter is 4-30 on the road since 2013 and are led by Zach Morrison who was a member of the inaugural team in 2005.

Offensively, Shorter is anchored by Tupac Lanier, rushing for 146 yards and two touchdowns in 2018. The Hawks also return Tyler Pullum, a senior quarterback that threw for 1,856 yards in 2018 with 11 touchdowns and 18 interceptions. Pullum’s primary target was Elijah Gilbert, pulling down 47 receptions for 428 yards and six touchdowns.

The defensive side of the ball was a struggle in 2018 for the Hawks, yielding over 50 points per game in 2018, while the offense accounted for just 13.3 points per contest. However, Nehemiah Reddish is making himself known as the premiere tackler, returning for the 2019 season following 92 tackles in 2018.

Series History
This will be the first ever meeting between ETSU and Shorter. The Hawks are 0-2 against Southern Conference foes since 2016, losing to both Chattanooga and Samford.