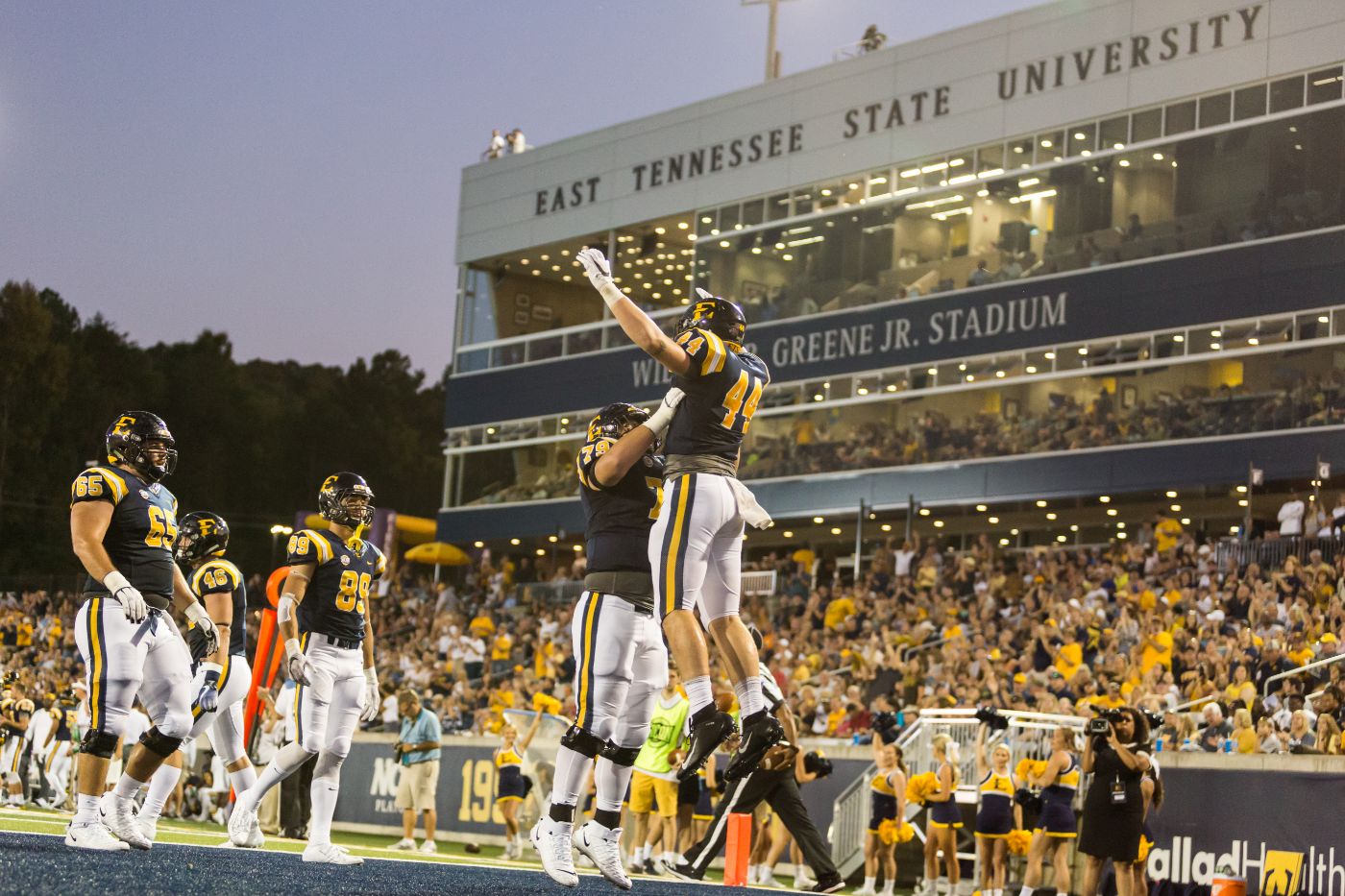 Bucs ready for second consecutive game under the lights

JOHNSON CITY, Tenn. (Sept. 13, 2019) – With the home-opening victory behind them, the ETSU Buccaneers will turn their attention to the Keydets of VMI in the 2019 Southern Conference opener. Kickoff is scheduled for 7:35 p.m. at William B. Greene, Jr. Stadium.

SoCon Opening Numbers
The Bucs are an even .500 in SoCon openers, holding a 14-14 overall record. During the 28 games, the Blue & Gold have reached streaks of seven consecutive losses, countered with a pair of three consecutive triumphs. ETSU is 9-5 when playing SoCon openers at home, averaging 23.4 points per home-SoCon-openers. When winning SoCon openers, ETSU is averaging 28 points per game, while holding opponents to just 15.4. A noteable in SoCon openers, the Bucs have shut out just one opponent in such games, defeating VMI by the final score of 38-0 in 1996.

History with the Keydets
The Bucs are 15-9 all-time when playing VMI. Interesting note, 12 of those 24 games have been in the SoCon opener for the Bucs. ETSU is 9-3 in SoCon openers when facing the Keydets, including 6-1 at home. VMI won the first showdown in Johnson City, before the Bucs rattled off six consecutive SoCon-opening victories at home. ETSU is outscoring VMI, 189 (27.0) - 92 (13.1) in Johnson City when the game falls as the SoCon opener.

What Can’t He Do?
Nasir Player has proven to be a man of many talents on the field, being named preseason Defensive Player of the Year for the SoCon. In Saturday’s win over Shorter, Player reg- istered a career first with a fumble recovery in the first quarter. Later in the frame, Player pulled down his first two-point conversion reception. Two years ago in the matchup with VMI where the Bucs won 24-6 in Johnson City Player recorded his first touchdown of his entire playing career, including high school, with a four-yard interception return.

He Could Go All the Way
In the 2018 matchup between ETSU and VMI, Quan Harrison returned a punt for a touchdown to open up the contest after VMI was held to a three-and-out to start the game. Harrison received the punt at the ETSU 31-yard line and returned the ball to the house for a 69-yard punt return for a touchdown before the Bucs’ offense ever took the field. The touchdown return by Harrison was the first punt return touchdown since 1997.

Party Like it’s 1969
On Saturday, we will honor the 1969 ETSU Bucs that finished the season 10-0-1, the only Buccaneer team to finish undefeated, while tying the program record for most wins in a single season. The Bucs defeated Terry Bradshaw and Louisiana Tech in the Grantland Rice Bowl to cap off the undefeated season. The 1969 Bucs still holds the program record for scoring defense (9.7), rush defense (101.9) and defensive interceptions (37). In the Grantland Rice Bowl, the Bucs defense held Louisiana Tech to negative-43 rush- ing yards, which still holds as the lowest rushing yards in ETSU single-game history. The Bucs also sacked Bradshaw 12 times and forced him to throw three interceptions.

Keying in on the Keydets
The Keydets enter the weekend with a 1-1 overall record, falling in the season opener at Marshall before rebounding with a lopsided 63-21 triumph over Mars Hill. The Keydets are eyeing their first 2-1 start since 2016 when they defeated Morehead State and Bucknell.

One cannot talk about VMI without talking about the key factor in Reece Udinski, the junior quarterback from North Wales, Pa. Udinski is 37-of-64 on the season with five touchdown passes and 456 yards. During his career, Udinski has thrown for 27 touchdowns, just one shy of jumping into a tie for fourth all-time in VMI history. Alex Ramsey continues to have a strong start to the season for VMI, accounting for 183 yards total offense in VMI’s 63-21 win over Mars Hill.

Defensively, the Keydets have eight players with double-digit tackles, led by Aljareek Malry with 14 tackles on the season. Through the first two games, VMI has forced six turnovers, including five interceptions. Kaleb Tucker and A.J. Smith have each recorded two interceptions. Tucker was recently named SoCon Defensive Player of the Week.

In 2018, VMI dropped five games by 10 points or less, including a three-point deficit to the Bucs.