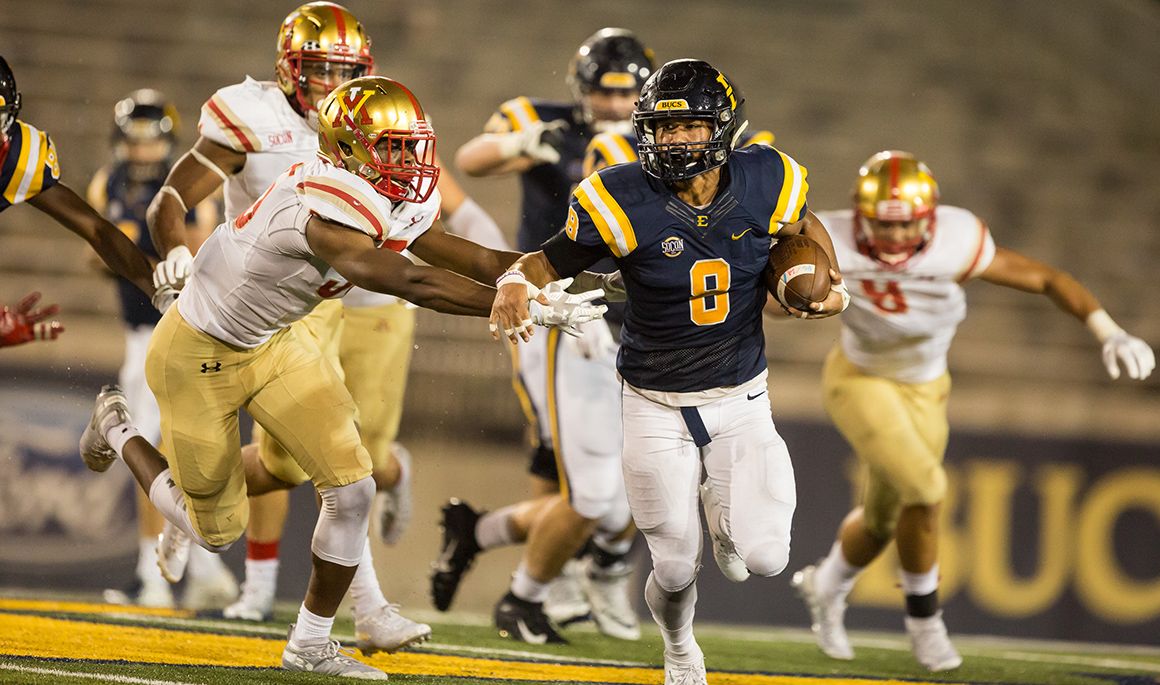 ETSU falls to 1-1 in Greene Stadium

JOHNSON CITY, Tenn. (Sept. 15, 2019) – In a game that was delayed a total of 132 minutes and included one overtime, the fans had to wait until 1:08 a.m. to find out the result in the Buccaneers 2019 Southern Conference opener. Unfortunately, the fans witnessed the first loss at Greene Stadium on the season as the Bucs dropped a nail-biting 31-24 contest to conference foe, VMI. With the loss, ETSU falls to 1-2 (0-1 SoCon) on the season, while the Keydets improve to 2-1 (1-0 SoCon).

Both offenses stalled in the first half, taking a 7-7 tie into the locker room following a 65-minute delay with five minutes to play in the second quarter. The Bucs held the narrow 7-0 advantage going into the delay before the Keydets scored just minutes in the return to the field.

ETSU outscored the Keydets 14-10 in the final quarter of regulation, setting up for the nail-biting finish. The two touchdown drives by the Bucs in the closing quarter came via the 20-yard reception by Anthony Spagnoletti (Bealeton, Va.) and a 61-yard touchdown run from Jacob Saylors (Jasper, Tenn.). The Keydets forced overtime with a 30-yard chip shot with 10 seconds left on the clock.

The Keydets would go on to score the lone touchdown in extra time, a 21-yard pass from Reece Udinski to Javeon Lara. The Bucs failed to convert a second fourth-down attempt in their offensive possession.

HOW IT HAPPENED:
Second quarter

NEXT GAME UP
ETSU will return to action when the Bucs welcome Austin Peay into William B. Greene, Jr. Stadium on Saturday, Sept. 21. Kickoff is slated to begin at 7:30 p.m.