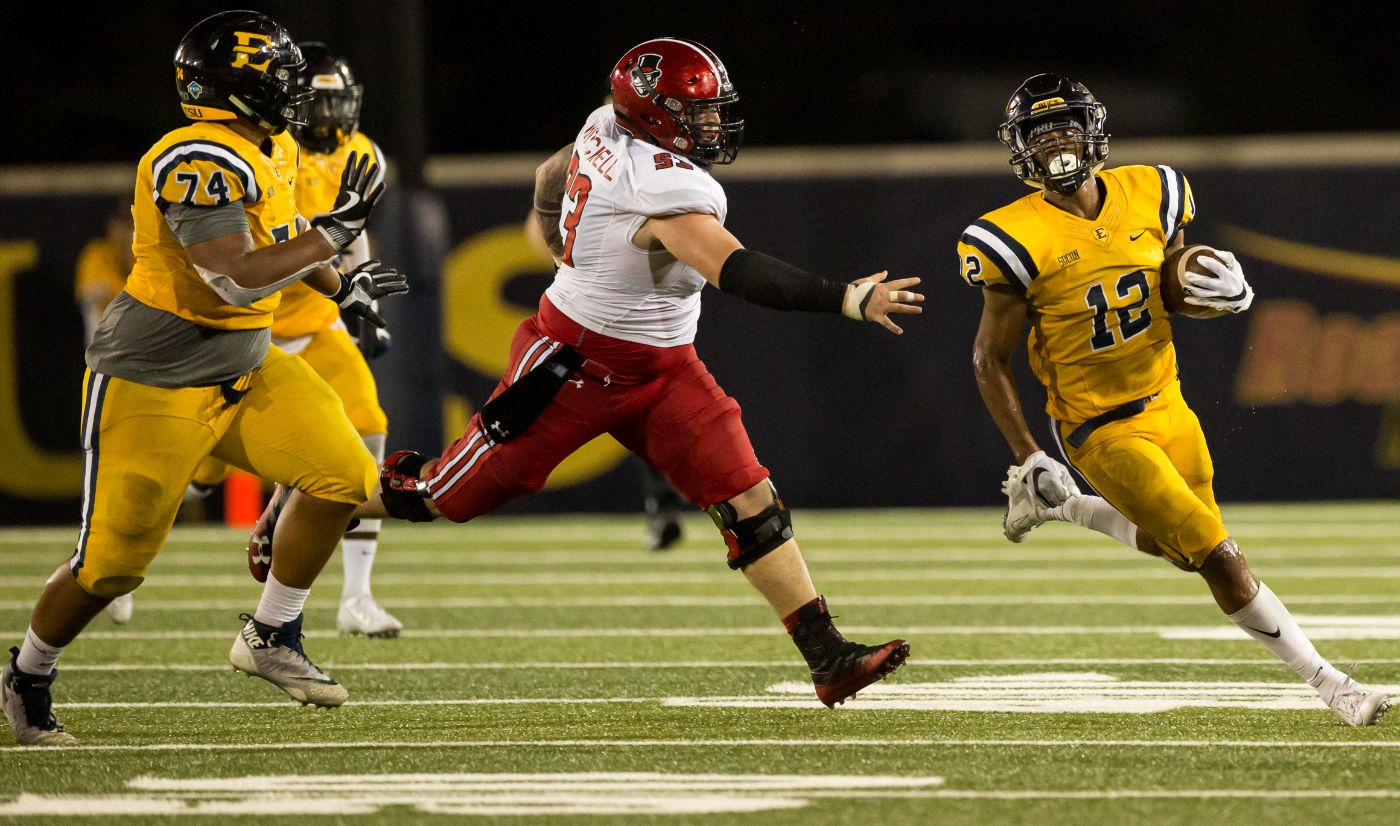 JOHNSON CITY, Tenn. (Sept. 21, 2019) – A stout second-half defensive effort willed the Bucs to the 20-14 victory over Austin Peay in front of a raucous crowd at William B. Greene, Jr. Stadium on Saturday night. In front of the second-largest crowd in Greene Stadium history (9,350), the Bucs’ defense recorded back-to-back interceptions on the final two drives of Austin Peay to seal the win.

The defense held Austin Peay to just 79 yards of offense in the second half, including just six total yards in the third quarter.

The Governors struck first with a 54-yard touchdown pass from JaVaugh Craig to DeAngelo Wilson for the 7-0 advantage.

The Bucs retaliated with 10 unanswered points beginning with Tyler Keltner’s (Tallahassee, Fla.) career-high 48-yard field goal to get ETSU on board. The Blue & Gold then took their first lead of the game as Malik McGue (Johnson City, Tenn.) punched in his first rushing touchdown in a Bucs uniform, second of his career, to put ETSU ahead 10-7.

However, the Governors marched down the field to put seven on the board prior to halftime with a Kente Williams 1-yard touchdown run that capped a 10-play, 75-yard drive to put Austin Peay ahead 14-10.

For the second time during the game, the Bucs went on a 10-0 run to take yet another lead. This time the spurt started in the fourth quarter with a Quay Holmes (Powder Springs, Ga.) 2-yard touchdown run with 6:58 left on the clock, his first of the season. Holmes’ rush concluded a 12-play, 85-yard drive. Keltner concluded the scoring with a 37-yard field goal to push the ETSU lead to 20-14 with 1:38 remaining in the game.

Sandwiched around Keltner’s field goal were interceptions by MJ Woods (Seale, Ala.) and Artevius Smith (Birmingham, Ala.) on back-to-back Austin Peay drives, the first two interceptions of the season for the Buccaneer’s defense. Upon review of Smith’s pick, the call was overturned from incomplete to an interception, allowing the Bucs to line up in victory formation for the triumph.

NEXT GAME UP
ETSU will return to action next weekend when the Bucs travel to Greenville, S.C. for a Southern Conference showdown with Furman. Kickoff is scheduled for 1 p.m.