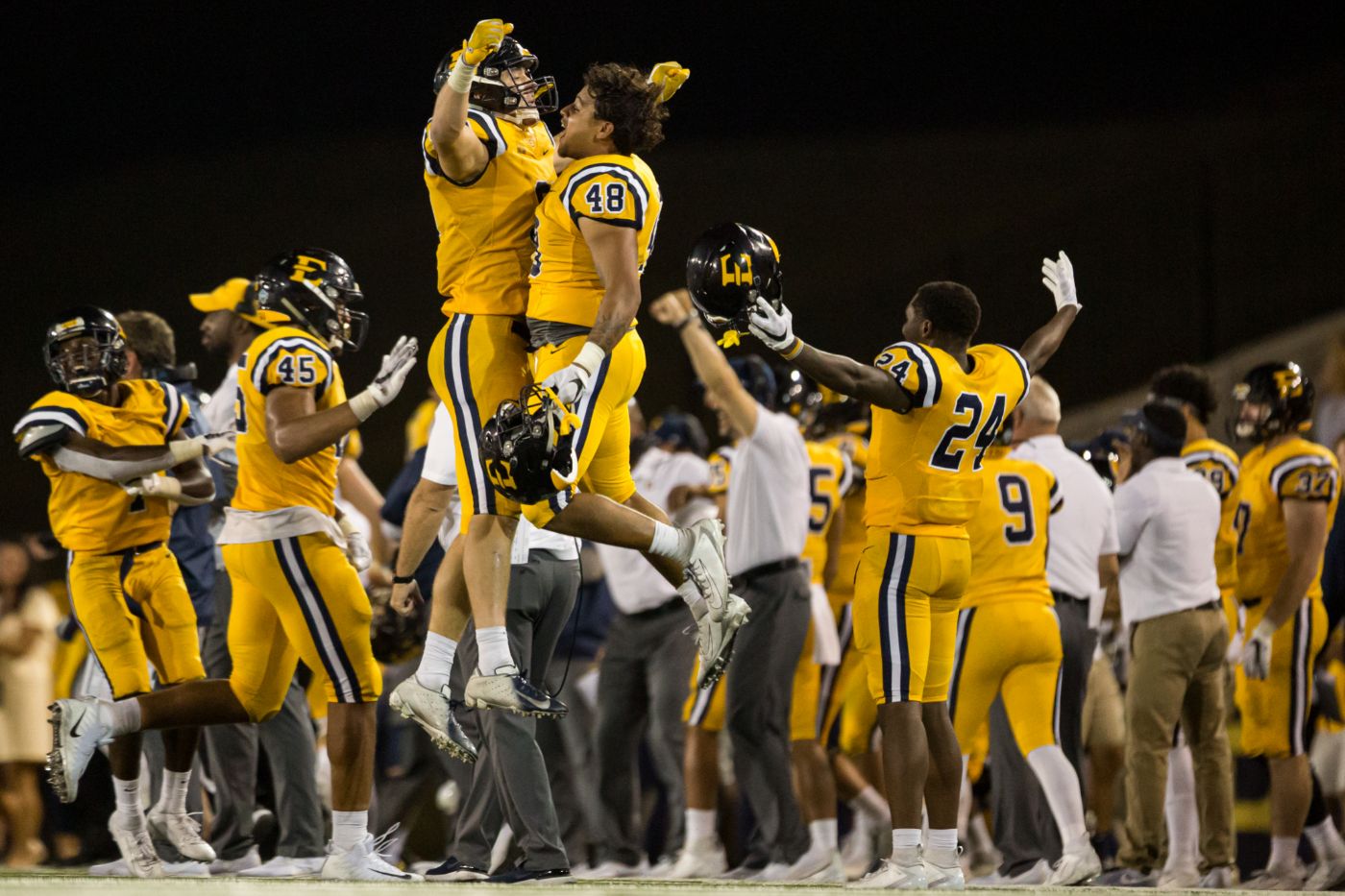 ETSU will compete in first road SoCon game of 2019

GREENVILLE, S.C. (Sept. 27, 2019) – The ETSU Buccaneers football team will travel to Greenville, S.C. on Saturday for the first road Southern Conference test of the season for the Blue & Gold. The showdown against the Paladins will kick off at 1 p.m. at Paladin Stadium.

Coach to Cure MD
On Saturday, Sept. 28, ETSU Football will be one of more than 500 universities taking part in the Coach to Cure MD campaign. The ETSU coaching staff will be wearing shoulder patches on the sidelines to help raise awareness of the program during the game against Furman in Greenville, S.C. Now in its 11th year, Coach to Cure MD seeks to raise awareness and money to fund research for Duchenne muscular dystrophy, the most prolific lethal genetic disorder of childhood. Over the last 11 years, Coach to Cure MD has raised over $2.1 million and every dollar has helped advance promising research, which led to two drug approvals for Duchenne in 2016. Duchenne muscular dystrophy is the most common fatal genetic disorder diagnosed during childhood. The disease affects approximately 1 in 5,000 boys worldwide crossing all cultures and races. Due to its progressiveness, those living with Duchenne will need the assistance of a wheelchair in their adolescence, will lose upper body function in their teens and sadly lose their battle with Duchenne around the mid-twenties. Duchenne is 100% fatal, but since Coach to Cure MD in September 2016, two drugs have been approved in the U.S. by the FDA with additional therapies currently under review. Fans can support the ETSU coaching staff in the fight against Duchenne by either contributing online at www.CoachToCureMD.org or by texting the word CURE to 501501 and donate $25. When texting, you will receive a message back two seconds later asking you to confirm your donation and then just reply to this message with the word YES and you will receive another text back thanking you for your donation. The $25 will be added to your next phone bill under a donation line and you will never have to enter your credit card or debit card information.

Mr. Variety
Jacob Saylors has proven to be a key instrument in the Buccaneer offense, in both the running game and the passing game. His last three contests combined, Saylors has accumulated 360 all-purpose yards, averaging 120 yards per game. In the home opener against Shorter, Saylors rushed for 90 yards. The following game against VMI, Saylors broke through for 156 all-purpose yards, including 112 rushing yards. In the most recent bout with Austin Peay, Saylors concluded the game with 114 all-purpose yards, including a career-high 56 receiving yards. Saylors led the Bucs against the Govs with a team-high 56 receiving yards and seven receptions.

It's a Stone Wall
After a tough first half allowing 280 yards of offense, despite only 14 points surrendered, the Bucs defense turned a complete 180 in the second half of play, holding the Govs off the scoreboard. More impressive is the fact that the Bucs held Austin Peay to just 79 yards of total offense in the second half, including just six total yards in the third quarter. Prior to the game, the Govs were one of four FCS teams that had not allowed a sack all season. ETSU made sure that statistic changed, getting to JaVaughn Craig twice in the contest. The Bucs also held Austin Peay to just 126 yards rushing, the lowest total since the 2018 season opener at Georgia when the Govs ran for just 92 yards.

Take your Pick
MJ Woods and Artevius Smith delivered the turnovers that the Bucs have been reaching for through the first four games. ETSU entered week four without a single interception, the same defensive unit that forced 15 interceptions a season ago. However, MJ Woods was the first to put an end to that stretch with a timely pick in the fourth quarter as the Govs were driving and down by just three. Woods returned the interception 37 yards as the Bucs milked the clock on their next possession and buried a field goal to go up 20-14. Austin Peay’s final fighting chance was halted by Smith, recording his first interception of the season and the Bucs’ second pick in the fourth quarter. Smith’s takeaway went under further review and was ultimately ruled an interception as his knee was down while he maintained the possession. Smith’s interception was a back breaker to the Govs as he pulled down the ball with one minute remaining and zero Austin Peay timeouts, allowing the Bucs to line up in victory formation for the win.

Series History
The Bucs have not boded well against the Paladins in program history as Furman leads the all-time series 25-8. However, the Bucs have had the most recent laugh as the Paladins squandered a 21-point lead in Johnson City, Tenn. last season, allowing ETSU to complete the largest come-from-behind win in program history. The Bucs are just 2-15 all-time when playing in Greenville, pucking up wins in 1997 (58-28) and 1979 (28-24). The Paladins hold a 6-4 advantage in the previous 10 games, despite ETSU snapping a five-game losing skid with the win in 2018. Furman won a string of nine games against the Bucs from 1987-95.

Preparing for the Paladins
Furman enters the weekend with a 2-2 record, including 1-0 in SoCon play after a dominating 45-10 victory over Mercer on Sept. 21. The Paladins did everything right on both sides of the ball, finishing the game with over 600 yards of offense and over 400 yards rushing. The Paladins’ 410 yards rushing was the first time the program eclipsed 400 yards on the ground since sprinting for 434 rushing yards against Chattanooga in 2003. The 600 yards of total offense was the first time since 2017 (against ETSU) that the Paladins reached the mark.

The Paladins are led by redshirt freshman quarterback Darren Grainger who has thrown for 694 yards and six touchdowns, while also rushing for 149 yards and four touchdowns. Grainger was named SoCon Offensive Player of the Week and STATS FCS National Freshman of the Week after his performance against Georgia State in which he finished with 311 passing yards and four touchdowns. Devin Wynn and Devin Abrams spearhead the rushing game, combining for 586 yards on the ground and five touchdowns. Wynn averages 94.75 yards per game to lead the Paladins and rank second in the SoCon.

Furman’s defense came up big in Saturday’s win over Mercer, holding the Bears to just 10 points and 283 yards of total offense. The Paladins held Mercer to just 48 percent pass completion (19-39), intercepting the ball three times and forcing one fumble. Furman’s ability to hold the Bears to below 50 percent passing was the first time since 2016 when the Paladins held ETSU to just 10-of-28 for 79 yards.

Coverage
Saturday’s game will also be broadcast on ESPN+/Nexstar with the team of Pete Yanity (play-by-play) and Jared Singleton(color commentary) providing the call.