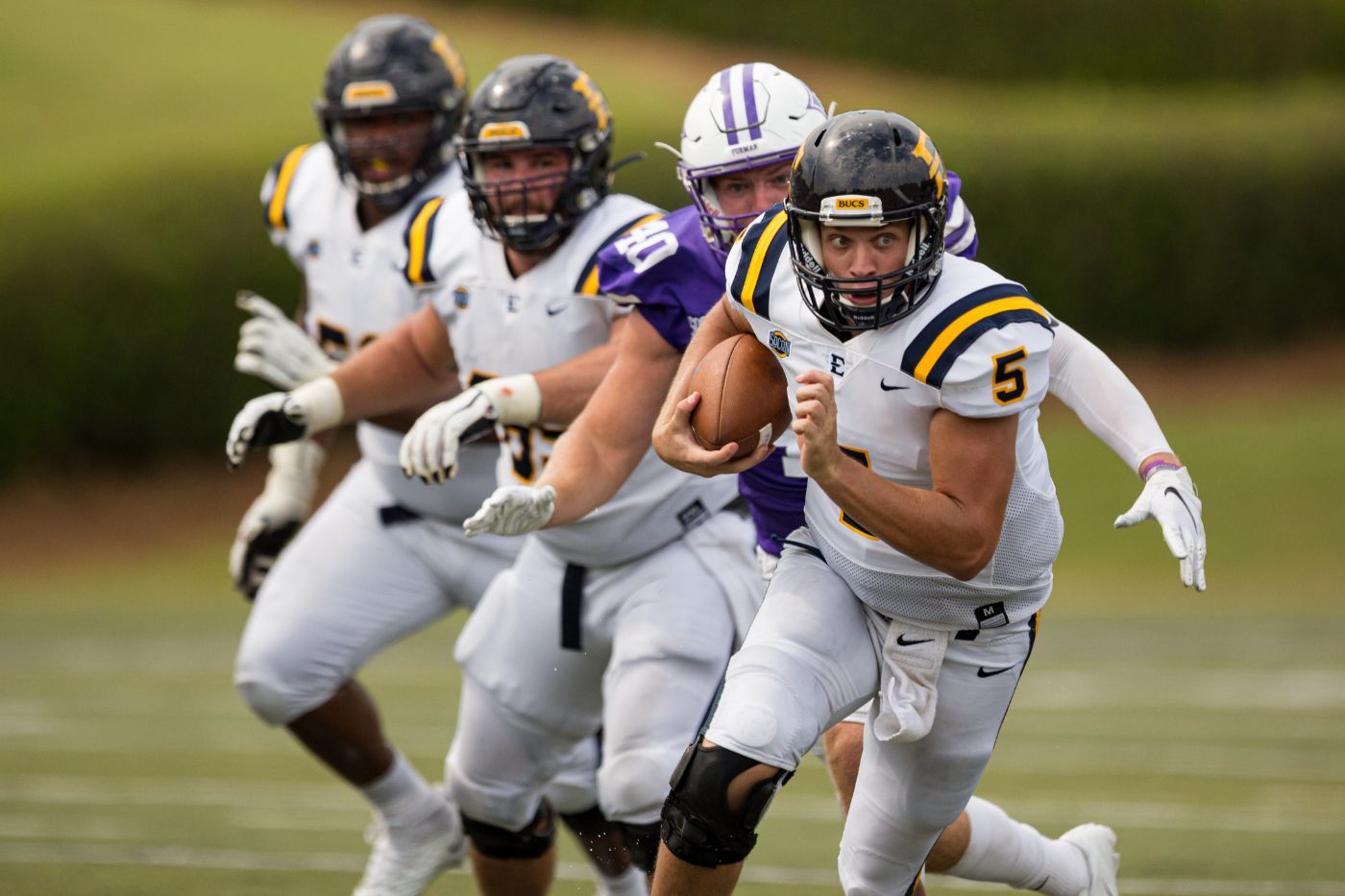 Bucs to host Wofford in only home game of October

JOHNSON CITY, Tenn. (Oct. 4, 2019) – The ETSU Buccaneers football team will hold its only home contest in the month of October on Saturday as ETSU hosts Wofford. Kickoff between the Bucs and Terriers will be at 3:35 p.m. inside William B. Greene, Jr. Stadium.

Saturday’s Festivities
Saturday’s football game against Wofford will feature several events, including the annual Blue Out game. Also taking place on Saturday is the Breast Cancer Awareness game as the Bucs will be wearing pink ribbons on their helmets in honor of those who have dealth with the illness. Prior to Saturday’s game against Wofford, the band Spank! will perform a concert starting at 12:30 on the Pepsi State in Lot 21 and will also perform the national anthem, Jimmy Hendrix style. From 11:30-1:15 p.m., the ETSU Men’s Basketball team will hold an open practice inside the CPA for those fans wanting to get a sneak preview of the 2019-20 Buccaneers and what they have to offer. Lastly, the ETSU Athletic Department will hold Bucky’s BBQ Brawl on Saturday. Entries must be submitted by 2 p.m. and all participants must RSVP to Calvin Claggett. There will be a panel of celebrity judges with various categories determining the winner. Be advised that no professional culinary entries will be accepted and the winner of the event will receive an ETSU fan pack.

Combo No. 2
Quay Holmes and Jacob Saylors have proven themselves as dynamic backs in the Southern Conference. Holmes leads the Bucs in carries (77) and total rushing yards (372). The Georgia native is averaging 74.4 yards per game and 4.8 yards per carry and has added one touchdown on the season. Holmes has also caught the ball six times for 39 yards. Saylors is leading the duo in average yards per rush, carrying the pigskin 6.5 yards per carry. Saylors has tallied 48 carries for 313 yards and a team-high three touchdowns. The Tennessee native has also proven to be a solid choice at wide receiver, pulling down 10 receptions for 81 yards. The 10 receptions for Saylors ranks third on the Bucs’ squad.

Defensive Juggernaut
The ETSU defense did everything in its power to will the win on Saturday in Greenville, S.C., holding the Paladins to 200 yards less than their season average in total offense and 100 yards less than the season average in rushing yards. After giving up a season-high 85 yards on the ground in the first quarter, the Bucs held Furman to just 86 yards rushing in the final three quarters combined. The Bucs came up with two critical turnovers, including a fumble recovery that led to the only ETSU touchdown four plays later. The Bucs also received a boost from Jared Folks and Tyree Robinson who anchored their defensive units and held Furman in check. On the season, the Bucs are second in the Southern Conference in scoring defense, holding opponents to 22.8 points per game. The Bucs are also second in rushing defense at 146.8 yards per game and second in passing defense, holding competitors to just 181.8 yards per contest. The Bucs lead the league in total defense, yielding just 328.6 yards per game, while also pacing the conference in pass defense efficiency at 116.0.

Hold the Line
ETSU’s offensive line has proven to be a strong five for the Bucs passing and rushing game. The line is full of veteran leadership, including Ben Blackmon who made the jump from left guard to center for his senior season. Blackmon has appeared and started in all 40 games in his career. The offensive line has paved the way for the Bucs to rush for 180.6 yards per game which ranks fourth in the Southern Conference. The Buccaneer front is third in sacks allowed, having surrendered just four sacks on the season. ETSU went 158 snaps between sacks before Furman was able to get to Trey Mitchell in the third quarter.

Series History
ETSU is 13-14 all-time when pairing up with the Terriers, having dropped eight consecutive contests against Wofford. The Terriers are the only Southern Conference team that the Bucs have not bested since bringing football back to the turf in 2015. The last time ETSU defeated Wofford was Nov. 7, 1998 when the Bucs handed the Terriers a 45-24 beating in Johnson City. The Bucs are 2-8 in the last 10 matchups with Wofford. In the last five contests, the Terriers are outscoring ETSU 159 (31.8) - 65 (13). With the triple option offense, the Bucs will have their hands full defensively to stop the conference’s leading rushing unit at 344.2 yards per game.

Tackling the Terriers
Wofford enters the weekend on a two-game winning streak, having most recently defeated SoCon foe VMI by the final score of 51-36. The Terriers began the season as the majority favorite to claim the 2019 crown, but a setback against Samford in game two stirred the pot early on. Since then, Wofford has scored 100 combined points in its last two games and are 2-0 in the most recent outings.

It comes as no surprise that the Terriers are the league’s leading rushing unit at 344.3 yards per game due to the triple option. Wofford’s 344.3 yards per game also rank fifth in FCS football and is 30 yards more than the team’s average in 2018. The Terriers are led in rushing and passing by quarterback Joe Newman, rushing for 405 yards on the season and two touchdowns, averaging over 100 yards on the ground. Newman has also thrown the ball for 329 yards and three touchdowns.

The Terriers defensive front appears to be one of the best in the conference, if not the FCS. Wofford is 31st in the nation in total defense and second in the SoCon, allowing 347.5 yards per game. The Terriers trail only one team in the SoCon in total defense…ETSU. Wofford does establish the top rushing defense in the league, allowing just 101.8 yards per game. The Terrier defense has surrendered just five 100+ yard rushers in the last 69 games played.

Coverage
Saturday’s game will also be broadcast on ESPN3 with the team of David Jackson (play-by-play) and Mark Hutsell (color commentary) in the booth and Kasey Marler on the sideline providing the call.