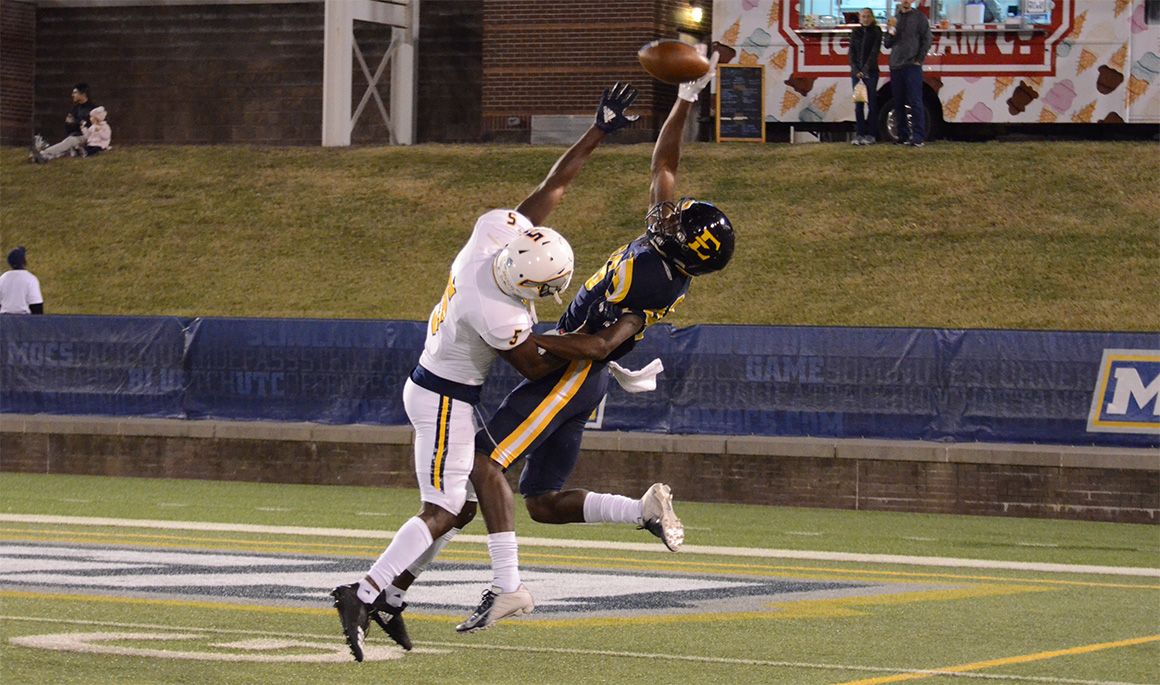 Bucs held scoreless in second half to drop rivalry contest

CHATTANOOGA, Tenn. (Oct. 17, 2019) – The ETSU Bucs dropped a rivalry game in heart breaking fashion on Thursday night in Chattanooga, Tenn. The Mocs’s Victor Ulmo buried his only made field goal of the game with 14 seconds remaining in the contest to down the visiting Bucs, 16-13.

The Mocs struck first with a 6-yard touchdown run from Ailym Ford in Chattanooga’s first drive of the game to cap off an 11-play, 63-yard drive for the early 7-0 lead. Those would be the only points for the Mocs until the third quarter.

ETSU squared the game at 7-7 following a Chattanooga blunder on a muffed punt from the Bucs. ETSU’s Dustin Nickle (Knoxville, Tenn.) recovered the fumble to set up the Bucs in prime position. Just three plays later, Trey Mitchell (Knoxville, Tenn.) found Will Huzzie (Duluth, Ga.) for a jaw-dropping touchdown reception that you will likely see on a major network in the morning. Huzzie’s touchdown catch was the first of his career and came in the second quarter with 13:08 remaining.

The Bucs added six more points in the first half with a pair of field goals from Tyler Keltner (Tallahassee, Fla.) as the freshman kicker connected on a 29-yarder and a 43-yarder. Keltner’s 43-yard connection was the second-longest field goal in his young career.

After the Bucs took the 13-7 lead into the locker room, the Mocs tied the rivalry game on their first possession of the second half with yet another touchdown run, this time a 14-yard scamper. Ulmo missed the extra point to keep the contest knotted at 13-13.

The game remained deadlocked at 13 apiece until Ulmo connected on the decisive blow with 14 seconds left. After missing his previous three field goals, Ulmo buried a 30-yard attempt to sink the Buccaneers’ chances late in the game.

NEXT GAME UP
The Bucs will be back in action on Saturday, Oct. 26 when ETSU travels to Birmingham, Ala. for a Southern Conference matchup against Samford. Kickoff at Seibert Stadium is scheduled for 1 p.m. ET.