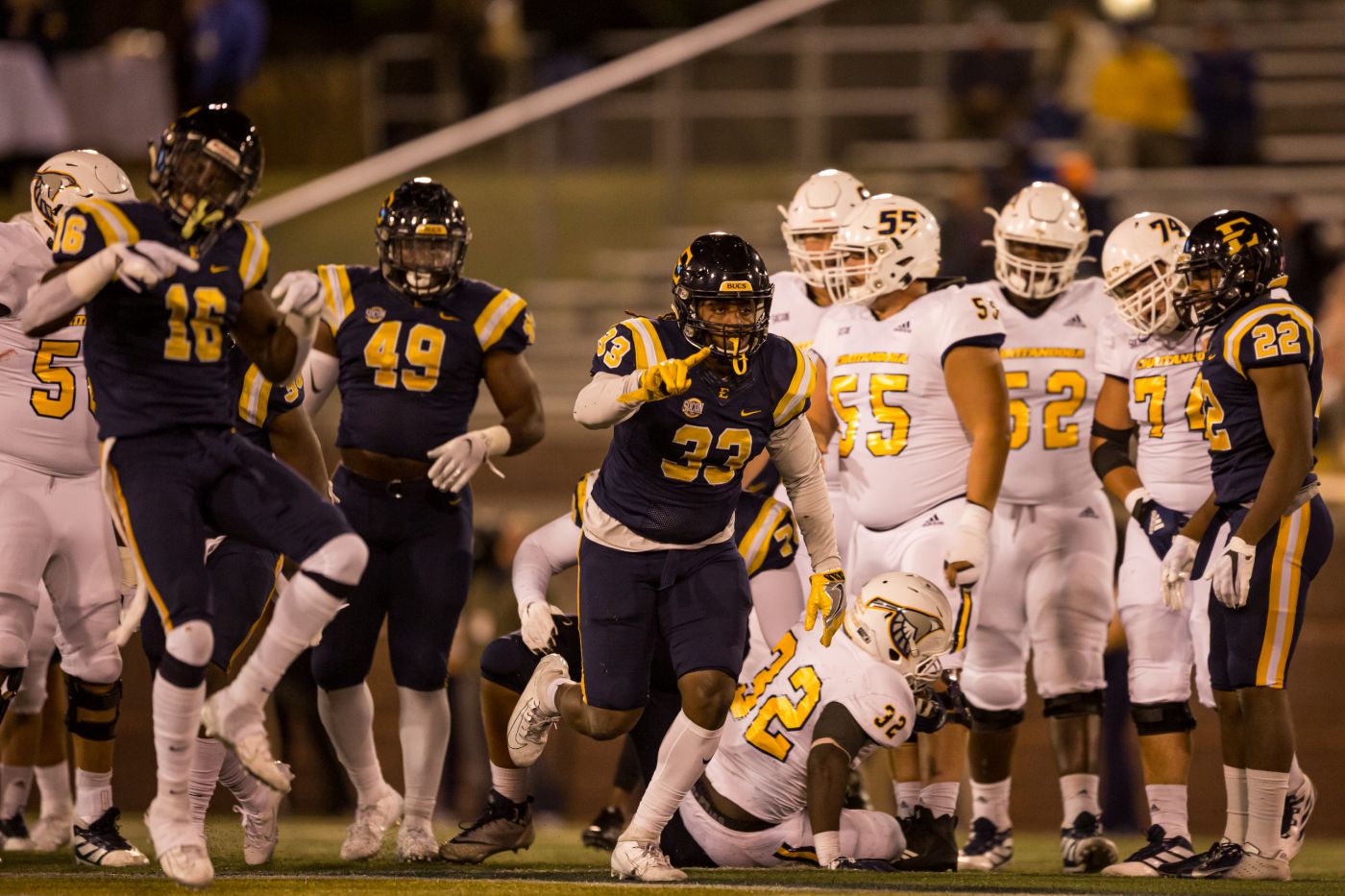 BIRMINGHAM, Ala. (Oct. 25, 2019) – The ETSU Buccaneers football team will hit the road for the fifth Southern Conference showdown of the season, this time squaring off with Samford in Birmingham, Ala. Kickoff between the two squads will be 1:05 p.m. ET as ETSU looks for its first win in Birmingham in program history.

This is SportsCenter
Will Huzzie had the catch that sent social media in a frenzy on Thursday night in Chattanooga, Tenn. Following ETSU recovering a fumble, the Bucs went on the move three plays later with a touchdown pass to the goal line. Trey Mitchell sent the ball flying over the defender’s head to where only one man could grab it...Huzzie. The redshirt-freshman wide receiver leapt up while being grabbed the Mocs’ defender. Huzzie extended his hand up in the air and over his shoulder, doing his best Odell Beckham Jr. impression. Huzzie hauled in the catch and sent the stadium in a frenzy despite being on the road. Huzzie’s catch was found on SportsCenter as the top play in the daily Top 10 countdown. The reception was also the opening talking point on Scott Van Pelt’s show as the “greatest thing I saw tonight”.

Huzzah Huzzie
Not only did Huzzie appear all over SportsCenter and all over social media with his OBJ-type catch, the redshirt-freshman also turned in a career performance against Chattanooga. Coming in to the game with just two catches for 38 yards on the season, Huzzie put on a display in front of the Mocs. The Georgia native finished the game with six receptions for 75 yards and his first collegiate touchdown. Huzzie now ranks fifth on the squad in receiving yards with 113 and eighth in receptions with eight.

Series History
ETSU and Samford do not have a long extensive history like most would think being Southern Conference foes. The Bulldogs competed in the Ohio Valley Conference prior to ETSU dropping football following the 2003 season. ETSU is 1-5 all-time when squaring off against the Bulldogs, picking up the 15-14 win over then-ranked No. 18 Samford on Nov. 19, 2016. ETSU will have its hands full as the Bucs have not defeated the Bulldogs in Birmingham, Ala. in program history. The Bulldogs are 3-4 on the season, having dropped two consecutive games following a three-game winning streak. Samford is led by quarterback Chris Oladokun, USF transfer, with 15 passing touchdowns on the season.

Silencing Samford
Samford holds a 3-4 overall record and 2-2 in SoCon play heading into tomorrow’s tilt in Birmingham. The Bulldogs began the season with back-to-back losses before rattling off three consecutive wins. Since then, Samford has dropped a pair of SoCon games, falling to Furman (58-14) and VMI (48-41).

The Bulldogs are led offensively by South Florida transfer Chris Oladokun, completing 112-of-175 for 1,585 yards and 15 touchdowns. Oladokun has also provided a spark in the running game rushing for 350 yards and a team-best six touchdowns on 72 attempts. The Bulldogs possess the SoCon’s highest scoring offense averaging 38.9 points per game. Samford likes to score and score quick, holding on to the ball for just 21:55 of each game.

The lack of possession time could be the reason why the Bulldogs also possess the league’s most vulnerable defense, allowing 42.9 points per outing. The Bulldogs have forced only five turnovers on the defensive side of the ball, including a trio of interceptions. Samford’s John Staton leads the conference with 82 tackles on the campaign, ranking fifth in all of FCS football.