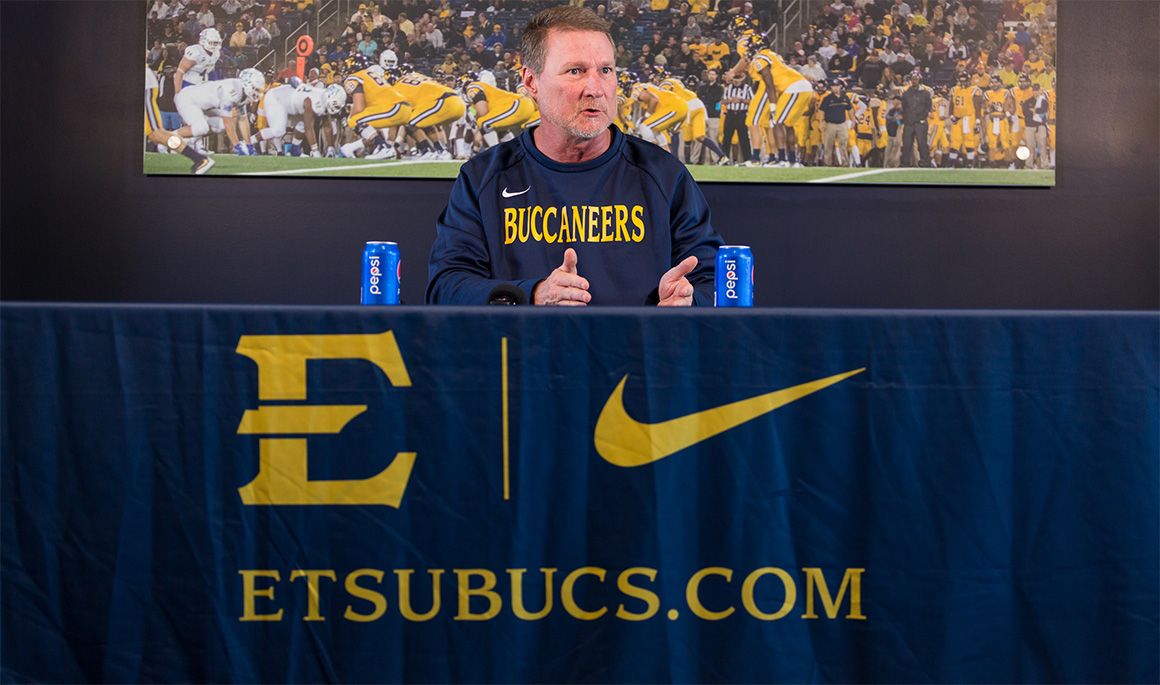 JOHNSON CITY, Tenn. (Oct. 28, 2019) – ETSU football met the media on Monday afternoon for the ninth media luncheon of the year where they discussed the Bucs’ heart breaker at Samford as well as the upcoming Homecoming showdown with The Citadel on Saturday, Nov. 2 at 3:30 p.m. (ET) at William B. Greene, Jr. Stadium.

Below are comments from Coach Sanders, Yancey and Shorts:

Head Coach Randy Sanders
On frustrations after the loss at Samford:
“I felt like the game was truly there for us. Not that we haven't had opportunities against, VMI or against Furman, Wofford or Chattanooga or whatever, but that game was truly there for us to take control of. We just never took control of it. That was probably the thing that was the most frustrating to me is that we weren't able to just take it. I felt like that opportunity was truly there, for a number of reasons, which I don't really want to get into right now, but it was there for us and we just weren't able to take it. And that was what caused that reaction from me.”

Being able to play back at home:
“It's obviously nice to be home. Our home crowd has been awesome this year and they have been very supportive. They've been all the way behind us and obviously we still need that. Our team's still playing hard. The results haven't been what we wanted, obviously, but the team's playing hard and I hope the fans will show up and support these guys. They deserve the support.”

Is the writing just not in the books this year?:
“I can't tell you that that did not go through my mind. Wow, what a time for it just to start pouring. But, so what, now what? It happened, let's go. Samford does a great job pooch-punting that ball and giving it to us at the five-yard line and now we've got to go 95 yards. We have to score a touchdown. It starts raining, the wind starts blowing, and I've been waiting all year for an opportunity to go out and practice in the rain, and we have not had one single opportunity to go out and practice in the rain all year. Now we've done wet ball. We've tried to simulate it, but it's never the same until you actually do it. We've had one of those years where we haven't had a rainy day. So, all those things entered my mind briefly between everything else. However, we had a job to do. Samford got the job done and we didn't. Basically, what it comes down to.”

How fine is that line between winning and losing:
“It's a fine line, and we're close. I told the team and hopefully they listened, keep believing. You can't stop believing, because it's right there. We all have to look at ourselves and what can we do better? I asked them if they are going to look around and try to point fingers and say, "Well, it's his fault. It's his fault. It's his fault. It's coaches," whatever it is. Mature guys are going to look within and say, "All right, what can I do better? Doesn't matter what it is, what can I do better? Where can I improve?" That goes from guys you're going to hear from, to the freshmen on the team, to all the coaches and myself, because Lord knows I've looked at myself and what could I do better? How can I handle the team differently? What can I say differently to them when we have team meetings? What do I need to say differently at halftime? When you're winning, you try to do the same things, but when you lose, boy it's hard not to beat yourself up over things. When you're winning, you're always trying to improve. When you're losing, you're trying to improve, but you can't beat yourself up. You have to keep believing, keep going, keep trusting the process, and believe good things will happen. Our goal right now is to go on a four-game winning streak and finish this thing out right.”

On stopping The Citadel this weekend:
“Stopping this team takes a lot of discipline by a number of people. Guys have to have great eye discipline. I say it all the time, but they have to do their job. If you're responsible for the dive, you better take the dive. If you're responsible for the quarterback, you better take quarterback. If you have pitch, don't get caught nosing around there on the quarterback, go play pitch. So that's critical defensively. Now offensively, we have to understand that you're probably not going to get the ball 12, 13, or 14 times. You're probably going to get it 7 or 8, so you better take advantage of those opportunities. It's not a high possession game. They're going to try to shorten the game, shorten the possessions, try to take advantage of what they do. We have to take advantage of ours. It's no different than Wofford. That wasn't a big possession game and we didn't have the ball too many times. Defensively we did a great job last year. We stopped them a couple of times on fourth down, created some opportunities. I know we had a pick six, there late in the game. If you can create some turnovers, get some stops like that, it can put them behind the eight ball because they throw the ball okay, but that's not their forte. They want to run that three-back offense. Defense has to be really disciplined. Offense has to take advantage of the opportunities, and it takes a total team effort to beat the team like this running that style offense.”

Linebacker Zack Yancey
Is it tough to stay motivated when you are losing:
“I mean, it depends on the individual. Me, myself, I'm just going to continue to work, but it's up to people like me and Tre’mond just to keep those guys up, continue to motivate them to continue to work. We have to lead by example.”

On leadership, how do you motivate those around you:
“I'm different from a lot of the players out there in that I really don't talk this much. So, what I just do, I just work. Hopefully the players just looking at me during practice, just running full speed, sideline to sideline. That's the way I lead, I don't do too much talking. I just use my actions.”

On staying disciplined against The Citadel’s offense:
“One thing for sure, it's going to be tough. You have to sit back and be patient. Any three-back team is really tough. As linebackers and secondary you just have to be disciplined. We all need to do our jobs and we will be okay.”

Offensive lineman Tre’mond Shorts
On keeping the faith moving forward:
“We have to keep believing in each other, and fighting, stringing together drives in offense, get stops on defense. You look at every game, we're so close. Every game, it's a couple plays here, a couple plays there. Like Coach Sanders said, we just have to finish and keep fighting.”

On falling to top-tier teams in the league:
“It is really tough just knowing that we almost there and a couple plays away from winning that game. You see that they're leading in league and stuff and it's very tough to see. We have been in just about every game we have played.”

On pressure to score against The Citadel:
“I won't say it's pressure, but it's all about staying focused like Zack said. Go out there and make sure that each drive counts, because you're not going to get that many the way that they run the offense. So, you're not going to get the ball. You'll probably see the ball what, every 10 minutes. So, you'll be on the sideline for a long time, because they run the ball and run the clock out. So, we need to make every possession count. I feel like every game you have to come with some energy. This game especially when you're not getting the ball as much, and you just got to stay behind the defense, get them off the field, just encourage your guys.”