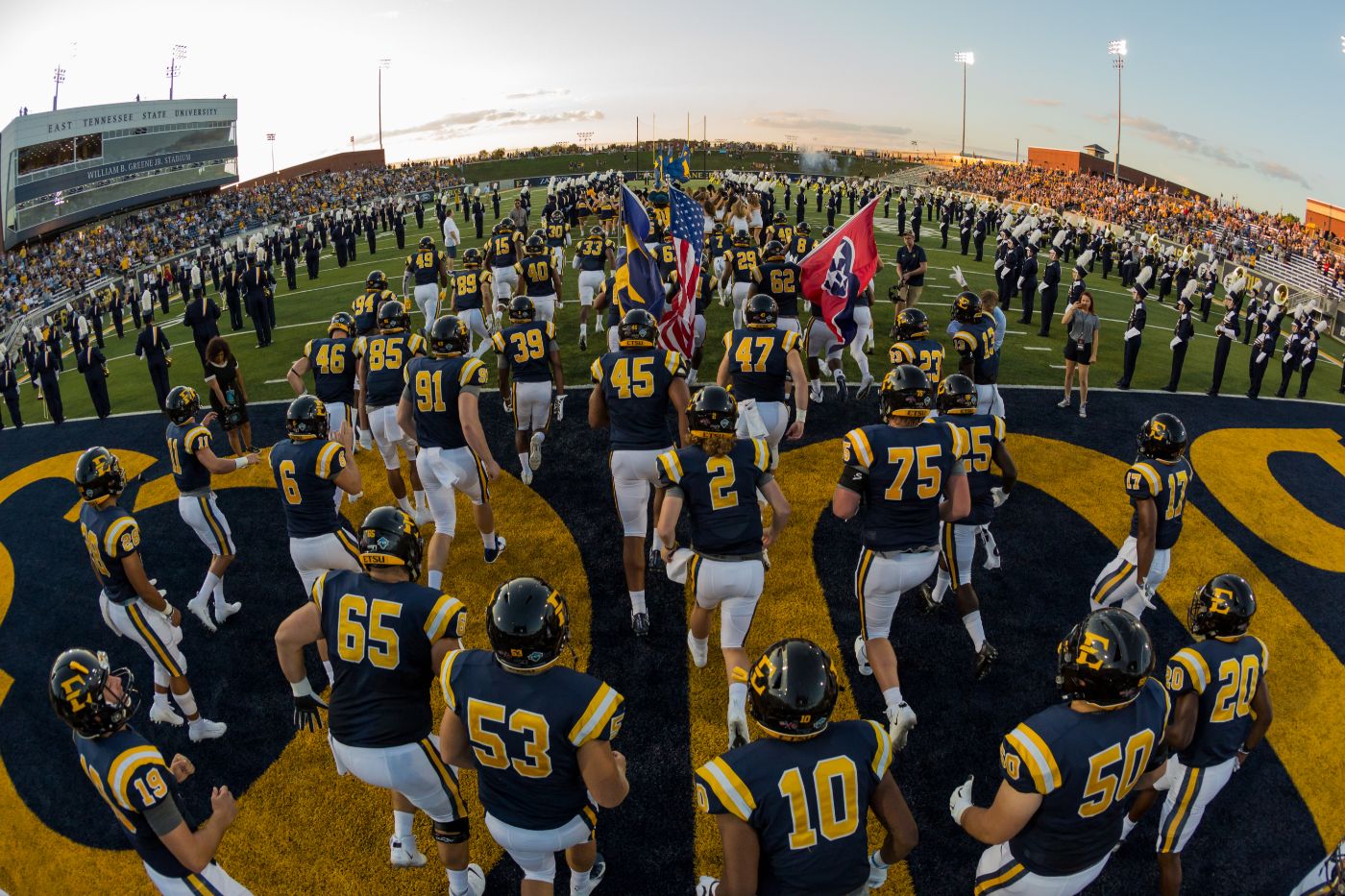 JOHNSON CITY, Tenn. (Nov. 1, 2019) – The ETSU Buccaneers enter the final third of the schedule beginning with a showdown against The Citadel on Saturday, Nov. 2 at 3:30 p.m. Saturday’s showdown at William B. Greene, Jr. Stadium will serve as the homecoming game for the Blue & Gold.

Holmes Coming
Quay Holmes continues to lead the Bucs in rushing yards, accounting for 592 yards on the ground and averaging 74.0 yards per game. Holmes is most recently coming off a game where he rushed for 95 yards on 15 carries, while also pulling in four catches for 42 yards. Holmes also accounted for 123 kick return yards, including a game-long of 40 yards. The Georgia native had a game-high 41-yard rush as he plowed through defenders, carrying the ball all the way down to the three-yard line of the Bulldogs. Holmes has been a man on a mission this year, ranking 8th in all of FCS football in all-purpose yards, averaging 145.0 per game.

Now This is Art
Artevius Smith was most recently named Southern Conference Defensive Player of the Week for his performance at Samford on Saturday, Oct. 26. Smith finished the game with his second career double-digit tackling performance, finishing second on the team with 10 tackles. Smith also finished the game with one interception, picking the deflected ball off in the endzone prior to the conclusion of the first quarter. The interception gave Smith his fourth pick of the season, all coming in the last five games. Smith leads the Southern Conference in total interceptions (4), while also ranking eighth in all of FCS football in said category and ranking eighth in the FCS in interceptions per game (0.5). Smith has now claimed two SoCon Defensive Player of the Week honors this season, also doing so on Sept. 30 for his performance against Furman where he forced one fumble and also came away with an interception.

On this Date
ETSU is 3-3 all-time when playing on Nov. 2. The Bucs’ first game on Nov. 2 arrived in 1963 when ETSU upended Morehead State on the road, 22-9. The Bucs’ lone home game on Nov. 2 was in 1974 when the Blue & Gold defeated Tennessee Tech by the final score of 13-0. The Bucs’ most recent game on Nov. 2 was in 2002, a road loss to Georgia Southern by the final score of 25-0. Prior to that game, the Bucs defeated Georgia Southern on Nov. 2, 1996 by the score of 17-14. ETSU has played a seventh game on this date, a game that did not count in the overall records. The Bucs dropped a 23-20 decision to the Quantico Marines at the Marine Base in Virginia. The Quantico Marines began their first season of football in 1919 and later disbanned the program in 1972.

Note the Similarities
Despite a 2-6 overall record, the numbers between Trey Mitchell and former ETSU quarterback Austin Herink are uncanny. Herink had a slow start to his senior season, however the Bucs were able to walk away victorious in the close games. Up to this point this season, Mitchell has a passing efficiency rating of 116.7 and has completed 58 percent of his passes. Mitchell has also thrown for eight touchdowns and five interceptions, while throwing a season-long 57 yard pass earlier in the season. Now rewind to last season at this point for Herink. The Tennessee native at this point last season had a passing efficiency rating of 118.6 and completed 59 percent of his passes. At this time last season, the captain had thrown six touchdowns and eight interceptions, while hurling a season-long of 54 yards in pass. At this rate, Mitchell is on pace to throw for just six more yards than Herink by the end of the season

Series History
This will be the 28th all-time meeting between ETSU and The Citadel. The Bucs hold a 16-11 advantage in the all-time series, most recently defeating the Bulldogs 26-23 in Charleston, S.C. on Oct. 13, 2018. ETSU is 1-2 against The Citadel since the return of football and are 9-4 when playing the game in Johnson City, Tenn. The Bulldogs arrive to ETSU riding a three-game winning streak, most recently coming off a 35-24 win over Mercer where they possessed the ball for just over 37 minutes of the game. The Bulldogs are seeking their first winning season since finishing 10-2 in 2016. Quarterback Brandon Rainey has accounted for a single-season program record 23 touchdowns. The Bulldogs also possess the second-best rushing defense in the league, recently holding Mercer to just 61 yards on the ground.

Clashing with the Citadel
The Citadel leads the conference in time of possession, holding the ball for 37 minutes of each game. The Bulldogs enter the weekend on a three-game winning streak, currently sitting at 5-4 overall and 3-2 in league play.

Brandon Rainey leads the offense for The Citadel, accounting for a program-record 23 touchdowns this season. Rainey is the leading passer and leading rusher in the triple option offense for the Bulldogs. The Georgia junior has rushed for 718 yards and four touchdowns, while throwing for nine touchdowns on 688 yards.

One does not simply talk about The Citadel without mentioning the defense as well. The Bulldogs possess the top rushing defense in the league, holding opponents to just 148.7 yards per game. The Citadel is led by Willie Eubanks III in tackles with 81 tackles, two forced fumbles and one fumble recovery and interception. The Bulldogs held Mercer to just 61 yards rushing on Saturday, including nine yards in the second half.

Coverage
Saturday’s game will also be broadcast on ESPN3/Nexstar with the team of Pete Yanity (play-by-play) and Jared Singleton (color) providing the call.