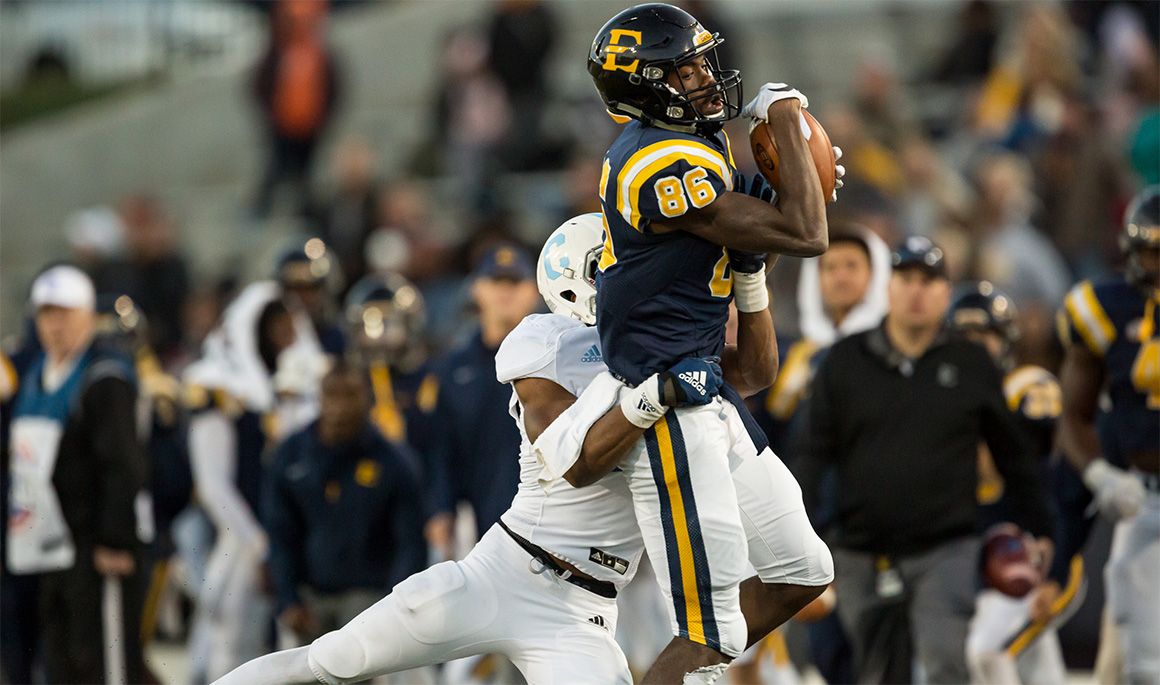 JOHNSON CITY, Tenn. (Nov. 2, 2019) – The ETSU Buccaneers saw another victory slip from their hands late in the fourth quarter as the Blue & Gold fell to The Citadel, 31-27. ETSU made one final push after falling behind for the first time in the game and came up one-yard short of the endzone in their final drive. Following the loss, ETSU drops to 2-7 on the season and 0-6 in league play. The Bulldogs improved to 6-4, including 4-2 in Southern Conference action.

The Bucs put seven points on the board in their opening drive for the first time this season as Trey Mitchell (Knoxville, Tenn.) found Will Huzzie (Duluth, Ga.) on a route across the middle for the 59-yard touchdown reception. The 59-yard pass and catch set career longs for both players and the second career touchdown reception from Huzzie.

The Citadel answered back on their first possession of the game as Brandon Rainey punched the ball in from one-yard out to even the score at seven apiece. All 78 yards on the scoring drive for the Bulldogs came via the ground game.

ETSU outscored the Bulldogs 6-3 in the final 21:51 of the opening half as Tyler Keltner (Tallahassee, Fla.) connected on a pair of field goals, one from 35 yards out and a chip shot from 21 yards away. The Citadel’s Jacob Godek booted a 21-yard field goal through the uprights himself to trim the ETSU lead to 13-10 before halftime.

The Bucs scored on their first drive of the second half as the defense forced a three-and-out and ETSU’s Malik McGue (Johnson City, Tenn.) returned a punt 13 yards to The Citadel 31-yard line. A critical three-yard rush on 4th-and-1 from Mitchell kept the drive alive for the Bucs, who then scored five plays later as Mitchell found Anthony Spagnoletti (Bealeton, Va.) in the left corner of the endzone for the 20-10 advantage.

After The Citadel used just five plays to punch the ball into the endzone to trim the ETSU lead back to three, the Bucs went back to work on a 13-play, 75-yard scoring drive that ate 6:43 off the clock. The drive was led by 57 combined rushing yards from Quay Holmes (Powder Springs, Ga.) and Jacob Saylors (Jasper, Tenn.). Mitchell capped the drive off with his third passing touchdown of the game, finding Jawan Martin (Decatur, Tenn.) wide open from two yards out to put ETSU back on top 27-17.

However, the Bulldogs would not go away as Rainey found the endzone for the second time in the game with a 1-yard rush to pull The Citadel back within three following a 10-play, 65-yard drive. The Bucs were forced to punt on their next drive after Mitchell’s pass slipped through the hands of Keith Coffee (Miami, Fla.) deep into The Citadel territory on third down. Two plays after the punt, Rainey found Raleigh Webb for the go-ahead score on a 73-yard touchdown pass, the first lead for the Bulldogs and final lead change of the game.

ETSU made one final push on its final drive of the game after Mitchell found Huzzie for a 34-yard catch and Coffee two plays later with a 28-yard reception down to the Bulldogs’ 6-yard line. Following three consecutive incompletions, Mitchell found Nate Adkins (Knoxville, Tenn) at the goal line on fourth down. However, The Citadel defenders kept Adkins from stretching across the pylons, holding the Bucs to one-yard short of the go-ahead drive.

NEXT GAME UP
ETSU will travel to Cullowhee, N.C. on Saturday, Nov. 9 for the Bucs next Southern Conference game. Kickoff at E.J. Whitmire Stadium has been scheduled for 3:30 p.m.