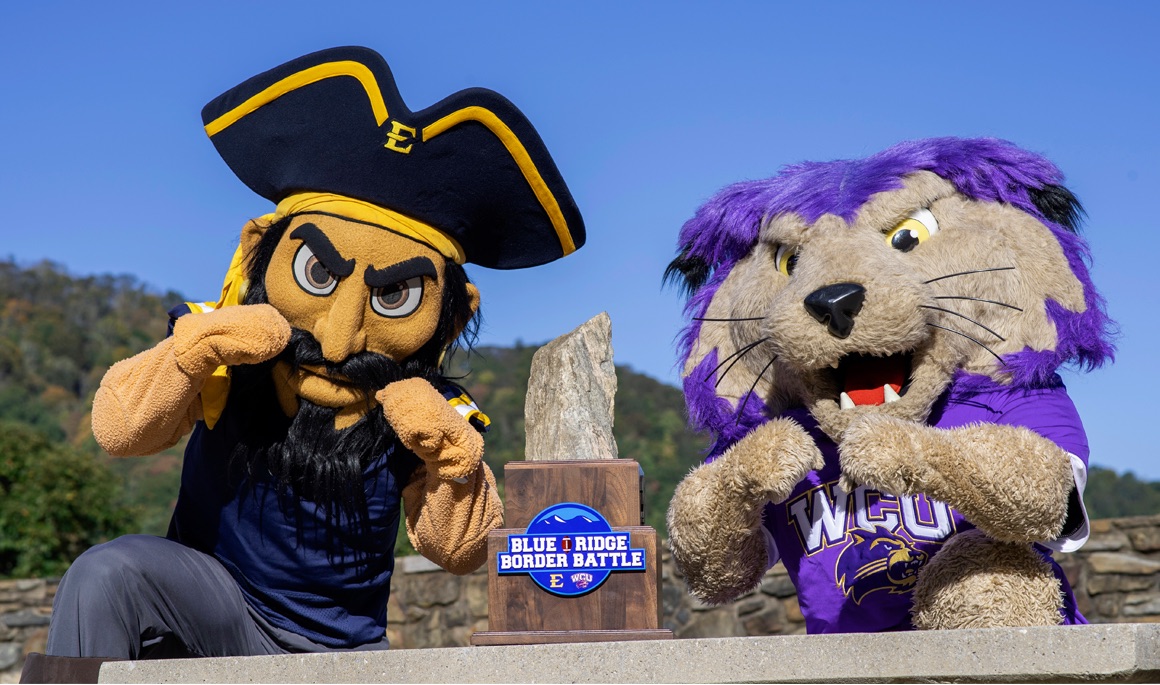 JOHNSON CITY, Tenn. (Nov. 8, 2019) – The ETSU Buccaneers are set for the final road Southern Conference showdown of the season as ETSU travels over the mountain to Cullowhee, N.C. to take on Western Carolina on Saturday, Nov. 9. The two squads will compete for the Blue Ridge Border Battle Trophy and will jump start the game with a 3:35 p.m. kickoff at E.J. Whitmire Stadium.

ETSU and Western Carolina will square off in the second edition of the Blue Ridge Border Battle with the Bucs traveling to Cullowhee with the trophy on the bus following the victory in the first-ever edition of the trophy in 2018. The Bucs fended off Western Carolina in triple overtime, 45-43, winning the trophy at William B. Greene, Jr. Stadium a season ago. Both public universities come from similar beginnings and share similar missions to serve their mountain communities. The two campuses are separated by just 112 total miles and share a common border through the Blue Ridge Mountains.

In 2018 the mountain-rivalry was dubbed as the “Blue Ridge Border Battle”, consisting of a trophy that includes a two-tiered wooden pedestal adorned on opposite sides by the two school’s respective logos and the moniker of the football rivalry series. Atop the trophy is a rock that was taken from the Appalachian Trail on the North Carolina – Tennessee border in the heart of the Great Smoky and Blue Ridge mountains.

Oh Captains, My Captains
ETSU Head Coach Randy Sanders has tabbed a trio of captains for the final three games of the 2019 regular season. Redshirt-senior offensive lineman Ben Blackmon, redshirt-senior defensive lineman Nasir Player and redshirt-senior defensive back Artevius Smith were tabbed as the Buccaneer captains moving forward. This is the second consecutive season that Nasir Player was labeled a permanent captain, while marking the first opportunity for Blackmon and Smith. Blackmon is the vocal leader on the ETSU offensive line and has appeared and started in 44 games for the Blue & Gold. Blackmon transitioned from left guard to center in the offseason, further showcasing his leadership abilities. Smith leads the Bucs defensively with 66 tackles and four interceptions and is seen as the energetic player in the ETSU secondary, firing up his teammates at every break.

Emergence of Huzzie
Will Huzzie has taken the last three weeks in stride for the redshirt-freshman wide receiver. Coming into the bye week following a 35-17 loss to Wofford, Huzzie had accounted for only two catches for 38 yards. Since then, the Georgia native has tallied 17 catches for 262 yards and two touchdowns in a span of three weeks. On top of that, Huzzie has also appeared on SportsCenter for the No. 1play in the Top 10 countdown following his best Odell Beckham Jr. impression with a one-handed touchdown snag against Chattanooga. Most recently, Huzzie recorded a career-best seven catches for a career-high 143 yards that also featured a career-best 59-yard reception. Huzzie has been doing it all lately for the Bucs, accounting for 89.5 percent of his catches in the last three weeks, as well as 87.3 percent of his receiving yards and 100 percent of his touchdowns. Huzzie’s 143-yard receiving game on Saturday marked the first time since the 2018 season opener against Mars Hill that an ETSU receiver eclipsed the century mark in receiving yards.

Running Free
The Bucs eclipsed 200 yards rushing for the third time this season on Saturday against The Citadel and first since recording 207 against VMI. ETSU rushed for 224 yards against the Bulldogs, led by a career-high performance from Quay Holmes with 120 yards. Jacob Saylors rushed for 85 yards in the contest to join Holmes in the push. Holmes has now rushed for 712 yards on the season and two scores. Holmes and Huzzie went over 100 yards rushing and receiving to mark the first time since Sept. 1, 2018 that the Bucs saw a running back rush for over 100 yards and receiver catch for 100 yards in the same contest.

Clipping the Claws
This will be the 49th all-time meeting between ETSU and Western Carolina. The Bucs trail Western Carolina 23-24-1 in the all-time series, most recently besting the Catamounts in triple overtime on Oct. 27, 2018 by the final score of 45-43. The Bucs are 11-12 all-time when playing in Cullowhee, N.C. with the last win in Cullowhee coming in 2002 by the final score of 27-7. The longest winning streak for either side in the series was when WCU rattled off seven straight victories from 1982-88. Both squads have scored a program-best 49 points in the series, with the Catamounts reaching that mark in 2017. The Catamounts are 2-7 on the season, including 1-5 in league play with a 43- 35 victory over VMI on Saturday. Tyrie Adams, SoCon Preseason Offensive Player of the Year, is the leader on the squad and is a dual-threat quarterback for the Catamounts, throwing for 1,219 yards and nine touchdowns, while rushing for a team-best five touchdowns. The Catamounts possess the eighth-ranked defense in the league, surrendering 38.7 points per game.

Coverage
Saturday’s game will also be broadcast on ESPN+/Nexstar with the team of Pete Yanity (play-by-play) and Jay Sonnhalter (color) providing the call.