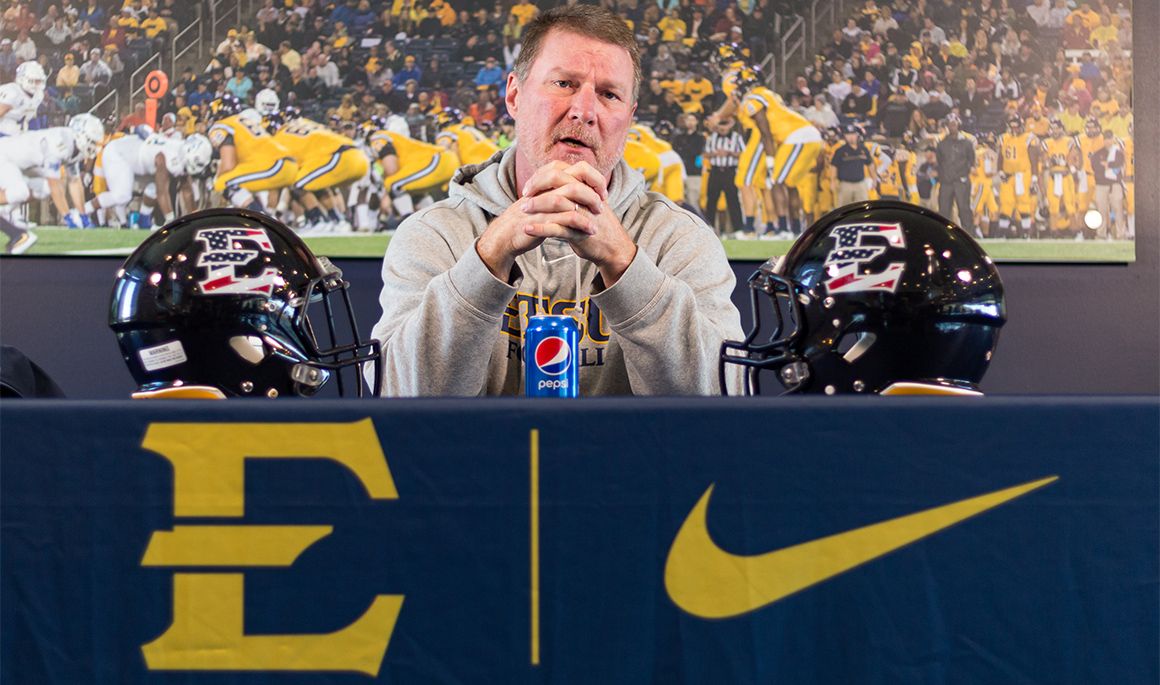 JOHNSON CITY, Tenn. (Nov. 11, 2019) – ETSU football met the media on Monday afternoon for the 11th installment of the media luncheons where they discussed the Bucs’ overtime loss at Western Carolina on Saturday and the upcoming Senior Day/Heroes Day matchup with Mercer on Saturday, Nov. 16. Kickoff at William B. Greene, Jr. Stadium is set for 1 p.m.

Head coach Randy Sanders and the team captains joined the media for the luncheon. Those captains are Ben Blackmon (Newberry, S.C.), Nasir Player (Columbia, S.C.) and Artevius Smith (Birmingham, Ala.).

Below are comments from Coach Sanders, Blackmon, Player and Smith:

Head Coach Randy Sanders
How do you feel about the team’s effort right now:
“Our team plays hard and the effort is there. I think sometime our attention to detail is lacking, just doing it every single play. If one guy has a little miscue here, his attention to detail is lacking, and the next play, this guy and then next play this guy. It doesn't take a lot to mess you up, but rarely do you get away with it. You can't ever assume that you're going to get away with things. It's just a lot of little things, but if you take the little things and you don't take care of them, they become big things. Playing hard, playing with a lot of effort. The intensity's there, but we've got to have the focus and the attention to detail. That's what separates great players from average players, usually. It's not ability. It's doing the little details well and consistently. That's what separates the good teams from the great teams. The teams that take care of the details well and do them consistently, those become the good football teams.”

Do you feel like you have building blocks like Holmes to build a team around:
“Quay is a great example but I don't think he is the only example we have on this team. Obviously, the season hasn't gone as we wanted. It hasn't gone as we worked for or prepared for or even had in our mind going in. To keep fighting the resiliency of this team, the character of this team, the integrity of this team, the pride in that group that was on the sideline Saturday out there playing. Just to keep fighting because we made enough mistakes there in the first half. We get a touchdown called back by the penalty. We have them in fourth down and they review it, find out the chains aren't right and suddenly they got a first down. They go on down to score. We don't get a punt off. We have a poor snap, poor hold, whatever happened on the field goal that we don't get points out of and all those things happened in the first half, but just to keep playing and keep playing the next play, keep fighting, and keep competing, I think speaks volumes for the character of the team. Quay is a great example of it, but there's more than just Quay Holmes. Try to push those guys that are doing that towards the forefront and make them the examples that we have.”

What were your thoughts and feelings in last year’s SoCon-clinching win at Mercer:
“Amazing. I went back and watched that game this morning just to see, as much as anything, some of their personnel. They've got a different defensive coordinator. Both teams are different right now than we were at that time, but just to see some of the match ups, how we won down there. How we did some of the things we did with some of the things you see on film is amazing. That was obviously a good memory. I'm sure Mercer's angry. I'm sure they want to come up here and seek revenge for not only last year, but the last two years, losing up here the way they did in overtime two years ago. So, it's going to be a challenge. Every game's a challenge, especially the way that the last six games have gone, just to keep persevering and keep fighting back. It's not easy to just keep putting your pads on and go out there and competing as hard as our guys are doing. I'm really proud for how hard they are competing.”

How do you feel Mercer has done going from Riddle to Riley at quarterback:
“They've had a quarterback change, but they also went to a guy that was the offensive rookie of the conference two years ago. So it's not like the cupboard was bare for them. Losing Riddle hurts and he was an outstanding player and had done a really good job for them. However, it's not like they've fallen upon really, really hard times there. They had a really capable backup who's come in and played well, giving it to that big running back, and he's making yards. Their offensive line is playing well. They have some receivers that are pretty dynamic outside. A receiver like Durden who's obviously a playmaker if you've got a 98-yard kickoff return and an 88-yard kickoff return. He's a dynamic guy with the ball in his hands. It makes it a whole lot easier to play quarterback when you have a 240 pound back that you can hand it to and then some guys outside that can make plays.”

Offensive lineman Ben Blackmon
How do you feel the team is able to keep going right now:
“Just how close we are to winning. It's not like we're getting blown out every week. We're one play or two away from winning. We just need to keep grinding, keep telling ourselves we're right there, and then it makes it a lot easier. Keeps us fighting because we're right there and so close to winning.”

Do you feel like the team missed its opportunities against WCU:
“Defense set us up with some good field position. We capitalized a few times. But then there were a few times where we didn't, and that just falls on us. When we get those opportunities, we need to take advantage of them and we didn't Saturday in certain situations and that hurts. That was the difference in the game. That's on us.”

Being a senior, what has been your best memory at ETSU:
“Where we started when we came in to where it is when we leave. We have all this stuff that whenever we got here, it was just drawings and a dream and now it's all here. From playing at Science Hill to this, what we have is crazy. To know that we built it from that to where it is now is a great feeling.”

Defensive lineman Nasir Player
Have you thought about Saturday being your final game at home:
“I haven't really thought about it yet. I mean, I know it's going to be emotional, but it hasn't hit me yet. So, I think it'll hit me on that day. It's been a long four years and we all came in the same recruiting class and stuff, and we got here and when there was no stadium, there was nothing, none of that. So, it's just going to be surreal to know what it was when we first got here, and to just look around like this is the last time we're going to play in William B. Greene, Jr. Stadium.”

What are your thoughts on missed opportunities on Saturday:
“It is not just the offense. Everybody that was on that field had a miscue at some point in the game. So, no matter what time, no matter when it was or how it happened, everybody had a miscue. I mean, it's on everybody. Like coach said, we need to pay more attention to detail because you never know. The ball always finds the mistake.”

What has been your best memory here at ETSU:
“Just watching where it came from, like playing in Science Hill those first two years to now us having our own stadium. Winning the conference championship last year was special. Last year is still something to hang our hat on, we're still proud of that. We helped accomplish that, we helped build the foundation to get us to that point. I think ETSU can be the consistent championship program long after we're gone.”

Defensive back Artevius Smith
What do you feel keeps everyone going right now:
“As a team, we know that we just got to keep going and keep moving. We can't focus on the past too much. We just need to keep moving forward and just be positive.”

What has been your best memory at ETSU:
“Growing up with these guys in my class and just seeing us grow into the men that we are today. I just cherish those moments as much as I can because you don't know how long they'll last or when your last one is going to be with them.”