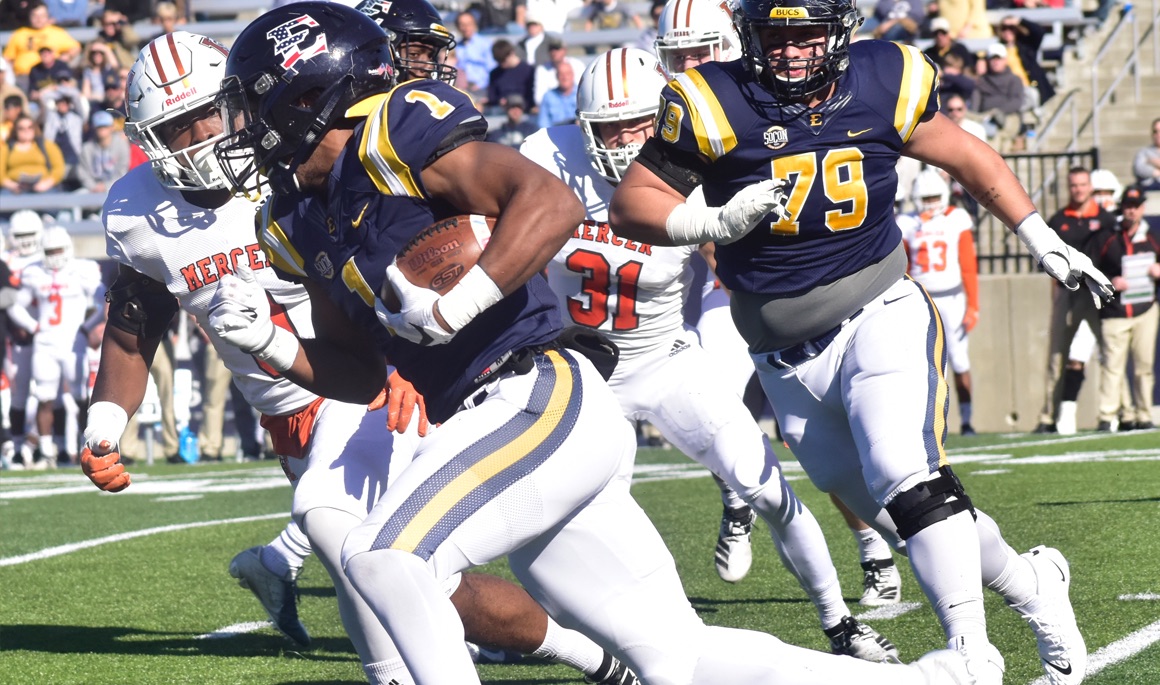 JOHNSON CITY, Tenn. (Nov. 16, 2019) – The home finale did not disappoint as ETSU held several celebrations throughout the game including: Senior Day, celebrating a 38-33 win and most notably witnessing a program rushing record set by Quay Holmes (Powder Springs, Ga.) as he scampered for 255 yards. Holmes’ 255-yard performance broke a 21-year-old record of 242 yards held by ETSU Hall of Famer, Brandon Walker.

The Bucs scored on all five possessions in the first half, jumping out to a 10-7 lead over the Bears in the first 15 minutes of play. ETSU’s first-quarter touchdown was a Jacob Saylors (Cleveland, Tenn.) 2-yard spurt to give the Blue & Gold the advantage.

After a Mercer touchdown to start the second quarter, the Bucs rattled off three consecutive touchdown drives for 21 unanswered points and a 31-14 halftime lead. Holmes accounted for two of the three touchdowns with a four-yard touchdown run and a one-yard punch into the endzone. ETSU’s final touchdown of the half came after Artevius Smith’s (Birmingham, Ala.) goal-line interception was returned to the Mercer 27-yard line. ETSU’s freshman quarterback Tyler Riddell (Tampa, Fla.) found Keith Coffee (Miami, Fla.) for a 27-yard touchdown strike on the very next play to provide the Bucs with the 17-point cushion with nine seconds left in the half.

ETSU reclaimed the 12-point advantage after Holmes found the endzone for the third time, this time a three-yard touchdown run. Holmes’ third touchdown run tied a personal best for the ETSU sophomore, recording three touchdowns in the 2018 Homecoming win over Gardner-Webb on Oct. 6.

The Bears struck again with 4:33 remaining in the game as Devezin recorded his fourth touchdown carry of the game, a seven-yard run to cap off a 10-play, 78-yard drive.

ETSU held on to the ball for the final 4:33 on the clock, rushing the ball for 60 yards to seal the win. Holmes carried the ball seven times for 60 yards on the final drive to lift the Blue & Gold to the win and soar into the record books with his 255 yards rushing.

NEXT GAME UP
ETSU will close out the 2019 regular season with a 3:30 p.m. (ET) showdown against the Commodores of Vanderbilt. The two squads will meet on the gridiron at Vanderbilt Stadium on Saturday, Nov. 23.