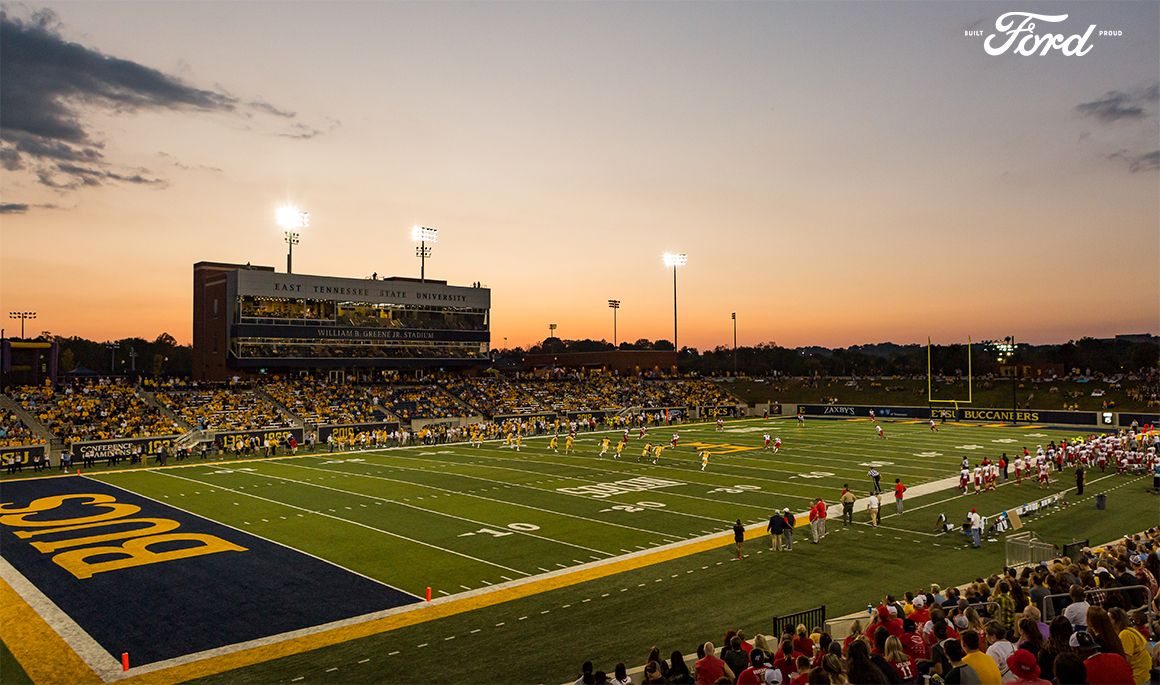 “This will be yet another challenging schedule as we head to Georgia and Austin Peay,” stated Sanders. “Not to mention the league being as deep as it is, always makes each game exciting. We are excited for the season ahead and look forward to seeing our fans fill the seats at Greene Stadium.”

BUCS TO OPEN SEASON ON FAMILIAR TURF
The Bucs will kick off the 2020 campaign on Sept. 5 when ETSU welcomes Mars Hill into town. The season opener will be played at William B. Greene, Jr. Stadium and will mark the second time in three seasons that the Bucs opened with the Lions. ETSU defeated Mars Hill, 28-7, in the season opener on Sept. 2, 2018.

NONCONFERENCE ROAD SHOWDOWNS
The final two nonconference battles for the Bucs will be on Sept. 12 and Sept. 26. The Blue & Gold will first hit the road on Sept. 12 when they travel to Athens, Ga. for a showdown with the Georgia Bulldogs for the first-ever meeting between the two squads. The final nonconference contest will be held in Clarksville, Tenn. on Sept. 26 against Austin Peay. The Bucs defeated the Governors, 20-14, on Sept. 14, 2019 and are 15-12-2 all-time against Austin Peay. The Govs made a run into the FCS Quarterfinals last season, setting up for an enticing rematch in Clarksville.

SOCON OPENER
The Bucs will open their Southern Conference action on Sept. 19 when ETSU welcomes Samford into town. The showdown with the Bulldogs will be one of five home games throughout the season, including four SoCon contests.

SOCON RIVALRIES
Both of the rivalry games for the Bucs return to Greene Stadium this season as Western Carolina comes into town on Oct. 10 for the “The Blue Ridge Border Battle” game. Three weeks later on Oct. 31, ETSU will square off with Chattanooga in the “Rail Rivalry”.

BRING YOUR FAMILIES
On Oct. 31, the Bucs will welcome the Mocs into town for the “Rail Rivalry”. ETSU will also hold Family Weekend on Halloween day at Greene Stadium.

TRAVELING IN THE CONFERENCE
The Bucs will take to the road for four SoCon games this season, beginning with The Citadel on Oct. 3. The next league road contest will be in Lexington, Va. against VMI on Oct. 24. The Bucs’ final two road showdowns of the season will be against Mercer (Nov. 7) and Wofford (Nov. 14).

REGULAR SEASON FINALE
The final game of the 2020 regular season will take place at Greene Stadium as the Bucs welcome the Paladins of Furman into town on Nov. 21. The last time these two teams met in Johnson City, the Bucs rattled off 23 unanswered points to complete a 29-27 comeback win over the Paladins, a win that helped spark ETSU into the playoffs later in the season.

OPEN WEEK
ETSU’s open week this season will be on Oct. 17, sandwiched in between a pair of league games. Following the open week, the Bucs will travel to Lexington, Va. for a showdown against VMI on Oct. 24.

GET YOUR TICKETS
Season tickets can be renewed now by calling the Buccaneer ticket office at 423-439-3878 or by visiting ETSUBucs.com.

Kickoff times will be announced at a later time.