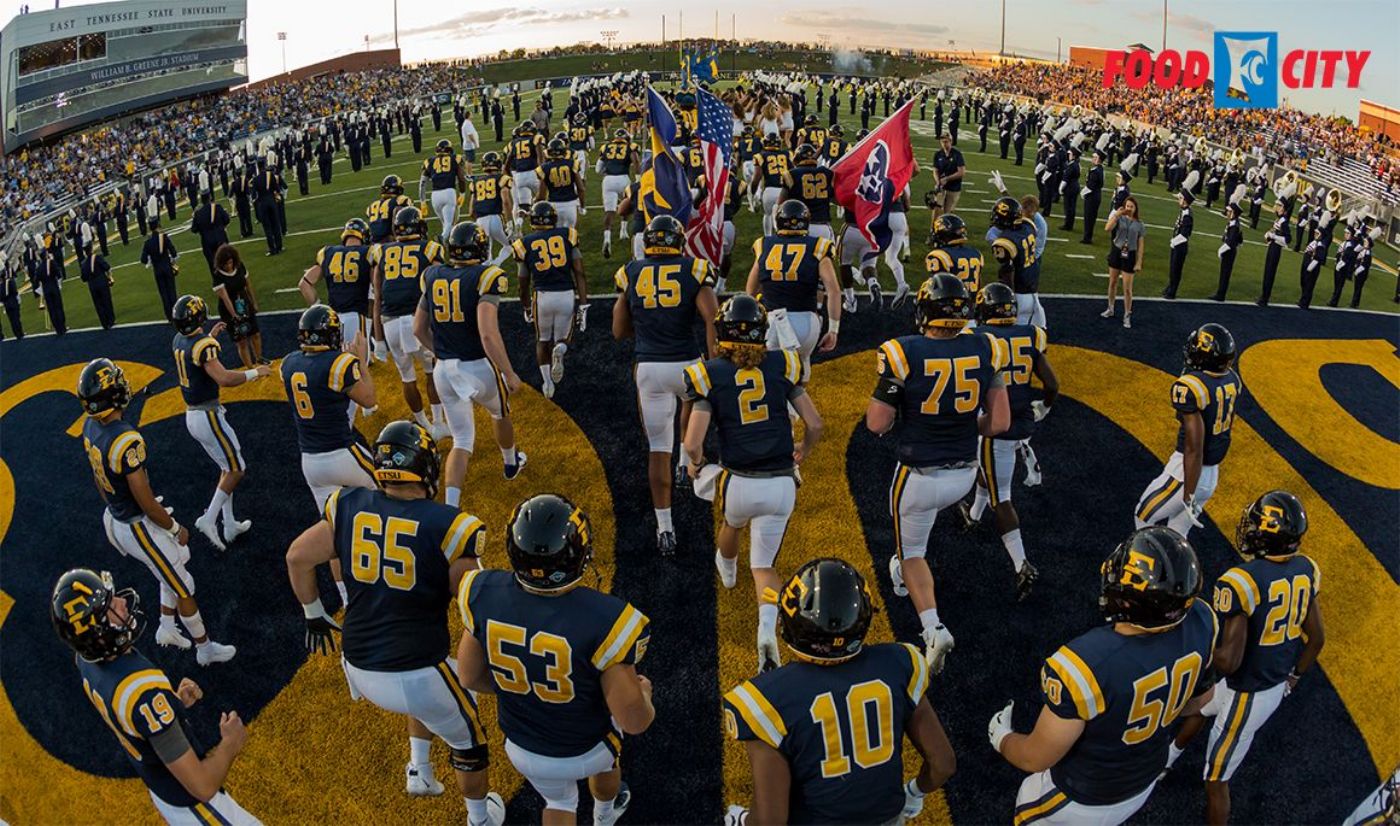 JOHNSON CITY, Tenn. (Feb. 19, 2021) – It has been 455 long days since the ETSU Football team ran onto the gridiron. At last, that wait is finally over. The Bucs will begin the rare 2021 Spring Season in front of the home crowd as the Blue & Gold hosts the Samford Bulldogs. Kickoff for the season opener is scheduled for 1:05 p.m. at William B. Greene, Jr. Stadium.

A Season to Remember
Quay Holmes provided a bright spot for the Bucs’ offense this season, rushing for 1,143 yards on the season and seven touchdowns. The 1,143 yards on the ground are the fourth-most by a single Buccaneer in ETSU history. Holmes jumped into the record book against Mercer in the final home game of the season on Nov. 16. The Georgia native carried the ball 26 times for 255 yards and three scores against the Bears as the Bucs capped off the SoCon season with a 38-33 victory. Holmes also returned 27 kickoffs for 628 yards, the fourth-most kick return yards in a single season in ETSU history. Holmes led the SoCon in all-purpose yards with 1,905. Heading into his junior season, Holmes currently ranks ninth in program history for career rushing yards (2,071) and fifth in ETSU history for yards per carry (5.0).

Defensive Juggernaut
The ETSU secondary was a strong point for the Bucs all season long in 2019. The Bucs ranked 12th in the NCAA at the FCS level for fewest passing yards allowed per game at 170.3. The Bucs also ranked second in passing defense in the Southern Conference. Returning from last year’s secondary is Tyree Robinson and Karon Delince who look to solidify the deep secondary. The Bucs also return Quinn Smith and Alijah Huzzie, while adding Mike Price (Appalachian State) and Desmond Dailey, Jr. The defense held quarterbacks in check, allowing less than 200 yards passing in nine of the 12 games in 2019. ETSU allowed Mercer’s Kaelan Riley to throw for 224 yards, becoming the first 200-yard passer since yielding 233 yards in the air to Austin Peay on Sept. 21.

Hitting the Transfer Portal
The Buccaneers reloaded with 11 transfers in the offseason, including adding five players late in the 2020 calendar year. Six of the 11 transfers arriving to Johnson City are coming from FBS programs: Charlie Cole (Army), Carson Flake (Western Kentucky), Jay Harrison (Buffalo), Austin Lewis (Liberty), Mike Price (Appalachian State) and Juwan Ross (Old Dominion). Cole, Lewis and Ross were added late in 2020, while Flake, Harrison and Price were part of the ETSU signing class in February 2020. Austin Lewis (Liberty) will be ineligible to compete this spring season due to Liberty having played football in the fall. The Bucs also added Colby Smith (Erskine) and Garrett Jennings (Eastern Kentucky). Rounding out the transfers are a trio of JUCO competitors: Timmy Dorsey (Laney College), Brock Landis (Blinn College) and Joe Schreiber (Iowa Western CC). Landis aims to step in to compete for the starting quarterback slot. Fans can also watch Dorsey on the most recent season of Netflix’s Last Chance U. Meanwhile, Schreiber looks to make an impact at the center position.

The Comfort of Greene
The Bucs boast a 66.7% winning percentage when playing games in the friendly confines of William B. Greene, Jr. Stadium. In its three years of existence, Greene Stadium has held 12 wins for the Blue & Gold, while yielding just six losses. ETSU finished 4-2 inside Greene Stadium in its first season in 2017, following that season up with a 5-1 home mark in 2018. ETSU finished 3-3 at home in 2019 with wins over Shorter, Austin Peay and Mercer for the only three wins of the season for the Bucs. In the 18 games played inside its new home, ETSU is outscoring the opposition, 511-387, holding its foes to 21.5 points per contest. The Buccaneer defense is limiting opponents to 340.1 yards per game (6,121 total yards).

Battling the Bulldogs
Samford finished the 2019 season with a 5-7 mark, including 4-4 in SoCon play. The Bulldogs found their starting quarterback in Chris Oladokun following the graduation of the league’s all-time passing leader, Devlin Hodges. Oladokun, the South Florida transfer, passed for over 2,000 yards with 18 touchdowns and rushed for 493 yards and eight scores.

Samford has finished fourth in the league in back-to-back years, including in 2019 after the Bulldogs started 2-0 in SoCon action before finishing 4-4 on the season. Samford has won three consecutive battles against ETSU. The last time these two teams met, the Bulldogs escaped with a narrow 24-17 win in Birmingham, Ala. ETSU’s lone victory over Samford was in 2016 when JJ Jerman connected on a game-winning 28-yard field goal for the 15-14 victory at Kermit Tipton Stadium in Johnson City, Tenn.

Saturday’s game will also be broadcast on ESPN+/Nexstar (ABC Tri-Cities) with the team of Pete Yanity (play-by-play) and Jared Singleton (color) on the call.