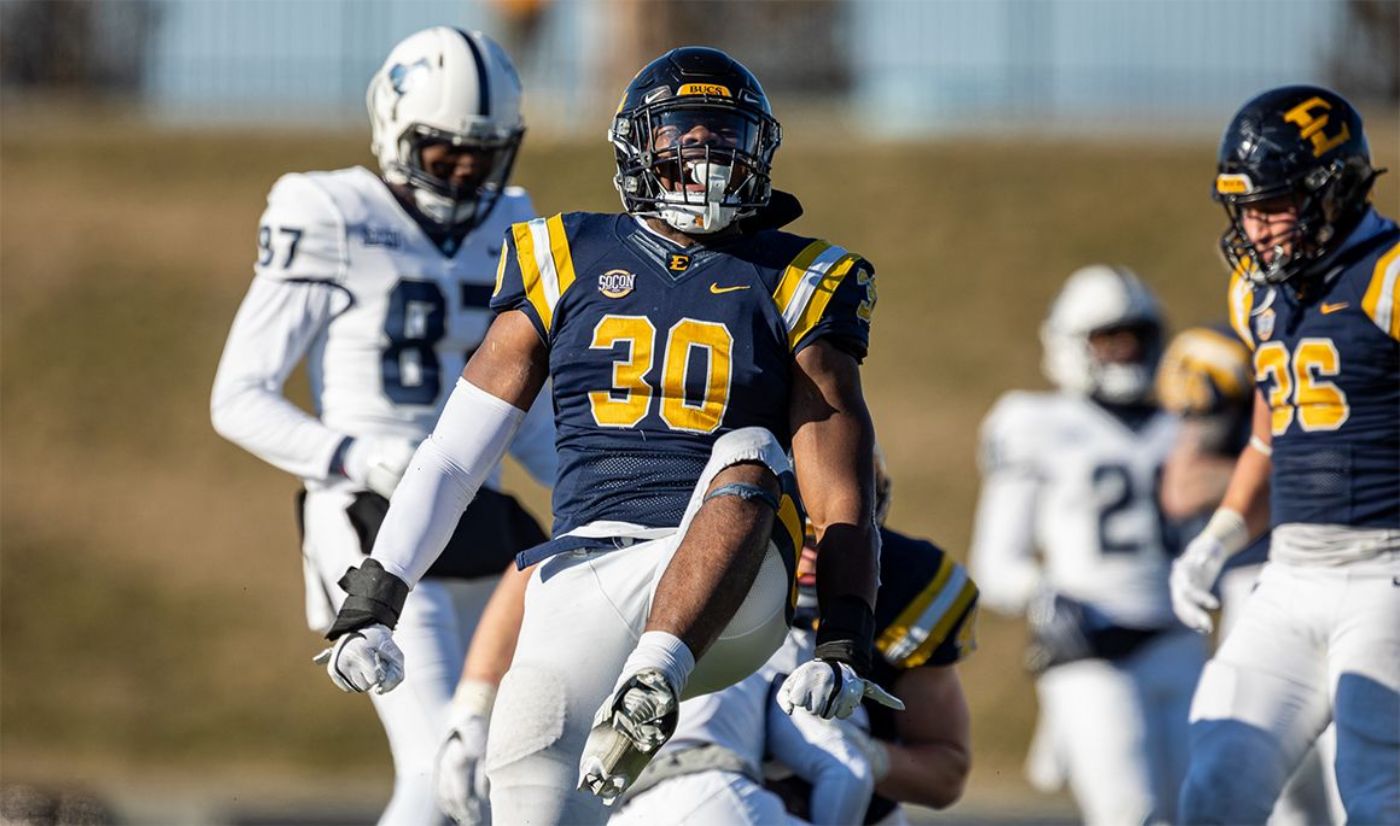 JOHNSON CITY, Tenn. (Feb. 20, 2021) – The ETSU Football team delivered quite the defensive performance in the much-anticipated season opener as ETSU toppled Samford on Saturday by the final score of 24-17. The Southern Conference battle was played at William B. Greene, Jr. Stadium in Johnson City, Tenn.

The Bucs overcame a 14-0 deficit in the first quarter, outscoring the Bulldogs 24-3 in the final 45 minutes of play. The victory over Samford halted ETSU’s three-game skid against the Bulldogs as the Blue & Gold improved to 1-0 to start the season for the fourth time in six years.

Samford scored on its first two drives of the game, quickly building a 14-0 advantage over the home squad. The Bucs were able to crack the scoreboard with five seconds left in the opening half as Quay Holmes (Powder Springs, Ga.) punched in a 1-yard touchdown run to trim the deficit in half.

Holmes was back at it again in the third quarter, finishing off another drive with a 1-yard punishing run to tie the game at 14-14. Holmes’ touchdown was set up by a 59-yard punt return from Alijah Huzzie (Franklin, Ga.) and 30 yards rushing on the ground from Jacob Saylors (Jasper, Tenn.).

The two squads traded field goals as neither team could gain any separation. Tyler Keltner (Tallahassee, Fla.) connected on a 28-yard field goal for his first attempt of the season, knotting things up at 17-17 with 14:55 left in the game.

The ETSU defense halted Samford’s offense on back-to-back drives, putting the ball back in the hands of the Bucs with 6:21 left to play. Three plays later, the Blue & Gold claimed their first lead of the contest after Tyler Riddell (Tampa, Fla.) found Juliun Lane-Price (Mosheim, Tenn.) for a 59-yard strike. The touchdown reception was the first for Lane-Price as he put the Bucs on top, 24-17.

The final drive was filled with drama as the Bulldogs began the series on their own 27-yard line with 2:31 remaining. Chris Oladokun pushed the Samford offense down to the ETSU 26-yard line with 16 ticks left on the clock. On 2nd-and-10, the Bucs flushed Oladokun out of the pocket as Jalen Porter (Gallatin, Tenn.) tipped the pass and Donovan Manuel (Ellenwood, Ga.) came down with the game-sealing interception. Manuel’s interception allowed the Bucs to line up in victory formation, securing the win in front of the home faithful.

NEXT GAME UP
The Bucs will be back in action on March 6 when they travel to Spartanburg, S.C. to take on Wofford at noon. The showdown will come after ETSU’s bye week on Feb. 27.