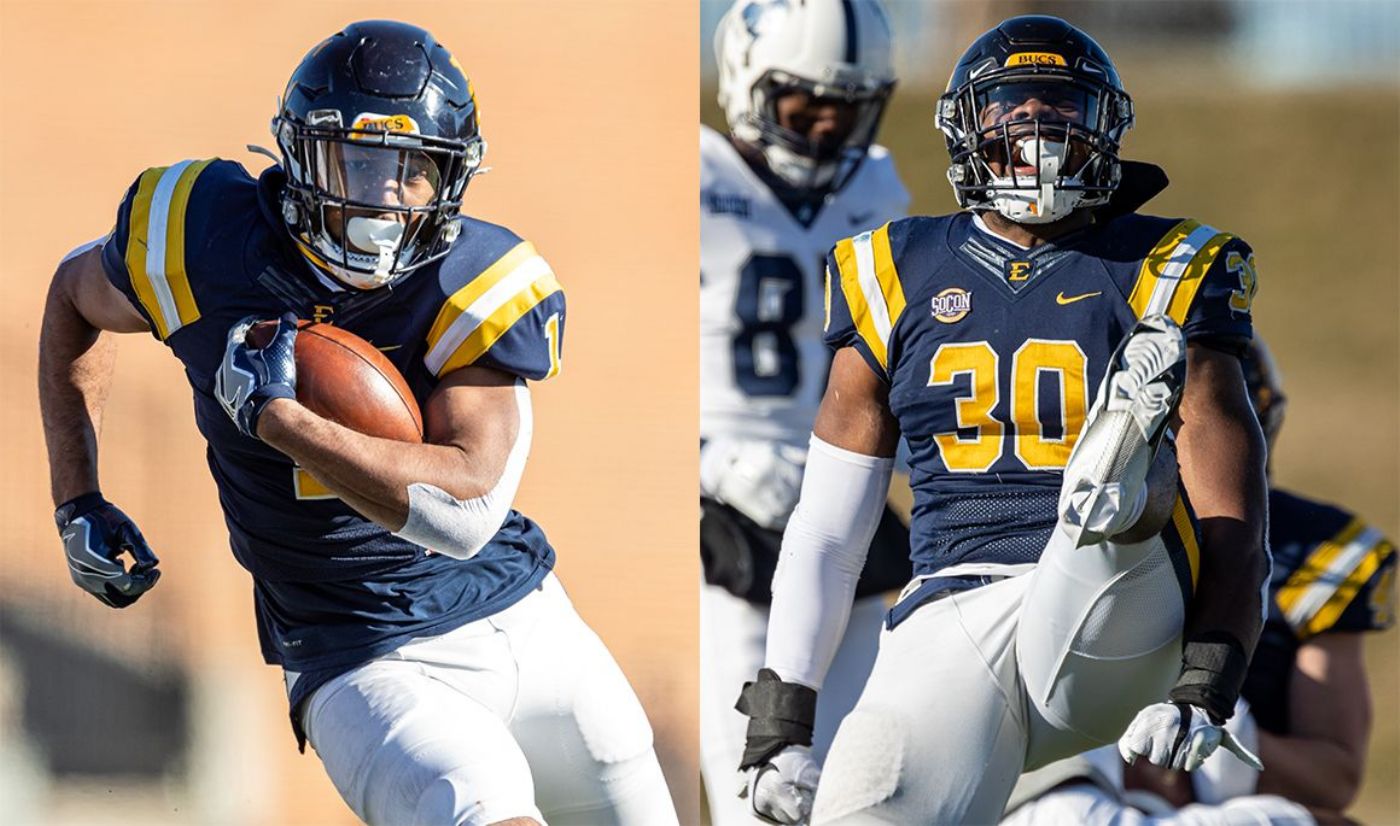 Holmes and Manuel start season off with hardware

SPARTANBURG, S.C. (Feb. 22, 2021) – The Buccaneer Football team kicked off the season with a strong 24-17 win over Samford on Saturday in Johnson City, Tenn. The benefits of the win did not end there as a pair of Buccaneers were named Southern Conference Players of the Week for the opening weekend. Quay Holmes (Powder Springs, Ga.) has been named the SoCon Offensive Player of the Week and Donovan Manuel (Ellenwood, Ga.) was tabbed as the SoCon Defensive Player of the Week, as announced by the league office on Monday afternoon.

Holmes started the season where he left off in 2019, rushing for 125 yards on 19 carries with two scores. Holmes scored the first two touchdowns of the season for the Bucs, both 1-yard punches from the goal-line offense, pulling ETSU even with the Bulldogs following an early 14-0 deficit. Holmes’ effort boosted the redshirt-junior into 7th-place all-time on the ETSU career rushing chart with 2,196 yards, while lifting ETSU to the 1-0 start on the campaign.

The Georgia native crossed the pylons twice in the seven-point victory, marking his sixth multi-touchdown performance in his collegiate career. This is the second time during Holmes’ career that he has garnered SoCon Offensive Player of the Week honors.

Manuel led a strong defensive effort for the Blue & Gold that yielded just three points and 161 yards of offense in the final three quarters of play. This is the first SoCon Defensive Player of the Week award for Manuel. The Georgia product put in a career performance in the win over Samford, tying his career-high in tackles with nine. Manuel was one of four players with a game-high nine tackles, all four on the Buccaneers’ squad.

The redshirt-sophomore led the team in sacks (2.0) and tackles for loss (2.0) in the win over Samford. One of Manuel’s two sacks against Chris Oladokun was a strip sack, the first forced fumble of his collegiate career. Manuel ended the game with an exclamation point in front of the home fans by picking off a pass from Oladokun, that was tipped by Buccaneer teammate Jalen Porter (Gallatin, Tenn.), with eight seconds left in the fourth quarter.

The Bucs will get an extra week to prepare for Wofford as ETSU is currently in its bye week. The Blue & Gold will return to action on Saturday, March 6 when the Bucs visit Wofford in Spartanburg, S.C. for a noon kickoff.