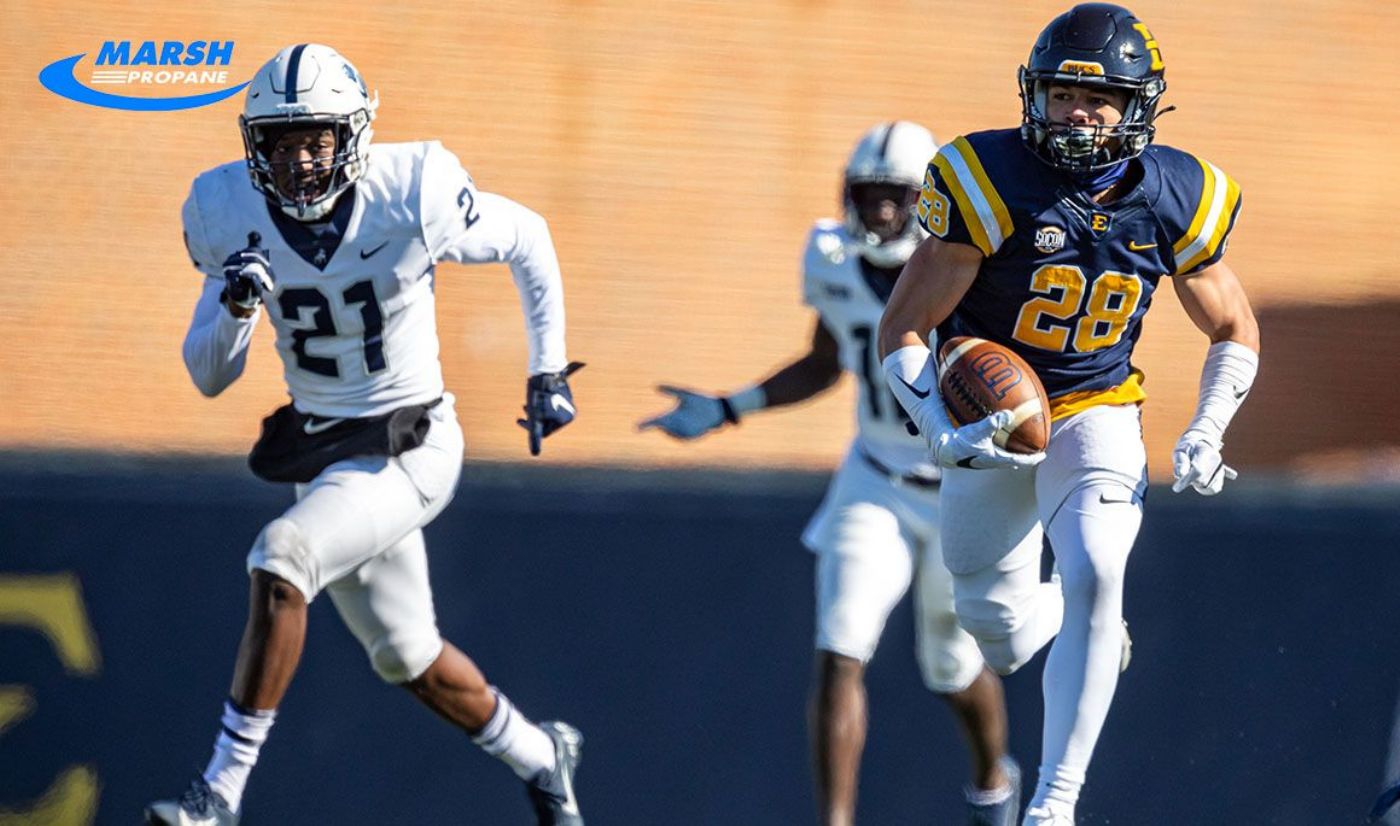 ETSU Hits the Road for First Time this Spring
ETSU at The Citadel | March 20, 2021
Related Links

CHARLESTON, S.C. (March 19, 2021) – ETSU Football will finally hit the road for the first time in the spring season as the Bucs travel to Charleston, S.C. to take on The Citadel on Saturday at 1 p.m. The contest will be played at Johnson Hagood Stadium on the campus of The Citadel. Here are your things to know, brought to you by Citizens Bank.

Close Calls
The Bucs are prone to close contests since the return of football. ETSU has competed in 48 games since rejoining the Southern Conference in 2016. Of those 48 games, 26 have been decided by one possession or less. During that 48-game span, 34 of those outings have been Southern Conference battles. Of those 34 SoCon outings, 22 have come down to one possession separating the squads. The Bucs are 11-11 in one-possession games in the Southern Conference since rejoining the league in 2016. ETSU is 1-1 in said battles this spring season, defeating Samford by seven points (24-17) and falling to Furman by four points (17-13).

Running Free
Despite the four-point loss to the Bulldogs last season, running backs Quay Holmes and Jacob Saylors turned in dominating performances. The duo combined for 205 yards on the ground, throwing some of The Citadel’s medicine back in its face. Holmes scampered for 120 yards on 20 carries, while Jacob Saylors accounted for 85 yards on 13 carries. Prior to the 2019 battle, the leading rusher for the Bucs against the Bulldogs (since the return of football) was Jajuan Stinson who rushed for 34 yards in 2016. During a three-game span (2016-18) ETSU rushed for only 168 yards total during the combined games. The Bucs carried the ball 39 times for 224 last year, including 33 rushes for 205 yards between the duo of Holmes and Saylors.

Feasting
The Bucs have already squared off with the top two offenses in the conference. Samford leads the league in scoring, averaging 36.5 points per game, while also pacing the league in offense with 454.5 yards per game. Meanwhile, Furman is averaging 27.2 points and 427.0 yards per outing. The Buccaneer defense held both teams in check, allowing 17 points to each opponent and holding them well below their season average (Samford - 320 & Furman - 292).

Battling the Bulldogs
The Citadel is currently amidst one of its longest losing streaks in program history, having dropped seven consecutive battles. The Bulldogs are 0-7 on the campaign, including 0-3 this spring (all SoCon matches). The Citadel most recently dropped a 21-14 decision at Western Carolina on Saturday, March 13. The Citadel also came short of defeating Chattanooga, falling to the Mocs by the final of 25-24. The Bulldogs opened the spring campaign with a 42-28 loss at Mercer. The Citadel is averaging 13.6 points per game during the 2020-21 season, while yielding 30.7 points to opponents. The Citadel, using its triple-option offense, is averaging 232.4 yards on the ground this season, while only amassing 57.7 yards in the air.

ETSU and The Citadel have met 28 times on the gridiron, with the Bucs clinging to the 16-12 advantage. The series is knotted at 7-7 in the 14 contests that have been played at Johnson Hagood Stadium. Since the return of football in 2015, ETSU is 1-3 in contests against the Bulldogs with the lone win coming in 2018. The Citadel is 3-2 in the last five showdowns against the Bucs in Charleston, S.C.

The BSN begins its pregame programing one hour and 30 minutes prior to kickoff with the 30-minute-long Tennessee Lottery Tailgate Show, followed by the Randy Sanders Pregame Show brought to you by Blue Cross & Blue Shield which will lead up to 30 minutes prior to kickoff. The Appalachian Orthopaedic Countdown to Kickoff will then lead into the final moments before kickoff.

At halftime, the crew will have the Zaxby’s Halftime Show, while fans can tune into the Ferguson Enterprise Post Game Show for a full wrap up, with game statistics, players and coach interviews, and other post-game information.

Saturday’s game will also be broadcast on ESPN+ with the team of Dave Weinstein (play-by-play) and Jason Kempf (color) on the call.