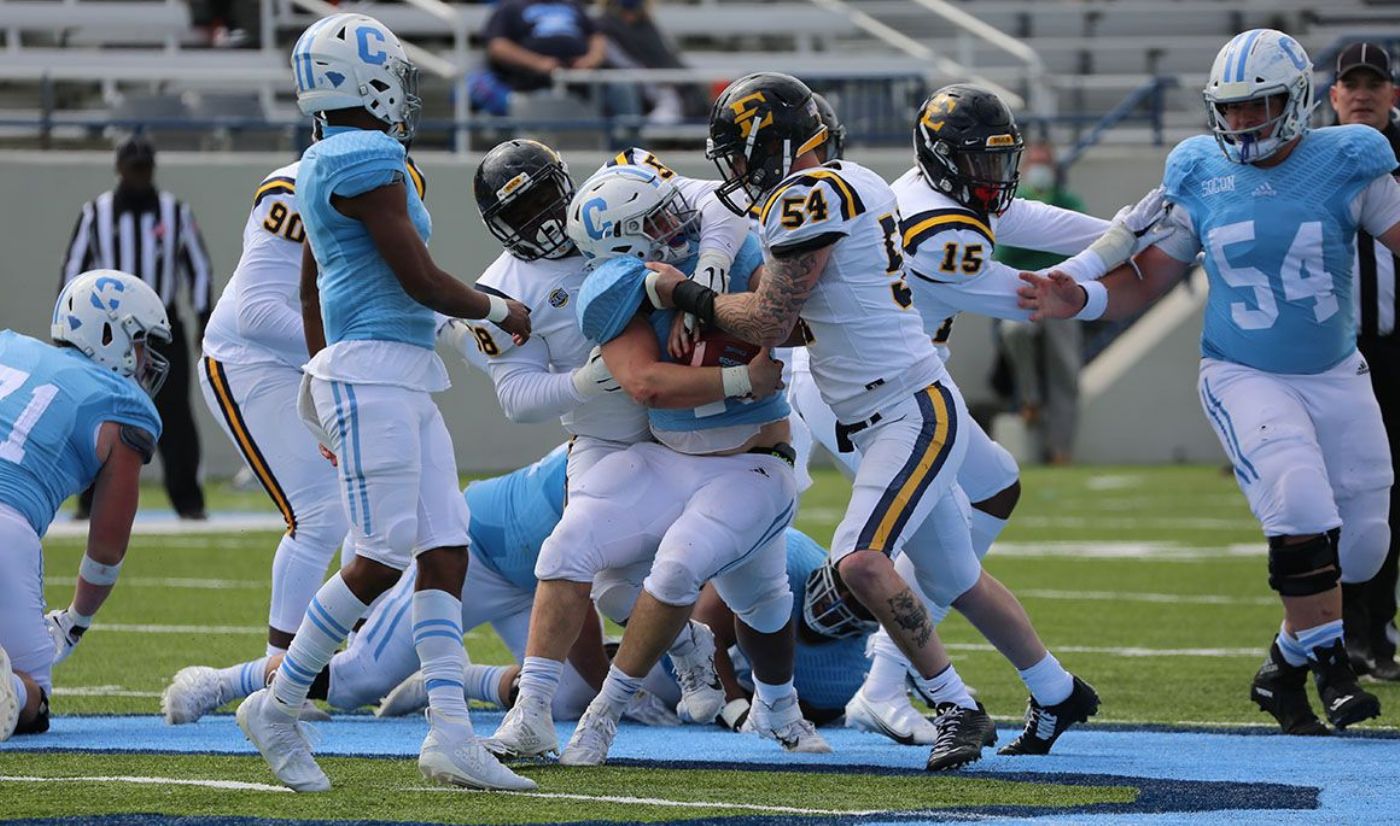 CHARLESTON, S.C. (March 20, 2021) – It was another one-possession contest between ETSU and The Citadel, this time with the Bucs claiming revenge with a 28-21 victory over the Bulldogs in Charleston, S.C. on Saturday afternoon. The Bucs avenged the 2019 homecoming loss, winning their second consecutive game in Charleston. ETSU improved to 2-1 on the season, all in Southern Conference action, while The Citadel falls to 0-8, 0-4 on the year.

ETSU was able to capitalize on The Citadel blunders, scoring 21 points on three Bulldog turnovers, enabling the Bucs to leave Johnson Hagood Stadium with the seven-point victory.

It was tough sledding for the Buccaneer offense as ETSU totaled just 223 yards of offense. However, the offense was enough as redshirt-freshman quarterback Tyler Riddell (Tampa, Fla.) threw a pair of touchdown passes to Jacob Saylors (Jasper, Tenn.) and Will Huzzie (Duluth, Ga.), finishing the game with 182 yards passing and two scores.

ETSU scored the first touchdown of the game, a 27-yard fumble recovery for the 7-0 lead. However, The Citadel answered with 14 consecutive points before the Bucs retaliated with Saylor’s touchdown before the half.

The Blue & Gold then delivered a quick punch, scoring two touchdowns in the first five minutes of the second half to take the 14-point advantage over the host squad.

The back-and-forth affair lived up to its reputation as the Bulldogs closed the gap to 28-21 with less than three minutes on the clock in the fourth quarter.

After forcing a three-and-out, The Citadel offense took over in ETSU territory. However, the Buccaneers’ defense did what they do best and slammed the door shut on the opposing offense. Facing a 4th-and-2 at the ETSU 37-yard line, the Bulldogs tried to race to the edge to pick up the first down. Tyree Robinson (Gainesville, Ga.) and fellow defensive back Alijah Huzzie (Franklin, Ga.) seemed to be shot out of a cannon, delivering the game-winning hit on Sam Llewellyn, stopping the Bulldog running back short with one yard to go.

NEXT GAME UP
The Bucs will return home to the friendly confines of William B. Greene, Jr. Stadium as ETSU plays host to Western Carolina at 1 p.m. on March 27. The showdown with the Catamounts will mark the third Blue Ridge Border Battle meeting.