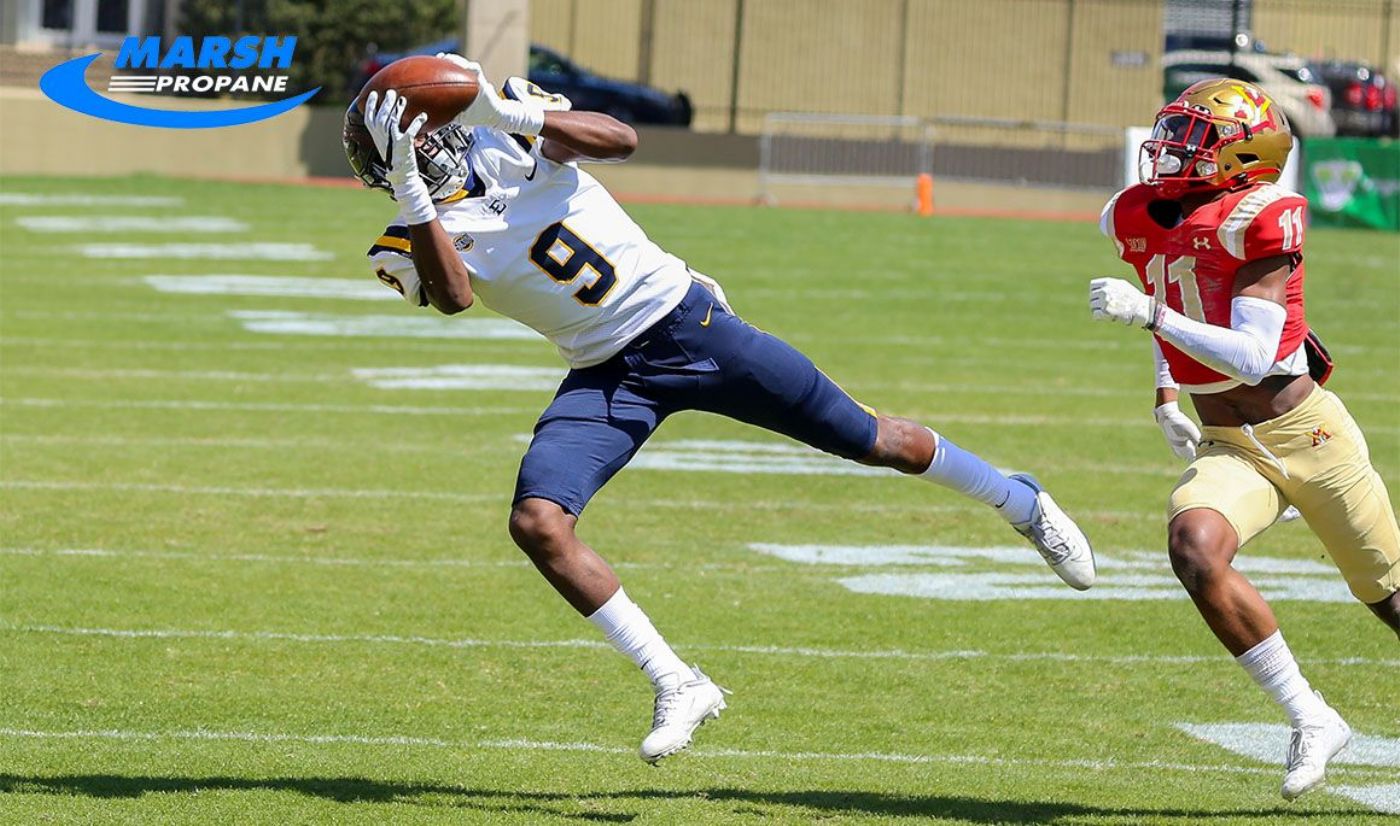 MACON, Ga. (April 9, 2021) – Following a big win against VMI on Saturday, April 3, the Buccaneer Football squad is hoping to keep the momentum rolling heading into Macon, Ga. The No. 20/21 Bucs are aiming for a key Southern Conference road victory over a red-hot Mercer squad to keep both the FCS playoffs alive as well as the league crown. Kickoff between the Bucs and the Bears is slated for 6 p.m. on Saturday night at Five Star Stadium.

More at Stake
Saturday’s game between the Bucs and Bears has a lot on the lines for the Blue & Gold. With a win against Mercer, ETSU would improve to 5-1 in Southern Conference action, including the win over 10th-ranked VMI on Saturday by the final of 24-20. The Bucs would lay claim to the league crown with a win on Saturday and a VMI loss to The Citadel on April 17. Should the Keydets handle the Bulldogs, the Bucs would still have a strong resumé for an at-large bid into the 2021 FCS Playoffs.

Bearly Believable
The 2019 battle between the Bucs and the Bears was one for the record books as Quay Holmes (Powder Springs, Ga.) rushed for a program-record 255 yards. Holmes added three touchdowns to the mix as ETSU won its final home game of the season. The two squads combined for 600 yards as Holmes and Mercer’s Tyray Devezin combined for seven touchdowns.

National Recognition
Quay Holmes was named Southern Conference Offensive Player of the Week after his performance in Lexington, Va. Holmes collected 135 yards on the ground with two rushing touchdowns. The Georgia product also added 158 kick return yards on five attempts, corralling 293 all-purpose yards. The stellar week from the redshirt-junior tailback earned him honors as the FCS National Player of the Week.

Battling the Bears
Mercer holds a 4-5 overall record heading into Saturday’s contest, including 4-2 in the Spring season. The Bears enter the game on a winning streak similar to the Bucs at three games. Mercer has defeated back-to-back Top 25 competitors, handling No. 9 Chattanooga (35-28) and No. 17 Furman (26-14). The Bears also played three games in the fall, dropping all three outcomes. Mercer is 3-1 in home contests during the 2020-21 season, including 3-0 during the spring. The lone setback at Five Star Stadium was a 20-17 defeat at the hands of Abiline Christian on Oct. 31.

Mercer has seen a surge from freshman quarterback Carter Peevy who was recently named FCS Freshman of the Week. Peevy tossed a program-record 406 yards in the 12-point win over Furman, including tossing a pair of fourth-quarter touchdowns. The freshman quarterback is 74-of-136 with 1,091 yards and seven touchdowns. The Bears’ defense has been a key part during the winning streak, holding opponents to 23.3 points per game.

Series History
The Bucs and Bears have a brief history of squaring off against each other, having met on the gridiron just five times in program history. The Bucs hold a 3-2 advantage over the Bears, having claimed three consecutive victories in the series. Each of the last four showdowns have been decided by one possession, including the 38-33 Buccaneer win in 2019. ETSU is 1-2 all time against the Bears when playing in Macon, Ga. In the last four battles, ETSU is outscoring Mercer 98-95 setting up for dramatic finishes.

The BSN begins its pregame programing one hour and 30 minutes prior to kickoff with the 30-minute-long Tennessee Lottery Tailgate Show, followed by the Randy Sanders Pregame Show brought to you by Blue Cross & Blue Shield which will lead up to 30 minutes prior to kickoff. The Appalachian Orthopaedic Countdown to Kickoff will then lead into the final moments before kickoff.

The broadcast team of “Voice of the Bucs” Jay Sandos, color analyst Robert Harper, sideline reporter Kevin Brown, and studio hosts Mike Gallagher and Don Helman will provide ETSU fans all the information they need to complement their game-day activities.

At halftime, the crew will have the Zaxby’s Halftime Show, while fans can tune into the Ferguson Enterprise Post Game Show for a full wrap up, with game statistics, players and coach interviews, and other post-game information.

Saturday’s game will also be broadcast on ESPN+ with the team of Frank Malloy (play-by-play) and Jason Patterson (color) on the call.