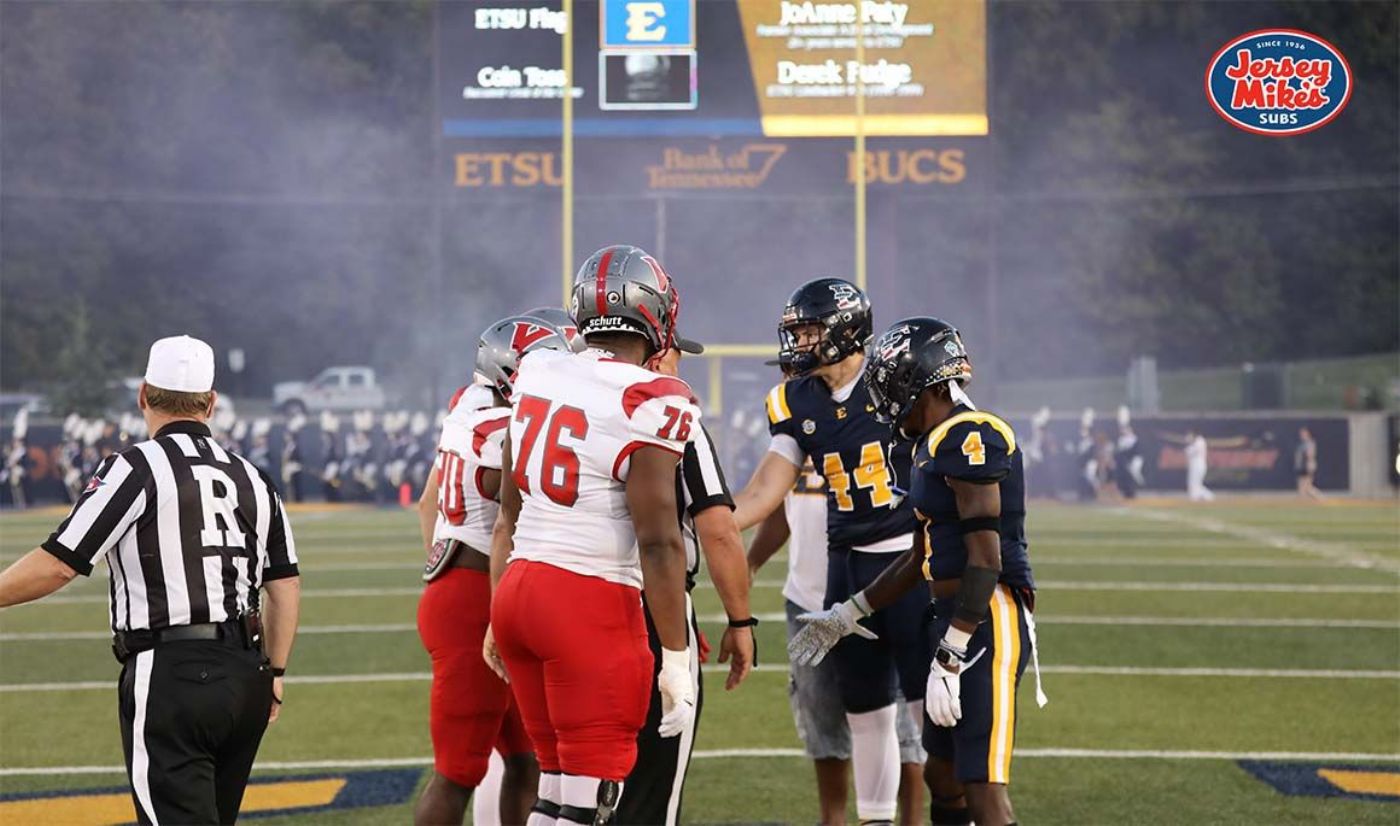 Bucs hoping to improve to 3-0 on the year

JOHNSON CITY, Tenn. (Sept. 17, 2021) – The Bucs have moved on to opportunity number three as ETSU has its eyes set on Delaware State in Saturday’s home battle at William B. Greene, Jr. Stadium. The Bucs will play host to the Hornets at 7:30 p.m., aiming to remain undefeated in the young season.

SAY it ain’t so
The Bucs are blessed with a dynamic backfield that features Quay Holmes and adds prominent pieces such as Jacob Saylors, Bryson Irby, DJ Twitty and Trey Foster. When Holmes isn’t punching the ball up the middle, you can find one of the other featured backs filling the shoes in nicely. That is exactly what Jacob Saylors did on Saturday against the Cavaliers. The Tennessee product led the Bucs in rushing yards with 75 on just six carries. Saylors added a 16-yard touchdown run to his stat line. The junior back was not done there as he also added a career-high 75 yards in the receiving game on just three receptions, including a career-long 64-yard touchdown pass from Tyler Riddell. To top it all off, Saylors chipped in for 23 kick-return yards on one attempt, finishing the game with the third-most all-purpose yards in his career with 173 all-purpose yards. The performance by Saylors earned him his first-ever SoCon Offensive Player of the Week honor. Currently, Saylors ranks first in program history in average yards per carry at 6.3 - 0.7 yards per carry more than Bob Hardy (5.6).

What a Crowd
The Bucs were able to open up the home season in style as a record-setting 9,720 fans greeted the Blue & Gold in the first game at William B. Greene, Jr. Stadium this season. ETSU Athletics put on Heroes Day in conjunction with 9/11 remembrance. The Bucs treated the ETSU faithful to a dominating performance, toppling UVA Wise by the final score of 45-14. ETSU eclipsed 500 yards of offense in the home-opening win, the most yards in a game since recording 541 in a triple-overtime thriller over Western Carolina in 2018. With the win, ETSU improved to 2-0 for just the second time since the return of football. ETSU Athletics capped off the evening with a firework display for the fans who remained in attendance.

What’s Your Favorite Flavor of Turnover?
ETSU has been disruptive to opposing offenses in the first two weeks of competition. In the Bucs’ season opener, the Blue & Gold forced three turnovers while the offense didn’t give the ball away once. ETSU successfully picked off the Commodores twice and scooped up a fumble and returned it to the house, accounting for all three turnovers. The Bucs would have had two defensive touchdowns if it were not for a questionable unsportsmanlike penalty. The Bucs added two more interceptions in the win over the Cavaliers, with Tyree Robinson running one back to the three-yard line and Jalen Porter securing his first collegiate pick. Heading into the third week of the season, ETSU currently ranks 7th in turnover margin and 17th in turnovers gained. ETSU accounted for eight turnovers in the spring season and 11 turnovers in 2019 (last full season). The Bucs are already five turnovers in through the first two outings.

Kicking it with Keltner
The sophomore kicker has made a name for himself since donning the Buccaneer uniform. In the spring season, Keltner laced a 54-yard program-record field goal in the win over Western Carolina. Through the first two games, Keltner is 4-of-5 in field goal attempts and is a perfect 8-for-8 in PATs. Keltner accounted for 11 points in the season-opening win over the Commodores and added nine more points in the win over the Cavaliers. With the field goal against UVA Wise, Keltner is now solo fifth all-time in career field goals made with 25. In addition, Keltner jumped into solo sixth in career PATs with a perfect 50-for-50 mark and has 125 career points.

We Dare Your
The Bucs have registered 23 games with at least two turnovers since restarting the program in 2015 – ETSU is 17-6 in those contests. ETSU added a second consecutive game to that tally on Saturday after forcing two turnovers against UVA Wise. Tyree Robinson and Jalen Porter accounted for the two turnovers against the Cavaliers. Through the first two games of action, the Bucs have posted a stifling defense - ranking 10th in rush defense (62.0), 11th in pass defense efficiency (96.85), 6th in scoring defense (8.5), 7th in turnover margin (+2.0), 17th in turnovers gained (5) and 8th in redzone defense (.500).

Swatting the Hornets
Delaware State enters the weekend with a 1-1 record on the season, having defeated Bowie State (32-24) in the season opener before falling to Georgetown in overtime last weekend, 20-14. The Hornets are led by Sy’veon Wilkerson who has rushed for 190 yards on 45 carries and four touchdowns. Tylik Bethea has led the attack in the passing game with 227 yards and one touchdown, posting a 24-of-42 mark on the year. Kamari Jackson leads the defense in overall tackles (16), while Ronald Holmes seems to be the anchor in the unit with nine tackles, 5.0 tackles for loss and 3.0 sacks. Delaware State has not won a non-conference FCS game since defeating VMI in 2012 by the final score of 17-10. Under the direction of Coach Milstead, the Hornets are 8-22 since he has taken over the program in 2018. This will be the first-ever meeting between the Bucs and the Hornets. ETSU is 0-1 all-time against opponents in the MEAC - dropping a 38-13 decision to former MEAC member North Carolina A&T on Oct. 19, 1991.

Saturday’s game will also be broadcast on ESPN+ with the team of Mike Gallagher (play-by-play) and Mark Hutsell (color) on the call.