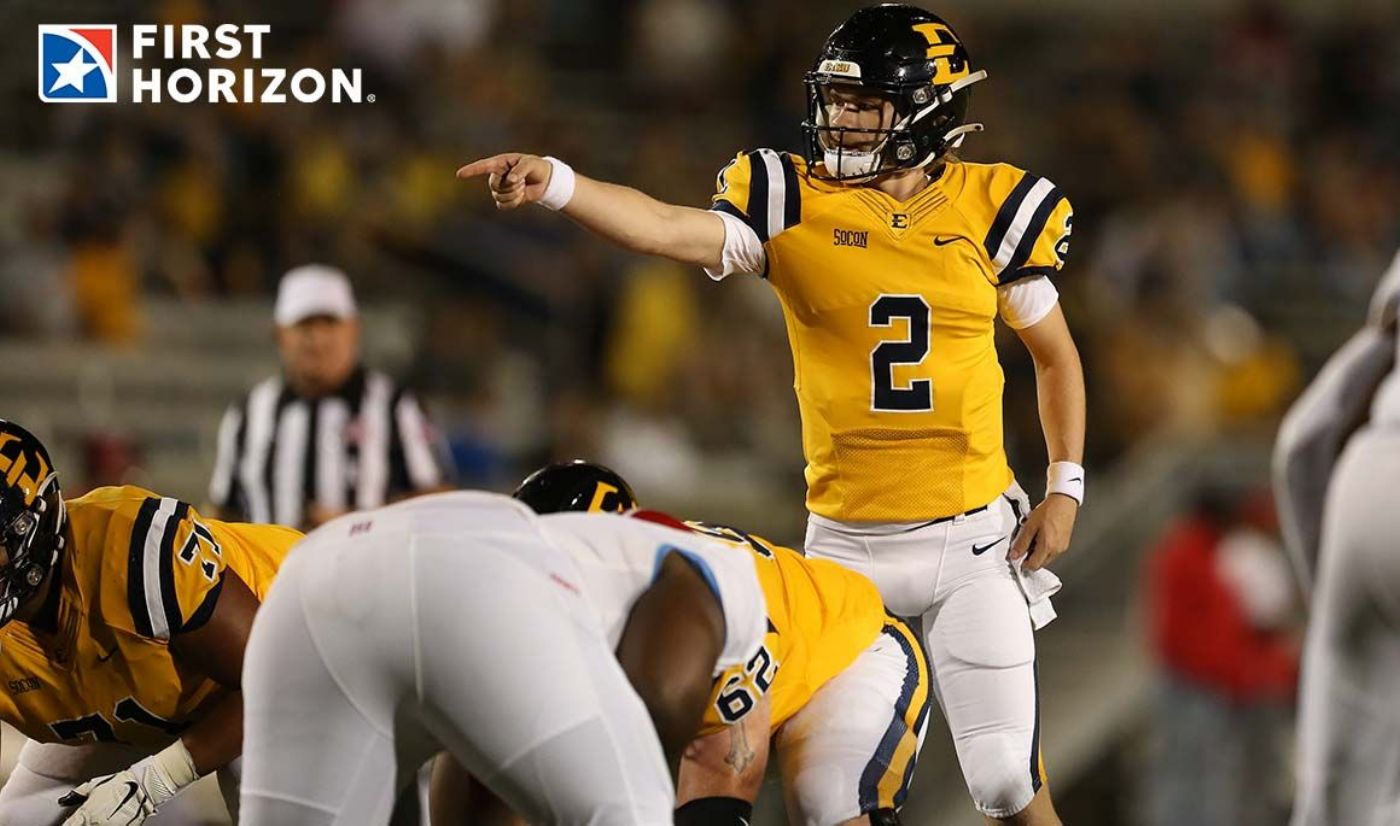 BIRMINGHAM, Ala. (Sept. 24, 2021) – The Bucs are making the trek to Birmingham, Ala. for the 2021 Southern Conference opener on Saturday, looking to remain undefeated on the season. The Bucs will have to square off against the Samford Bulldogs, a squad that is already 1-0 in league play this fall.

Huzzie: The Human Highlight Reel
Come one, come all to witness the amazing Human Highlight Reel - WILL HUZZIE!! The ETSU wideout has made it a habit to haul in difficult receptions with ease in his career. It all began with his best Odell Beckham impression at Chattanooga in 2019 that earned him a spot on SportsCenter Top 10. The Georgia product has been at it again with ridiculous receptions to begin the season. Huzzie has hauled in a trio of one-handed receptions in the first two games, followed by a diving catch down the sideline in Saturday’s win over Delaware State. No matter the number of people guarding him or the difficulty of the catch, you have to like the odds of the 6’3” redshirt-sophomore out of Duluth, Ga

Mr. 3,000
Quay Holmes crossed a new threshold in Saturday’s win over Delaware State, becoming the second Buccaneer in program history to eclipse 3,000 career rushing yards. Holmes officially surpassed Brian Edwards (2,930) for the second-most rushing yards in ETSU history. The Georgia native is currently sitting at 3,079 career yards. Holmes added 157 yards on the ground in the win over the Hornets, including a 64-yard touchdown run early in the fourth quarter. The 157-yard outing for Holmes was the fourth-most rushing yards in a single game in his illustrious career. Holmes is also sitting in fourth all-time in ETSU career scoring with 210 points. The 2019 campaign was the last full season for Holmes and it was a career-year for the redshirt-junior tailback. Holmes appeared in all 12 games with eight starts on the season, rushing for 1,143 yards on the year behind 206 carries. His 1,143 yards on the ground notched the fourth-most rushing yards in a single season by an ETSU back.

Dynamic Duo
ETSU is anchored by a dominating duo in the backfield. The league and the FCS has seen what Quay Holmes is capable of. In fact, Holmes leads the Southern Conference in rushing yards per game (122.7), is second in scoring TDs (24) and in all-purpose yards per game (122.3). The redshirt-junior is leading the team in rushing yards (368) and rushing touchdowns (4). Joining Holmes is junior tailback Jacob Saylors who is off to a phenomenal start to the season with 207 rushing yards on just 28 carries, averaging 7.4 yards per carry. Saylors has found the endzone four times as well, three rushing and one receiving. The Tennessee native needs only 67 more yards to pass Gaven Varner for the 10th-most rushing yards in program history with 1,799. Saylors is averaging 6.5 yards per carry, proving to be the most productive back with the ball in his hands in program history. In Saturday’s 38-6 win over Delaware State, Saylors averaged 9.9 yards per carry. Bob Hardy (1972-74) is second behind Saylors with 5.6 yards per carry. Saylors is also second among active players in career receiving yards with 571 on 57 receptions with two receiving touchdowns to his credit.

Shutting Down Samford
The history between the Bucs and the Bulldogs is not a deep tradition, with only eight outings between the two foes. However, Samford holds a 6-2 advantage in the series history, including 3-0 when played in Birmingham. The Bucs have the most recent win in the series, defeating the Bulldogs by the final score of 24-17 in Johnson City during the 2021 spring season. Samford upended ETSU 24-17 the last time that the two teams met in Birmingham in 2019. The Bulldogs enter Saturday’s game with a 2-1 overall record, having defeated Western Carolina in their SoCon opener by the final score of 42-37. Samford’s lone loss was a 33-27 defeat at the hands of UT Martin on Sept. 11.

ETSU will have its hands full with Samford quarterback, Liam Welch. The Bucs did not see Welch in the spring as he became the man under center following the Samford loss to the Bucs, turning in SoCon Offensive Player of the Year numbers. Welch is already near 1,000 yards passing with six touchdowns to his credit. The Samford offense is averaging 313.0 passing yards per game, averaging an eye-opening 40.3 points per outing. The Bulldog defense is tied with ETSU and Furman for the best turnover margin in the conference at +3, but is allowing 28.0 points to opposing offenses. The Bulldogs also boast the SoCon’s all-purpose leader, Montrell Washington. Washington is the leading receiver on the Bulldogs squad with 245 yards with 15 receptions and two touchdowns. He has also chipped in 41 rushing yards and is dangerous in the return game, totaling 82 punt return yards and 148 kick return yards. Washington leads the conference in all-purpose yards with 516, averaging 172.0 per game.

The broadcast team of “Voice of the Bucs” Jay Sandos, and color analyst Robert Harper, along with studio hosts Mike Gallagher and Don Helman will provide ETSU fans all the information they need to complement their game-day activities.

Saturday’s game will also be broadcast on ESPN+ with the team of Curt Bloom (PxP), Damian Mitchell (Analyst) and Blake Gardner (Sideline) on the call.