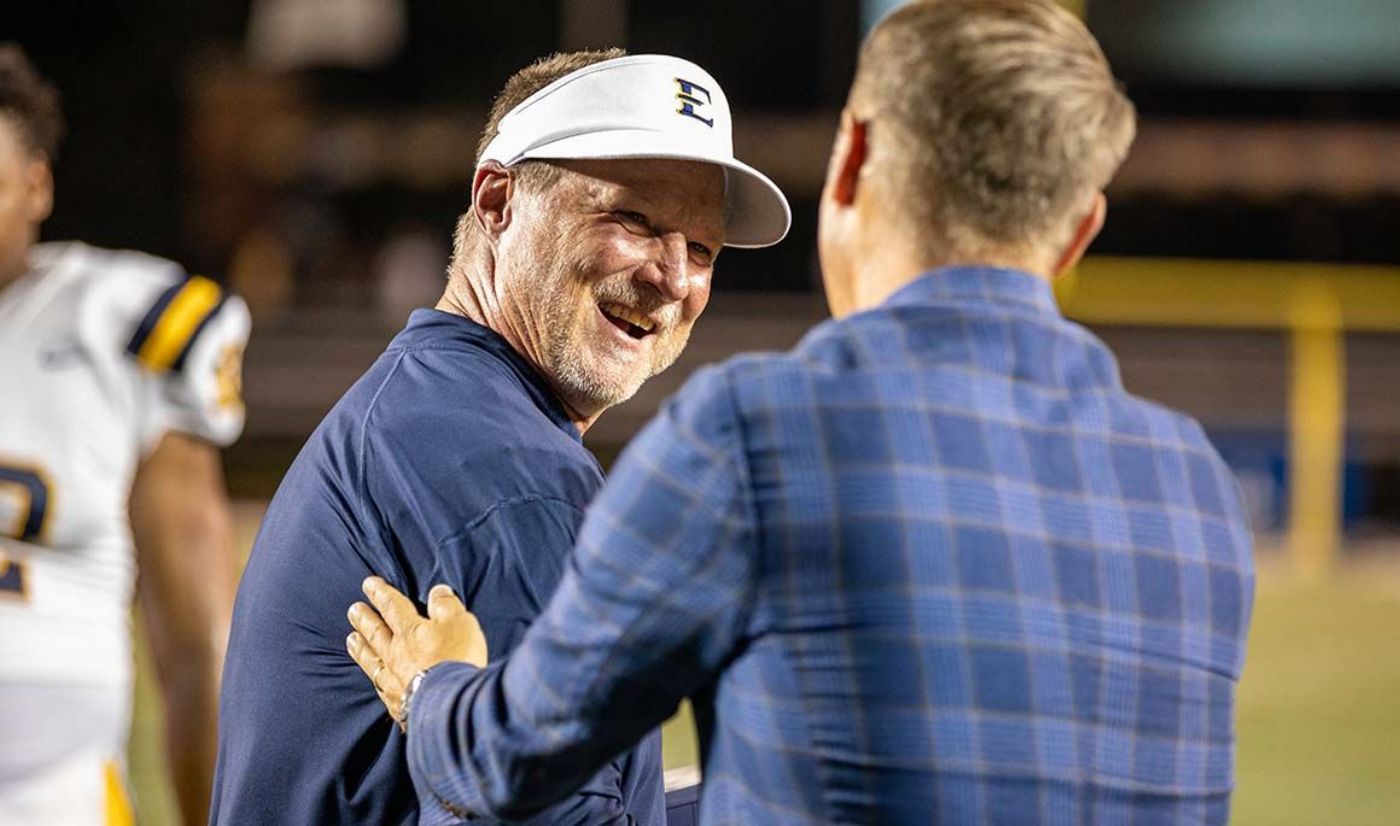 Below are comments from Coach Sanders, Folks and Huzzie:

Head Coach Randy Sanders
What are your initial reflections from Saturday’s overtime win over Samford?
“There were definitely some crazy stats from Saturday, but there is only one stat that I have always worried about and that is ‘what is the final score and who wins the game?’ I thought that there were two teams that played really hard and battled. It was one heck of a football game. I told our guys before we got out there, let’s have some fun. I had a blast even when part of it was frustrating. I thought we could have played better, but you have to give Samford credit the way they played.”

What did you see with the offense being able to step up the way they did?
“I felt like offensively, if we had to do it, we could have that type of game. It’s not a matter of how many yards or how many points you can score. It is a matter of putting all three together: offense, defense and special teams. Our guys were able to respond on Saturday. It wasn’t perfect, but we were able to finish the game with four consecutive scoring drives. It doesn’t matter if we win a high-scoring game or a 3-2 game, let’s just find a way to win.”

How do you prepare for an offense like Wofford?
“They are always a challenge to prepare for because they are pretty multiple in their run game looks and what they do. They run some power games, some traditional three-back offense, they also get the quarterback involved in the run game. They are also throwing it better than they have been. It will be a different challenge than what we faced last week. The challenge will be, how can we make them one dimensional?”

Linebacker – Jared Folks
Talk a little bit about the challenge in preparing for Wofford style of play following Samford.
“As far as what we are going to do, that will be up to Coach Taylor on that one. We just need to do what Coach Sanders said earlier and get out on that practice field and get sweaty, get working. The work is not done and this is opportunity number five. It’s another week and we have to go 1-0. It’ll be a challenge, but that is all it is – a challenge. We have to be willing to go out there and work.”

What does Saturday’s win mean for you guys going forward?
“I have been around a lot of teams and a lot of games and I feel that Saturday showed the resiliency that we have. There were a couple times where things could have broken off but we stuck together. Coaches did a great job pulling us together and the leaders did a good job of stepping up. I think it really set the foundation for having a backbone and knowing what we can accomplish. When adversity hits, we know we will have each other. The season isn’t going to be perfect, so it’s just really having that foundation that things aren’t always going to be smooth. We have to work and keep our heads down.”

Wide Receiver – Will Huzzie
What was the experience like playing in a game like that?
“First of all, I don’t want to be in a situation like that ever again. That is my first time playing in an overtime game like that and it was a rollercoaster. I am glad that we found a way to pull it off. It just showed us that we don’t ever give up and that we have some grit in us.”