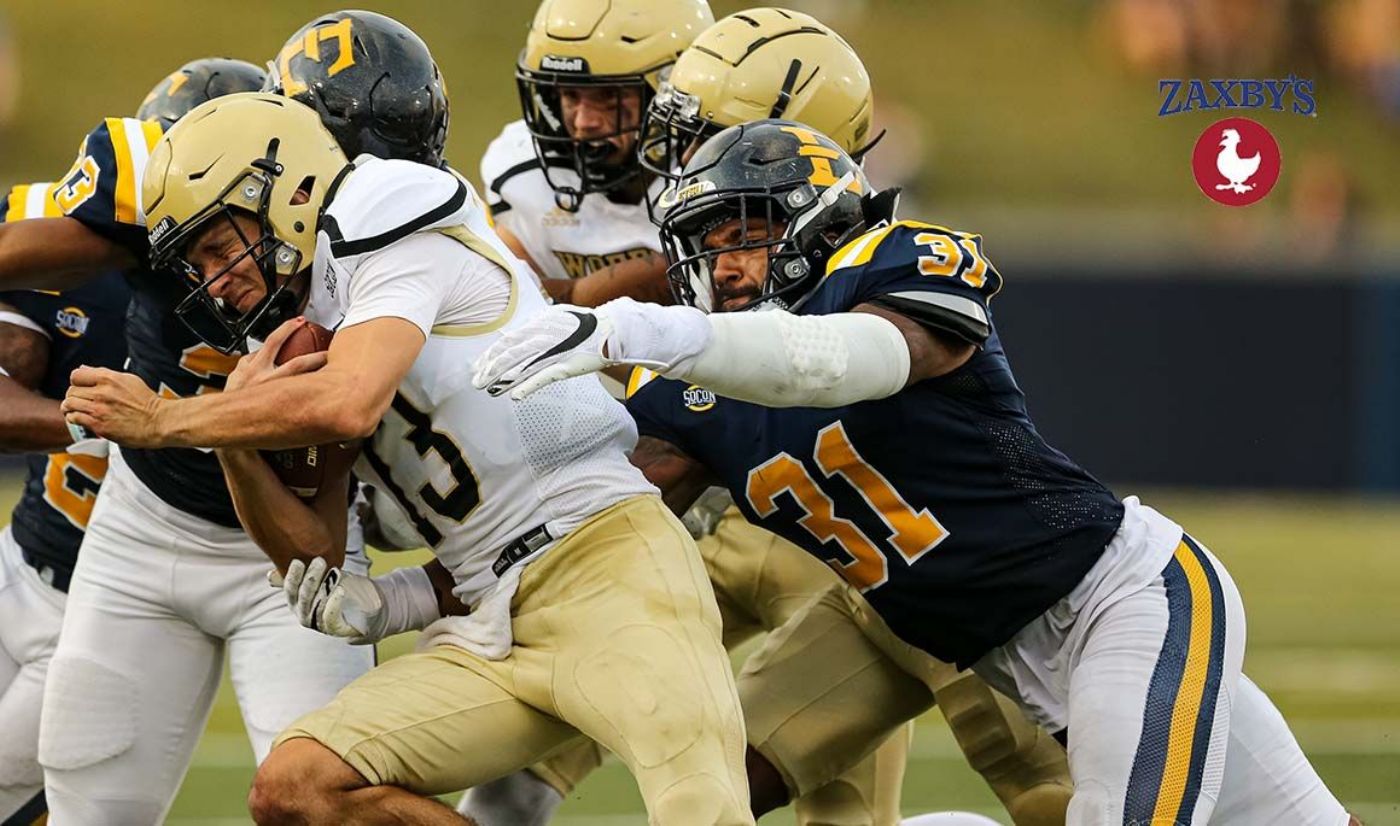 JOHNSON CITY, Tenn. (Oct. 8, 2021) – The undefeated Bucs will be putting their record to the test again this weekend, squaring off against the run-heavy offense of The Citadel on Saturday at William B. Greene, Jr. Stadium. ETSU (5-0, 2-0 SoCon) is looking to maintain their top spot in the league standings with a win over the Bulldogs (2-2, 1-0 SoCon).

High-Octane Offense
The Buccaneer defense has been the strong point of the ETSU squad in years past. The Bucs are now displaying another dimension of the success - the offense. For the third time this season, the Buccaneer offense accounted for over 450 yards, this time tallying 468 yards against the Terriers. In 2018, ETSU posted four games of 450 yards or more in Randy Sanders first year at the helm of the program. The 2019 season witnessed three games of 450 yards or more, while the 2021 spring campaign did not yield any games in the 450-yard category. The Bucs’ recorded a season-high 531 yards of offense against Samford, while also crossing the 500-yard plateau against UVA Wise (528).

Nation’s Best
ETSU is anchored by the nation’s best running back duo in all of FCS football. Quay Holmes leads the Bucs in rushing yards (617) and rushing touchdowns (7) and is followed by Jacob Saylors with 307 rushing yards and five touchdowns. In Saturday’s win, Saylors officially cracked the top 10 in program history for career rushing yards with 1,832, passing Gavin Varner (1,798). Saylors is currently averaging 6.3 yards per carry in his career, proving to be the most productive back with the ball in his hands in program history. Saylors has also flipped the field this season for ETSU, accounting for 309 kick return yards to set the Bucs up in prime position to score. Saylors is second on the team in all-purpose yards (728), trailing Holmes who has 732 all-purpose yards. The ETSU duo rank second (Holmes) and third (Saylors) in all-purpose yards in all of FCS football, proving to be the most lethal duo in the backfield.

First & Fourth
ETSU has begun and ended the games in total dominance, outscoring opponents by a total of 103-28. The Bucs are outscoring opponents 48-6 in the first quarter, having yielded first-quarter field goals to both Vanderbilt (Sept. 4) and Samford (Sept. 25). ETSU has scored in the opening quarter in four consecutive games, including holding a 10-0 advantage against the Terriers after the first quarter on Saturday. The Bucs are holding a 55-22 advantage in the final quarter of play this season, proving to have the ability to close games. ETSU has pitched four fourth-quarter shutouts in five games, surrendering all 22 points against Samford, still outscoring the Bulldogs 24-22 in the final quarter in Birmingham. The Blue & Gold are outscoring the remaining four opponents 31-0 in the fourth quarter.

Experience Like None Other
The Bucs played in front of the largest crowd in William B. Greene, Jr. Stadium history on Saturday. A grand total of 10,153 fans were in attendance to witness the Bucs rewrite history with their first win over Wofford in 8,365 days. The crowd of 10,153 was the first crowd over 10k in stadium history, setting a new program record. The Bucs have now posted the two largest crowds in stadium history this season, welcoming 9,720 fans in the win over UVA Wise on Sept. 11. The ETSU crowds have been like none other, bringing the electricity game in and game out.

Battling the Bulldogs
The Citadel is coming off a big win itself on Saturday, holding off military rival VMI by the final of 35-24 in Charleston, S.C. With the win, the Bulldogs improved to 2-2 on the season and 1-0 in league action. The Citadel’s victory was in large part to a pair of 100-yard rushers - quarterback Jaylan Adams carried the ball for 188 yards and one touchdown, while running back Logan Billings scampered for 112 yards and two touchdowns. In all, The Citadel accounted for 363 yards and four touchdowns on 62 rushing attempts. Standout wide receiver Raleigh Webb finished the game with one reception for 80 yards, a game-opening touchdown to put the Bulldogs on top early. On the season, Adams leads the team in rushing with 408 yards and three touchdowns, while also throwing for 414 yards and two scores. Nathan Storch has added a trio of touchdowns in the ground game as well, tacking on 152 rushing yards. Raleigh Webb is the go-to receiver with 248 yards on 10 catches and two touchdowns. The defense is led by Willie Eubanks III with 36 tackles and 1.0 tackles for loss.

Series History
ETSU is 17-12 all-time against The Citadel as the two squads prepare for the 30th all-time meeting between the two squads. The last battle belonged to the Bucs as ETSU outlasted the Bulldogs, 28-21 in Charleston, S.C. The Blue & Gold forced three turnovers in the last showdown, including returning a 27-yard fumble recovery for a touchdown in the game’s opening drive. Tyree Robinson has scored two defensive touchdowns against The Citadel, both of which came down in South Carolina. The Bucs hold a 9-5 advantage over The Citadel when playing games inside Johnson City, despite dropping the last two outings to the Bulldogs. The Blue & Gold are 6-4 in the last 10 meetings against The Citadel.

Saturday’s game will be broadcast on ESPN+/Nexstar (ABC Tri-Cities) with the team of Pete Yanity (play-by-play) and Todd Agne (analyst) providing the call.