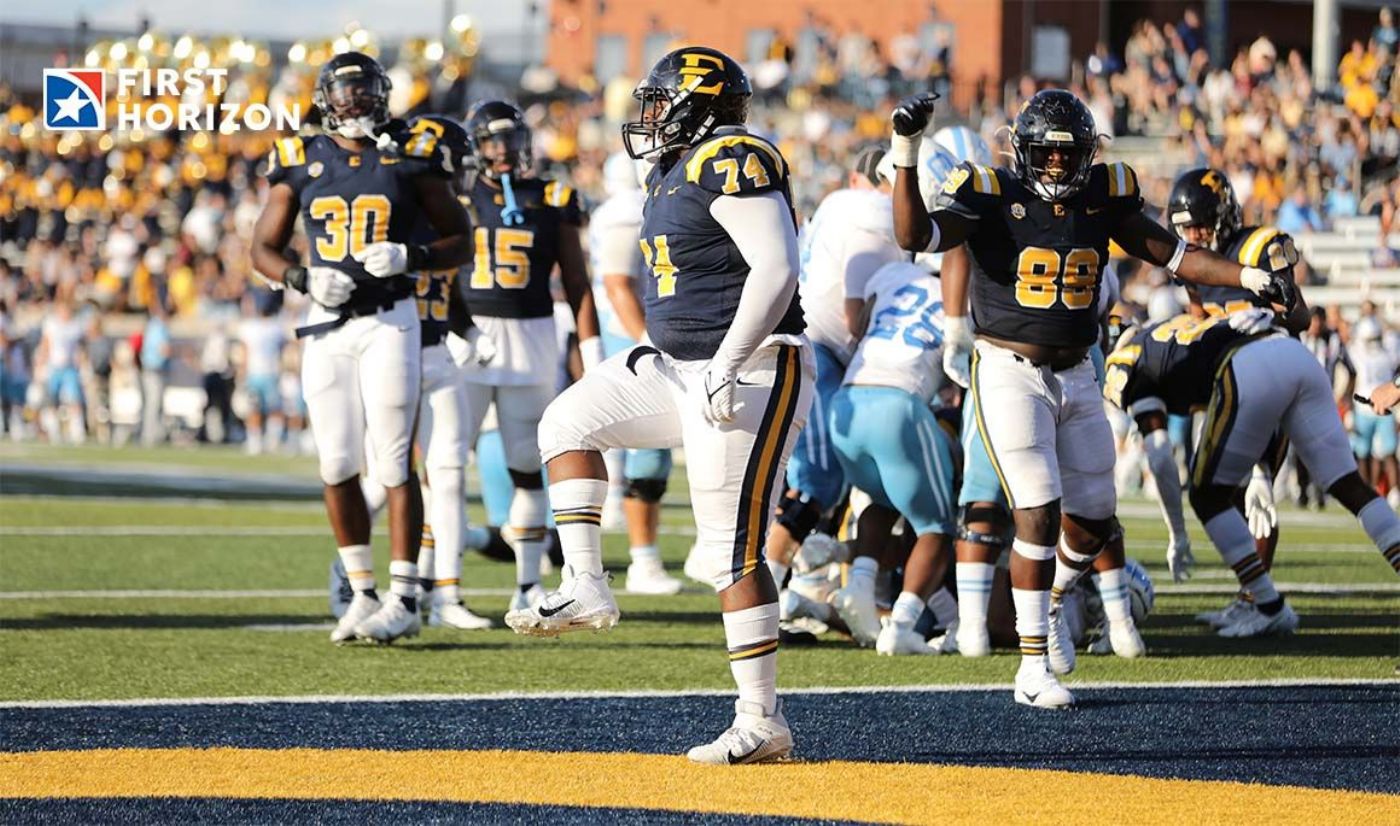 CHATTANOOGA, Tenn. (Oct. 15, 2021) – The quest for 7-0 has to go through the enemy territory of in-state rival, Chattanooga. The Bucs are poised and ready for the challenge against their conference foes, with hopes of returning the Rail Rivalry trophy to Johnson City. Kickoff between the two foes will be on Saturday at 1:30 p.m. at Finley Stadium in downtown Chattanooga.

Quest for the Best
The Bucs continue to match their best starts in program history after improving to 6-0 on the season following the 48-21 domination over The Citadel. ETSU matched the 1969 and 1936 teams with the 6-0 start for the third time in program history. Now the Bucs are on a mission to achieve something never done before in ETSU history - the perfect 7-0 start. ETSU will have to achieve the feat in enemy territory, taking the challenge to Chattanooga, Tenn. for a head-to-head showdown against the Mocs. The Bucs have had two close calls this season but have also had four blow-out victories and the Blue & Gold look primed and ready for the latter.

The Rail
The two teams will be competing for The Rail Rivalry trophy that was introduced in the 2018 season with the Bucs claiming the trophy. The trophy stands as a symbol of the heritage of both cities’ history in the railroad industry. The trophy is made from a former piece of railroad that once connected Johnson City and Chattanooga and weighs 108 pounds which represents the halfway point of the 216 miles that separate the two cities. The trophy also measures five feet, seven inches in length, representing the 57 years since the team’s first meeting in 1961 when the trophy was introduced during the 2018 campaign. The Bucs claimed the first Rail Rivalry meeting, upsetting then No. 24/20 Chattanooga at Greene Stadium by the final score of 17-14. However, the Mocs secured their first victory in the Rail Rivalry in 2019 with a 16-13 win over the Bucs.

Revenge on our Mind
The Bucs will look to avenge a disappointing 16-13 loss the last time these two squads met in Chattanooga. ETSU struggled to get the ball moving with only 272 yards of offense. The Buccaneer defense held the Mocs in check for the most part, despite allowing Ailym Ford to run free for 200 yards on 31 carries with two scores. ETSU’s big take from the game was the emergence of Will Huzzie as a premier threat down the field, making the one-handed catch that was heard all throughout the sports world. Thanks to that catch and very poor kicking by the Mocs’s field goal unit, the game remained a nailbiter. Unfortunately, Victor Ulmo connected when it counted. The Chattanooga place kicker missed one extra point and three field goals before connecting for a game-winning 30-yard attempt. The Mocs opted out of the 2021 spring season, adding to the bad taste in the Buccaneer mouths as a matchup with the Mocs could have resulted in a spot in the FCS playoffs. Needless to say, a lot is on the line this week at Finley Stadium with the Bucs out to claim another victory.

Put em on the Board
The Bucs have put points on the board like nobody’s business! Through six games of action, ETSU has scored a grand total of 236 points, the most points scored in the first six games in program history! The next closest total was 212 points accumulated in 1996. Another fun note found by the legendary Kevin Brown (ETSU Head SID), is that in all of our previous 86 seasons of football, the Bucs have only scored more than 236 points 13 times. Needless to say, this ETSU offense is explosive and dangerous, looking to do damage against whomever stands in the way.

Matching up with the Mocs
Chattanooga enters the game with a 2-3 record, including 1-1 in league action after suffering a 37-34 setback at VMI on Oct. 9. The Mocs are 1-1 when playing at Finley Stadium, with a win over Western Carolina (45-17) and a season-opening loss against then No. 20 Austin Peay (30-20). Chattanooga is led by its prominent back, Ailym Ford who has 494 rushing yards and five touchdowns, averaging 98.8 yards per game. Cole Copeland is the starting quarterback for the Mocs with 697 passing yards on 66 completions. Chattanooga as a team is scoring 28.4 points per game, while yielding 22.4. Ty Boeck is the man to watch on defense with 49 total tackles, including 5.0 tackles for loss and 2.0 sacks. Devonnsha Maxwell has emerged onto the scene with 12 tackles in three games, including 4.5 sacks.

Series History
The Rivalry extends back to 1961 and has proven to be a staple in the Southern Conference. Neither team has truly run away from one another in this rivalry. The Mocs cling to a 23-19-1 advantage in the all-time series, following their recent 16-13 win over ETSU in 2019. In the last 10 meetings, Chattanooga holds a slight 6-4 advantage. When playing the contest in Chattanooga, Tenn., the Mocs hold a 15-8 mark over the Bucs. The Blue & Gold’s last win in Chattanooga fell on Nov. 11, 2000 when the Bucs handed the Mocs a 24-22 defeat. As mentioned earlier, neither team really gains a lengthy advantage, with ETSU’s five-game winning streak from 1992-96 marking the longest winning streak by either team in the history of the rivalry. Chattanooga’s longest streak was a four-game streak from 1980-83.

Saturday’s game will be broadcast on ESPN+/Nexstar (ABC Tri-Cities) with the team of Pete Yanity (play-by-play) and Jared Singleton (analyst) providing the call.