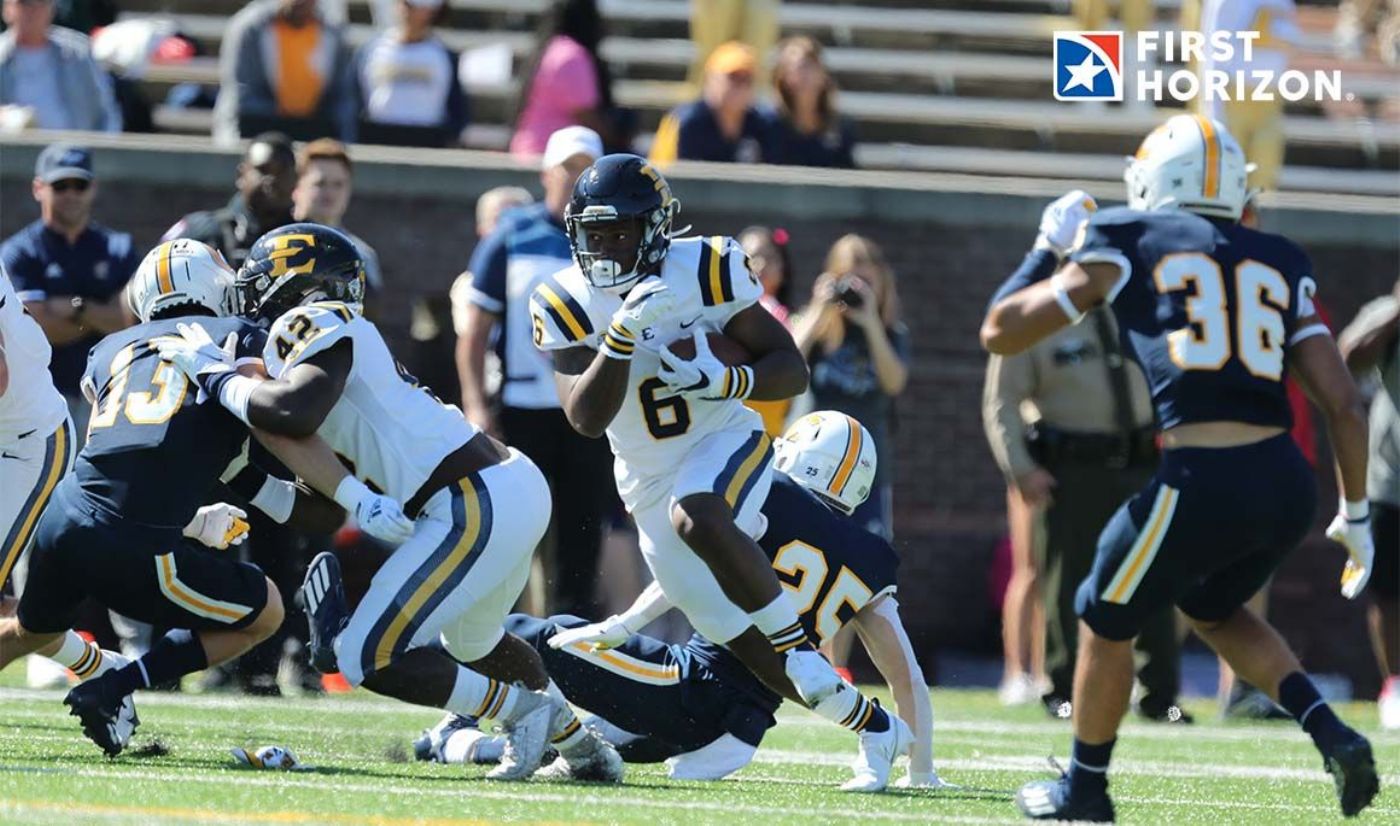 ETSU to square off against Paladins in Greenville

GREENVILLE, S.C. (Oct. 22, 2021) – The Bucs are out looking for revenge following Saturday’s loss at Chattanooga. The Blue & Gold have the Paladins lined up in the crosshairs as ETSU travels to Greenville, S.C. for a showdown against Furman on Saturday at 2 p.m. at Paladins Stadium.

Back in Form
Nate Adkins has reemerged as a strong target for the Bucs this season. The two-time SoCon All-Conference honoree has hauled in 17 catches for 186 yards and one touchdown. His 17 receptions rank third on the squad and are the most since his 2019 season in which he tallied 25 catches for 241 yards. Adkins battled through injuries during the 2021 spring campaign with just 10 receptions for 101 yards. The old Adkins is back and is dominating in the receiving game as well as being featured as one of the premier blockers in ETSU’s established run game.

Up for Grabs
Despite ETSU’s loss to Chattanooga, the league title remains up for grabs after VMI’s throttling win over Mercer and Furman’s triumph over The Citadel. The Bucs, Keydets and Bears are tied atop the league standings with a 3-1 SoCon record, with Furman (2-1) and Chattanooga (2-1) right on the tails. The Bucs will look to pick up a critical win this weekend as they head into their bye week. ETSU will close the season out with VMI (home), Western Carolina (away) and Mercer (home) to set up for a dramatic ending to the 2021 regular season.

Porter’s Sacked Lunch
The Bucs have seen an emergence out of Jalen Porter, filling in for the injured Blake Bockrath this season. The redshirt-sophomore linebacker leads the team in tackles for loss (10.0) and sacks (6.0). Porter has averaged 0.86 sacks per game (second in the SoCon) and 1.43 tackles for loss (also second in the league). Porter’s 10.0 tackles for loss is the first since 2019 when Nasir Player finished with 10.0 tackles for loss and 4.5 sacks. Porter is only the seventh Buccaneer since football resumed in 2015 to have tallied 6.0 sacks or more in a season. Both Nasir Player (2017 & 2018) and Jason Maduafokwa (2016 & 2018) achieved this feat twice.

Pairing up with the Paladins
The Paladins enter the weekend showdown with new life after starting league play with an 0-1 mark. Furman is coming off winning the “South Carolina State Title” with a 42-20 win over Wofford (Oct. 9) followed by a 24-14 triumph over The Citadel (Oct. 16). The Paladins are 4-2 on the season and 2-1 in SoCon action ahead of Saturday’s game. Furman has scored 131 points (21.8 avg.) and yielded 121 points (20.2 avg.), setting up for close games down the stretch. The Paladins have been led in the ground game by Devin Wynn with 429 yards rushing on 86 carries with four touchdowns. Wynn is averaging 85.8 rushing yards per outing and 5.0 yards per carry. Coach Hendrix seems to split time among the quarterbacks with Hamp Sisson having logged 785 yards and four touchdowns, while Jace Wilson has tossed the ball for 333 yards and two scores. Hugh Ryan anchors the team in tackles with 31, followed by Travis Blackshear (26) and Dan Scianna (25). Blackshear is a prominent force on the defensive side of the ball with four interceptions, one forced fumble and one fumble recovery.

The broadcast team of Jay Sandos, color analyst Robert Harper, along with studio hosts Mike Gallagher and Don Helman will provide ETSU fans all the information they need to complement their game-day activities.

Saturday’s game will be broadcast on ESPN+ with the team of Bryant Lambert (play-by-play) and Cole Neely (analyst) providing the call.