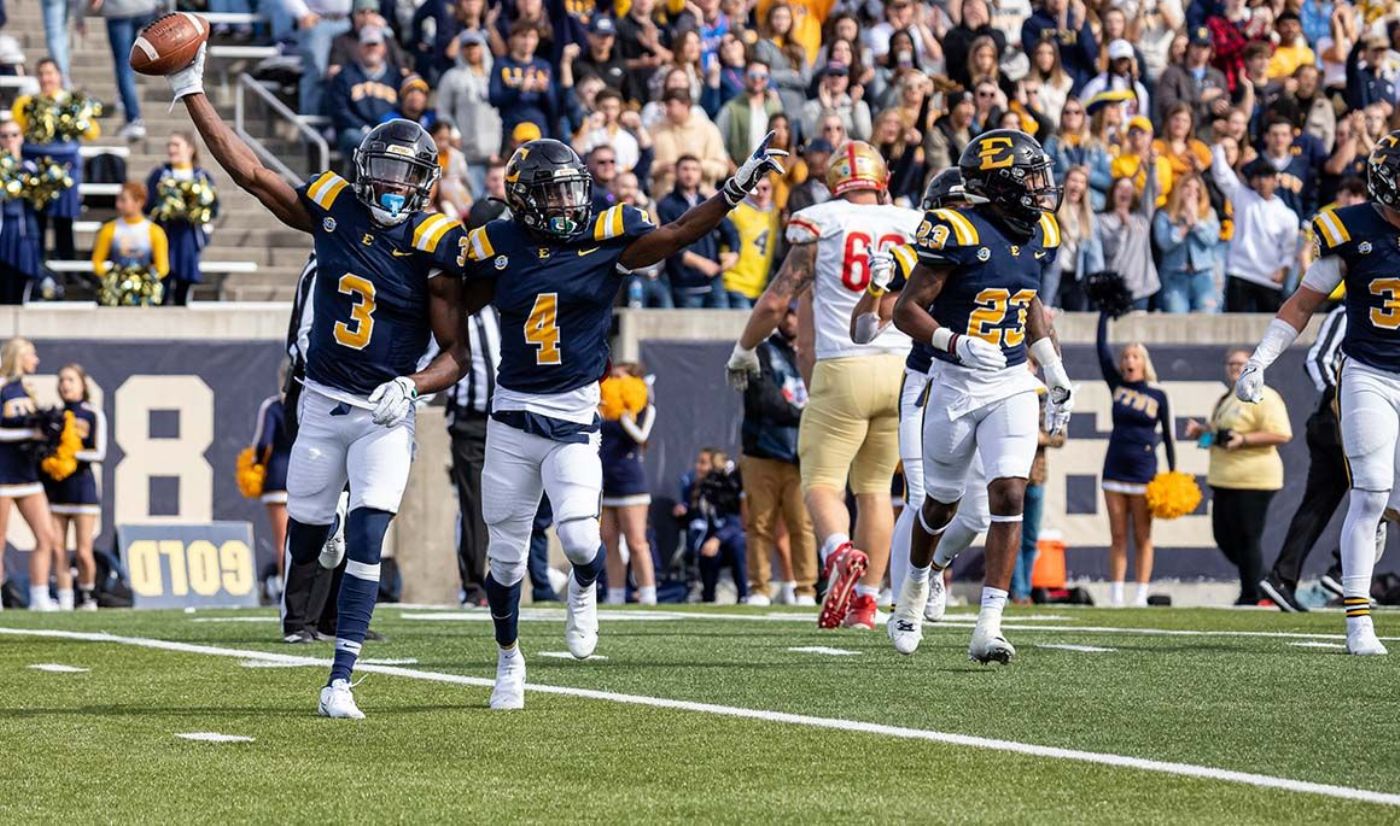 JOHNSON CITY, Tenn. (Nov. 6, 2021) – The notion of “defense wins championship” is coming to fruition in Johnson City as ETSU forced three turnovers en route to a 27-20 win over 18th-ranked VMI on Saturday afternoon at William B. Greene, Jr. Stadium. With the win, the 14th-ranked Buccaneers improve to 8-1 on the season, including 5-1 in league play to sit atop the Southern Conference standings with both Chattanooga and Mercer.

It was another record-setting crowd on hand at Greene Stadium as ETSU welcomed 10,416 patrons into the facility, the third time that the Bucs have broken an attendance record at home this season. More importantly, ETSU is 3-0 in said games and 5-0 at home.

The Buccaneer defense forced three turnovers, all in the first quarter, as the Bucs used the blunders and momentum to jump out to a 21-0 advantage. ETSU’s defense would bend, but not break, holding VMI to just 20 points, a team that averaged 33.6 points per game coming into Saturday’s game. The Bucs were led in tackles by Donovan Manuel (Ellenwood, Ga.) who had a career-high 16 tackles, including one sack on the afternoon. Fresh off a career-best performance at Furman, Zach West (Boone, N.C.) concluded the game with a personal-best eight tackles. Both Jared Folks (Harrisburg, Pa.) and Zion Alexander (Norcross, Ga.) came up with key interceptions, while Tyree Robinson (Gainesville, Ga.) scooped up a fumble to halt a VMI drive deep into ETSU territory.

On a day where the passing game sputtered at times, the Bucs were able to depend on the ever-reliable ground game. Quay Holmes (Powder Springs, Ga.) capped off the game with 161 yards on 21 carries and two touchdowns. Meanwhile, Jacob Saylors (Jasper, Tenn.) added 85 yards on the ground and 50 yards in the return game. Tyler Riddell (Tampa, Fla.) threw for 130 yards and one touchdown, including connecting three times for 85 yards with Will Huzzie (Duluth, Ga.).

NEXT GAME UP
The Bucs will hit the road for one final time in the regular season, traveling to Cullowhee, N.C. to take on Western Carolina at 2 p.m. in the Blue Ridge Border Battle.