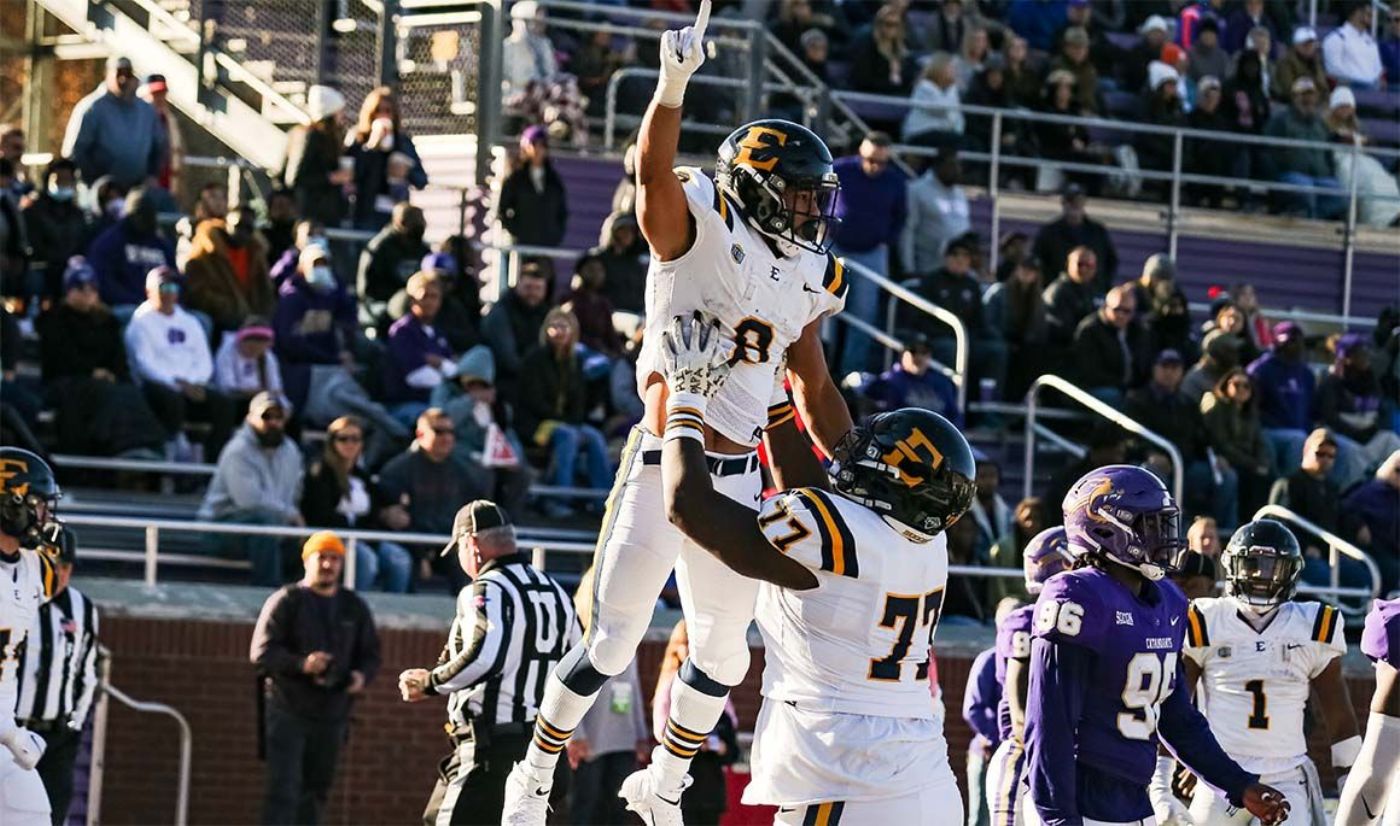 CULLOWHEE, N.C. (Nov. 13, 2021) – The Buccaneer football team continued its step in the direction of a Southern Conference regular season title on Saturday with a thrilling 56-35 victory over Western Carolina in Cullowhee, N.C. With the win, the Bucs retain the Blue Ridge Border Battle trophy, becoming the first team in the rivalry to do so.

ETSU improves to 9-1 on the season, including 6-1 in SoCon action to sit atop the league standings with Mercer. Following the loss, Western Carolina falls to 3-7 on the campaign and 3-4 in league play.

The Buccaneer offense came to play as ETSU ran for a total of 461 yards, including a new single-game program record 266 yards from Jacob Saylors (Jasper, Tenn.). Saylors broke the previous record of 255 set by Quay Holmes (Powder Springs, Ga.) against Mercer on Nov. 16, 2019. Saylors shattered his own personal record of 136 yards by a total of 130 yards and also recorded his first three-touchdown performance in his collegiate career. Not to be outdone, Holmes rushed into the record books needing just one touchdown and one point to pass Brandon Walker in both career categories. The Georgia product finished the game with 212 rushing yards and three touchdowns, bringing his career total to 47 total touchdowns and 282 career points, a new ETSU program record.

The Buccaneer defense was led by Donovan Manuel (Ellenwood, Ga.) with a team-high 15 tackles, followed by nine tackles from Jared Folks (Harrisburg, Pa.). ETSU’s defense struggled in the opening half, allowing 35 points. However, the Buccaneer defense returned to form, pitching a second-half shutout to preserve the win and stop the high-potent Catamount offense. ETSU’s defense forced three turnovers, including a pair of interceptions by Di’Andre Davis (Charlotte, N.C.) and Tyree Robinson (Gainesville, Ga.). Manuel recorded his first fumble of the season and Rodney Wright (Athens, Ga.) picked up his first career fumble in the first half.

NEXT GAME UP
ETSU will close out the 2021 regular season next Saturday with a home battle against Mercer with a winner-take-all showdown. Kickoff at William B. Greene, Jr. Stadium is set for 1 p.m.