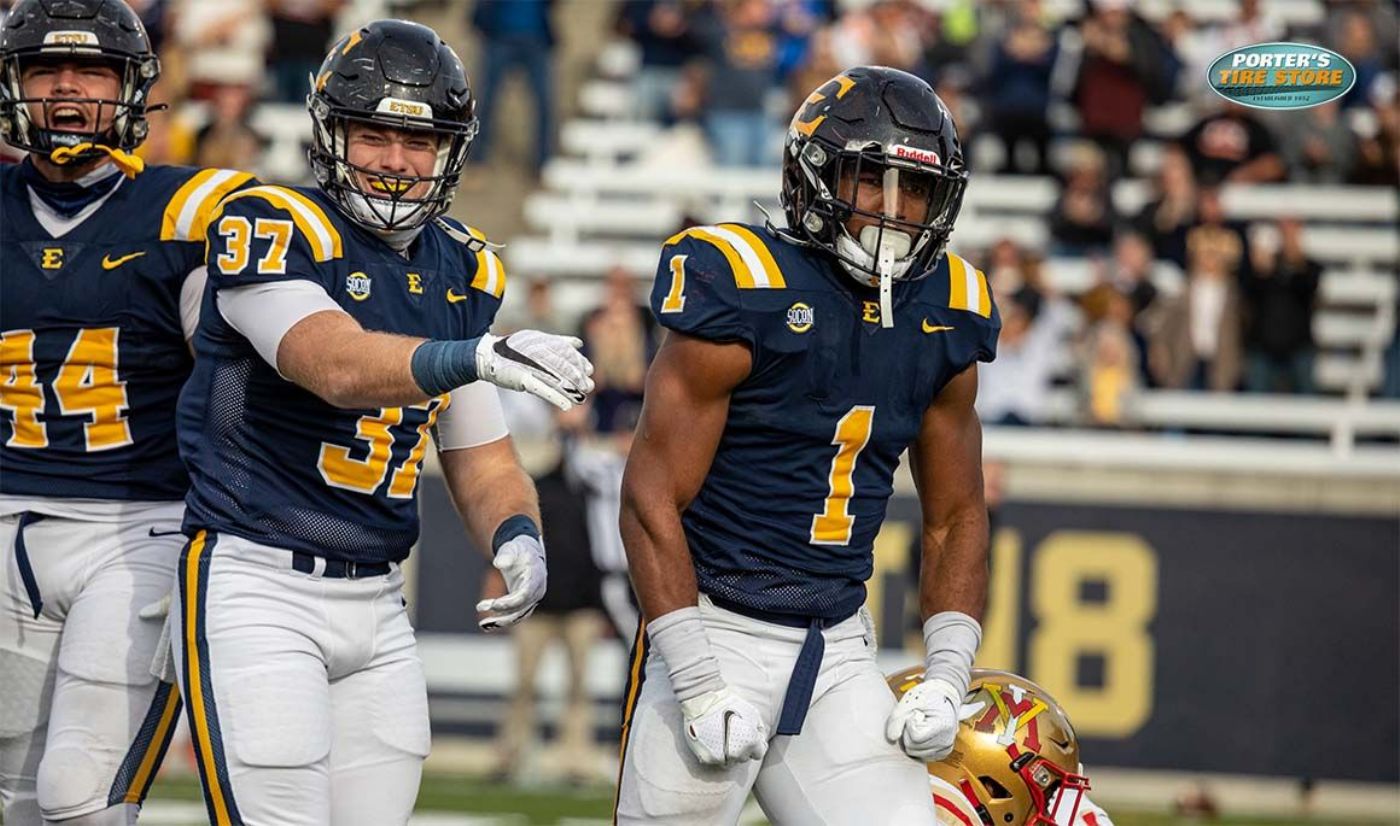 ETSU set to host Mercer in front of home crowd

JOHNSON CITY, Tenn. (Nov. 19, 2021) – Championship Saturday is set! The 8th-ranked Bucs will be playing host to No. 21 Mercer in a winner-take-all game for the 2021 Southern Conference title with a spot as the automatic qualifier in the FCS playoffs on the line.

Championship Saturday
It doesn’t get much bigger in the scheme of the FCS world than what will be unfolding in Johnson City, Tennessee on Saturday. The 8th-ranked Bucs will be playing host to the 21st-ranked Mercer Bears in a winner-take-all Southern Conference title game. The Bucs have had quite the journey in getting to this point, setting the tempo for the season with a season-opening 23-3 win at Vanderbilt. The Bucs have reached nine wins for just the third time in program history and have a chance to match a program-record 10th win on Saturday. A win on Saturday would mark the second SoCon Championship in the four years that Randy Sanders has been at the helm of the program. ETSU is looking for its second FCS playoff appearance since the return of football and its second SoCon Championship in program history. Standing in there way, a Mercer squad that is 7-2 and 6-1 in league play. The Bears have not played the prettiest football at times, but they have consistently found ways to win, including knocking off Chattanooga by the score of 10-6 last weekend, setting up the de facto title game. A Mercer win would give the Bears their first SoCon title in program history.

What Happened in the Whee?
The Bucs and Catamounts traded blows in the first half, heading into the locker room knotted at 35 apiece. ETSU then woke up, pitching a second-half shutout en route to a 56-35 victory in the Blue Ridge Border Battle. ETSU posted some notable stats from the monumental win, most notably Jacob Saylors setting the new single-game rushing record with 266 yards on 19 carries. Quay Holmes added 212 yards on the ground and broke the program’s career touchdowns record (previously 44) and the career scoring record (previously 264). Both records were held by ETSU Hall of Famer Brandon Walker. Holmes now has 47 career touchdowns and 282 career points. The Georgia native is chasing another record of Walker’s, but more on that later. Saylors and Holmes became the first duo in ETSU history to rush for 200 yards each in a single game, while also becoming just the second set of running backs in SoCon HISTORY to rush for 200 apiece - Jayson Foster (253) and Lamar Lewis (206) did so for Georgia Southern in 2007 against Coastal Carolina. The 461 team rushing yards is the second-most in FCS this season, while also marking the most against a Division I opponent this year. Saylors accounted for 337 all-purpose yards, the most in FCS football this year and second-most in all of college football. ETSU scored 56 points (most since return of football) and tied a program record for rushing touchdowns in a game (7) and total touchdowns (8). Tyler Keltner tied a program record for the most PATs in a game with eight, while the Bucs also set a new program record for rushing touchdowns in a single season with 29.

What to Watch for
There will be several numerical storylines heading into Saturday, most notably Quay Holmes as he approaches the all-time rushing record. Mr. Hollywood needs just 26 yards to break George Searcy’s single-season rushing record of 1,324 and he is just 86 yards shy of breaking Brandon Walker’s all-time rushing record of 4,095 yards. Jacob Saylors needs just 68 yards to reach 1,000 yards this season for the first time in his career. Should he do so, Saylors and Holmes would mark the first pair of 1,000-yard rushers in a single season in ETSU history and just the 12th duo in SoCon history. The duo combined need 25 total yards of offense to reach a combined 10,000 all-purpose yards! Tyler Keltner needs to bury one field goal to tie Jerry Chapman for second all-time with 37. Will Huzzie is on a watch list of his own, needing five receptions to pass Cedric Solomon (97) for 10th all time, 54 yards to pass Dennis Law (1,376) for 10th all-time. He also needs eight catches to jump into 10th for single season receptions and 106 yards to climb into 10th for single-season receiving yards. The Bucs are also 27 points shy of 379 points, which would set a new program single-season record - currently held by the 1996 team with 378.

Battling the Bears
Mercer will prove to be a tough test as the 21st-ranked Bears enter the weekend with a 7-2 overall record, including 6-1 in league play. The six conference wins is the most in the program’s history. Mercer is coming off a 10-6 triumph over Chattanooga, forcing five turnovers by the Mocs. The Bears have a three-game winning streak coming into Saturday’s tilt. Mercer is led in the ground game by Fred Davis with 12 rushing touchdowns to go along with 776 yards. Mercer is scoring 31.3 points per game, while allowing 21.0 per outing. Fred Payton is the man behind center, logging 10 passing touchdowns and 1,286 yards.

Series History
The all-time series is tied at three apiece, with Mercer claiming the last meeting in Macon by the final of 21-13 earlier this spring. The Bucs are out for revenge after the loss to the Bears took ETSU out of playoff contention in the spring. The Bucs are 2-0 all-time when playing in Johnson City. The last time these two squads met at Greene Stadium resulted in a 38-33 win for the good guys as Quay Holmes rushed for a then-record 255 yards.

Saturday’s game will be broadcast on ESPN3 with the team of Mike Gallagher (play-by-play) and Mark Hutsell (analyst) providing the call this weekend.